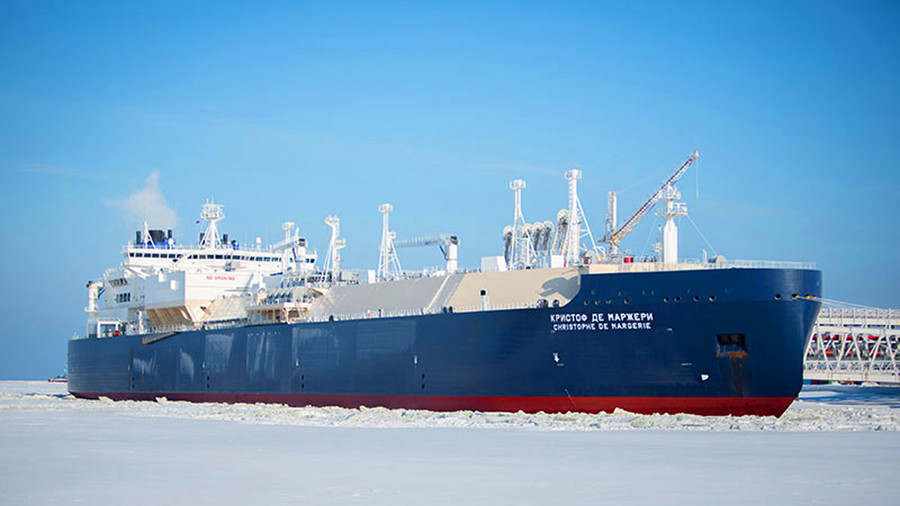 Russian tanker Christophe de Margerie has brought the first batch of liquefied natural gas (LNG) from Yamal to the United Kingdom. London had to urgently turn to Russian gas targeted by US sanctions due to supply outages.

A global positioning service puts the tanker in Harwich on Wednesday, although it had previously shown the ship was heading for the Isle of Grain port in Kent, where there is a regasification terminal.

Earlier this month, Novatek, one of the largest Russian gas producers, said that it sold the cargo of 170,000 cubic meters of LNG to Petronas LNG UK Limited (PLUK), the UK branch of Malaysia’s Petronas.

Yamal LNG, located in the Russian Arctic, is a joint project of Russia’s Novatek, France’s Total, China National Petroleum Corporation and the Silk Road Fund. Novatek holds a 50.1 percent share in the project. Its partners own 20 percent, 20 percent, and 9.9 percent respectively.

The UK was forced to turn to Russia due to shortages in gas supplies and a deep freeze that settled over the country at the time. Temperatures in central England fell to minus 13 degrees Celsius, which is nearly 15 degrees colder than the usual average December low.

The UK suffered gas shortages after the shutdown of the North Sea’s most crucial fuel transport route. Ineos, a private company which owns a key refinery near Aberdeen, said it found a crack in a vital 42-year-old oil and gas pipeline. The firm said that it would take two weeks to fix it.

The gas that came in from the cold: Britain turns to sanctioned Russian energy to avoid big freeze https://t.co/hQniJpFMYl pic.twitter.com/hRuKBYREOB

The Yamal project is not directly sanctioned by the EU, but in support of US sanctions Brussels and London have imposed various restrictions on Russia that deprive its energy companies of finance and technology. The measures inevitably affect innovation and the development of new fields and supply mechanisms, which may ultimately compromise Russia’s ability to deliver gas to the rest of Europe.

The ice-breaking tanker is named after the former CEO of Total Christophe de Margerie who died in a plane crash in Russia. The tanker can carry up to 173,000 cubic meters of LNG.