15 year-old Nadi could barely speak when RT crew met her just a few hours after she was bought out after years of slavery for $2,500 – not the highest ransom by far, as ISIS terrorists fetch $10,000 on average for young Yazidi girls. 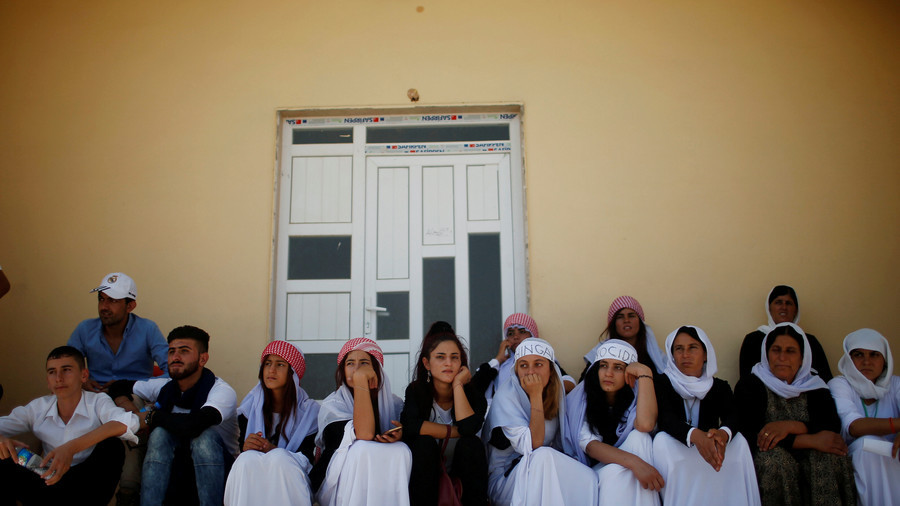 Nadi is one of thousands of Yazidi girls, captured and then enslaved by Islamic State (IS, formerly ISIS) terrorists who would turn the girls – often no older than 10 years – into forced laborers, sex slaves, and send them on suicide missions. With the self-proclaimed IS caliphate crumbling, the slave trade has become a source of income for the retreating militants in need of money to flee the battlefield and resettle in nearby countries.

The girl was kidnapped in 2015 in Mosul – then a major IS stronghold in Iraq – where the group’s mastermind, Abu Bakr al-Baghdadi, declared a self-styled terrorist caliphate in June 2014. Though Mosul was “liberated” in July, Nadi’s long journey home ended just two hours before RT’s Murad Gazdiev spoke to her in Baghdad.

Asked how she feels now that her horrific ordeal is over, Nadi, still visibly shaken but already smiling, said “good, thank God.” She was rescued by a group of local men who track down Yazidi girls taken captive by ISIS and try to bring them back by either negotiating a price with the militants or stealing them.

Nadi’s family forked out $2,500, which was handed over to the militants in a clandestine exchange operation with no law enforcement involved as militants threaten to kill the captives if they are exposed.

“ISIS say that if we show the girls still in their possession – or if their relatives appear on TV – the deal will be off. That they’ll kill their hostages,” a man involved in the rescue told RT.

Despite all the difficulties and controversy, deals are still being struck with the terrorists, as remnants of ISIS are in desperate need of money and the relatives of the girls do not have much hope of ever seeing them again otherwise.

“When ISIS fighters flee to Turkey – they sell their slaves because they need money to go back to their home countries,” the man said.

Yazidi girls are treated by jihadists as human commodities that could be easily sold or given away as presents. A man, who preferred to stay anonymous, told RT that he knows several girls as young as 10, 11, and 12 who were “all raped” by the militants and “were gifted or sold as

The price tags militants put on the abducted girls and women ranges from a few thousand to tens of thousands of dollars. “If they’re in a dangerous place – it can be 80 thousand dollars. Otherwise, around 10-15 thousand,” he said.

There are nearly 3,000 Yazidis that are still missing with their fate unknown according to Vian Dakhil, Yazidi Member of the Council of Representatives of Iraq, which has gained prominence for leading rescue efforts on behalf of Iraqi MPs. Dakhil would sometimes pay ransom with her own money, saying that no amount of money is worth more than a life.

“I was stunned by the tragedy of the Yazidi people,” she told RT. She recalled the story of a 12-year-old sex slave girl, who drugged her ISIS captors with sleeping pills and walked with her aunt 30km before they were rescued. “Yazidi women have incredible inner strength. At first I could not believe how they could endure all of this.”