The US is Aiding a Genocide by Mass Starvation in Yemen 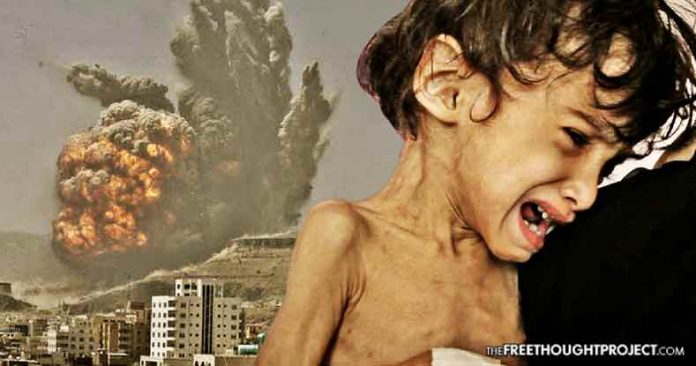 The US is Aiding a Genocide by Mass Starvation in Yemen

António Guterres, the Secretary-General of the United Nations, urged countries across the world to lend financial assistance to Yemen during a conference on Tuesday regarding the country’s humanitarian crisis. “We are witnessing the starving and the crippling of an entire generation,” Guterres said. “We must act now to save lives.” The Washington Post reported that their fundraising effort has raised $1.1 billion so far out of the $2.1 billion sought by the U.N.

A statement from Unicef  and the World Food Programme released on Monday highlighted the increasing hunger epidemic in Yemen, with close to 2.2 million malnourished and 7 million people “not knowing where their next meal will come from and in desperate need of food assistance.”

“If we act now, many lives could be saved in Yemen. We call on the international community to urgently provide us with sufficient funding and to help us avert famine across Yemen,” said WFP’s Muhannad Hadi, according to the statement.

While Unicef’s statement and much of the mainstream media has called much-needed attention to the horrifying situation in Yemen, these reports have failed to address the United States’ role in Yemen’s plight. The media has instead chosen to use vague terminology such as “ongoing violence” and “administrative blockages” without taking a deeper look into the policies of our government that have lent support to unconscionable treatment of civilians in Yemen.

ABC News touched upon the issue of hundreds of attacks in the country, while Unicef’s statement noted that “violence has made large parts of the country inaccessible to humanitarian workers, cutting off vulnerable children and families from urgently needed aid.” To understand why Yemen is in such peril, it’s critical to look further into the United States’ tangled web of foreign policy and how it affects this region.

Gareth Porter, an investigative journalist, historian and analyst who has provided ample coverage of issues in the Middle East, wrote that the Saudi coalition has wreaked havoc upon Yemen civilians through a “war strategy of maximizing pressure on the Houthi resistance by destroying agricultural, health and transportation infrastructure and by choking off access to food and fuel for most of Yemen’s population.” At the same time, the United States has “played a crucial role in enabling the Saudi strategy responsible” for the crisis faced in Yemen today:

“The United States has enabled the Saudis to pursue that strategy by refueling the Saudi-led coalition planes bombing Yemen and selling the bombs. Equally important, however, the US has provided the political-diplomatic cover that the Saudis need to carry out this ruthless endeavor without massive international blowback.

Porter wrote that the United States favors its relations with Saudi Arabia despite their unspeakable acts of violence toward civilians. He went on to point out that in 2015, the U.N. security council had called for “humanitarian pauses” in their resolution on Yemen.

Following strong objections from the Saudis among other coalitions, that mandate was removed from the resolution. The Saudis, according to Porter, went on to execute a strategy that “included not only bombing raids that targeted Yemen’s fragile infrastructure for transportation, food production and medical care, but a naval blockade, ostensibly to prevent any arms from reaching Yemen, but also clearly intended to limit severely the population’s access to foodstuffs and fuel.”

READ MORE:  Saudi Arabia Threatens to Crash the Dollar if Congress Exposes their Role in 9/11 Attacks

In February 2016, the UN Security Council reportedly held several meetings regarding supplying humanitarian provisions such as food and water to Syria and Yemen; while the council sought to ensure providing “humanitarian access” to these countries, the Saudis objected once again and successfully put those initiatives to a halt.

According to Porter, the Saudis have executed a vast number of violent tactics which have led to tremendous suffering among the people of Yemen, and the Obama administration was complicit.

Now, under the Trump administration, U.S. arms sales to Saudi Arabia are expected and Defense Secretary James Mattis is eager to increase its support for the Saudi coalition and has “all but pledged additional support for the Saudi-led fight in Yemen this week” according to a report from The Hill.