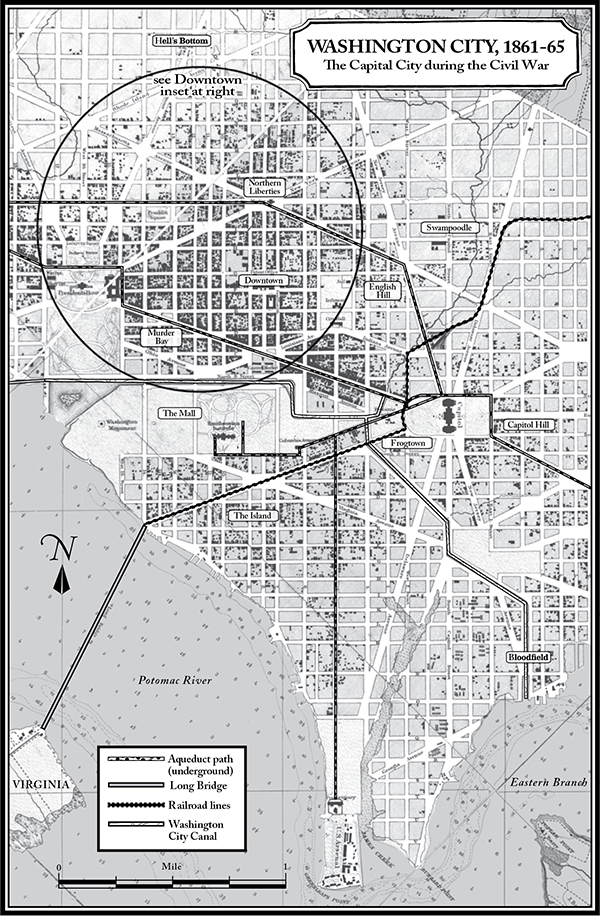 A close up of the Washington Aqueduct tunnels in downtown Washington. Note they pass straight through the White House. 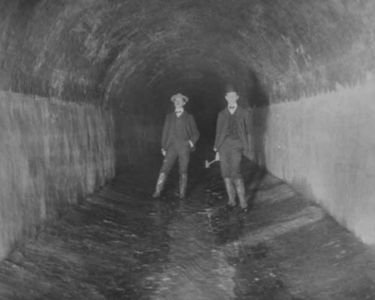 The Origin of Washington’s Water Supply ? Architect of the Capital

Note that just before the aqueduct crosses Rock Creek it branches off left into Georgetown.

1864 | Reference
A close up of the Washington Aqueduct tunnels in downtown Washington. Note they pass straight through the White House.

The conduit is the largest structure of the water system. It stretches almost 12 miles downriver from the intake at Great Falls to the Georgetown Reservoir. The circular tube, built of brick, stone and mortar, is 9 feet in diameter. It was constructed by tunneling and by deep rock cuts. A road was built parallel to the conduit to facilitate cleaning repairs and inspections. The road was originally named Conduit Road, today it is MacArthur Boulevard.

The Washington Aqueduct | YouTube
This short documentary talks about only 1 conduit used at a time. We only see the conduit down as far as Georgetown Reservoir.
Cities of the Underworld – Washington DC: Seat of Power | YouTube
This documentary give a good insight into the what the tunnels look like under DC.

The Washington (Lydecker) Tunnel, completed in 1901 by the Army Corps of Engineers, is up to 10 meters in diameter and runs 4 miles from Georgetown Reservoir to McMillain Reservoir. Shortly after in 1926 a second tunnel was dug beside it.
The Lydecker Tunnel Fiasco | Architect of the Capital

The Washington Post describes the reality: “A committee of experts went through the tunnel and found that instead of a solid lining, thousands and thousands of feet of the tunnel contained nothing more than a brick arch, with spaces between the sides and the top of the arch and the original rock large enough to drive a coach through.”

This map shows the proposed route of the Washington Tunnel.

1883 | Reference | Original
This map shows the water distribution network for Washington DC. The Washington Tunnel is the red broken line running left across the map from McMillan Reservoir. The old Washington Aqueduct conduit is also shown in solid red lines.

The Army Corps added the McMillan Park Reservoir and the Washington City Tunnel (10 meters in diameter and 4 miles long) between 1882 and 1902.

A second tunnel paralleling the original was completed in 1926 which allowed the Lydecker Tunnel to be periodically closed for routine maintenance without noticeably interrupting water service.

Configuration of the Bedrock Surface of the District of Columbia and Vicinity | usgs.gov
The diagram below shows a cross section of the tunnel. There are several vertical air shafts.

In the Widows Mite air shaft just north of Wyoming Avenue, near the line of Twenty-second Street, the official section shows a capping of “clay and sand 30 feet thick” underlain by 35 feet of “clay,” but this is undoubtedly a mistake, as the gneiss has been revealed by many cellars in this vicinity under only a few feet of terrace gravel and sand. In the air shaft on the highest part of the ridge near the corner of Sand Thirty-fifth Streets the blueprint of the tunnel section shows 42 feet of “clay” lying on “soft rock” at a depth of 158.7 feet, but in fact the rotted bedrock out-cropping extensively in that area is overlain by very thin remnants of terrace gravel at 195 feet above sea level. Probably the clay referred to is mostly rctten rock.

Merging the two maps produced this.

These are approximated positions based on the maps.

Harrison G. Dyar (Mole Man) 1900 – 1916
I’ve included Harrison Dyar to show some example of the tunnels in central Washingtpn DC. This is a tunnel we know about on P Street, NW. This tunnel is highlighted in green on the map above.
Smithsonian Bug Expert By Day; Eccentric Tunnel Digger By Night | Architect of the Capital

2 – 1512 P 21st St – Washington Post
In the articles they talk about these various locations:

while working on the foundation for the luxurious Pelham Courts apartments in Dupont Circle, workers made an unusual discovery: “Workmen find tunnel The passage is more than 100 feet long. (Washington Post, 5/19/1917)”
So do the tunnels themselves, which fan out as far as 200 feet behind his old Dupont Circle home, though they’re now sealed with concrete.
The Pelham Courts of Dupont Circle are long gone, and the property now houses the Hotel Palomar. Reference

“Washington was alive with stories of mystery, intrigue, romance, and adventure.” (Post, 3/4/1942)
While driving behind Pelham Courts in mid-September of 1924, a truck’s tires sank into the ground, revealing the entrance to a hidden underground shaft. Reference

I conclude from my research there are many tunnels under Washington DC. The ones outlined above are ones we know about. Some are as old as 1850s. As demand for water increased they built new tunnels and laid new pipes. The older tunnels being left to decay.
Interestingly here are 4 properties that sit directly on top of the old aqueduct tunnels. Most of the properties in Washington sit above some form of a tunnel or another but it seemed quite a coincidence that the only map I could find of the aqueduct system of tunnels was from 1900s and Alefanis etc have properties either very close or right on top of them. The articles point out the tunnels aren’t that far from the surface so digging down from any building wouldn’t be a great challenge. You would just need to know where to dig.