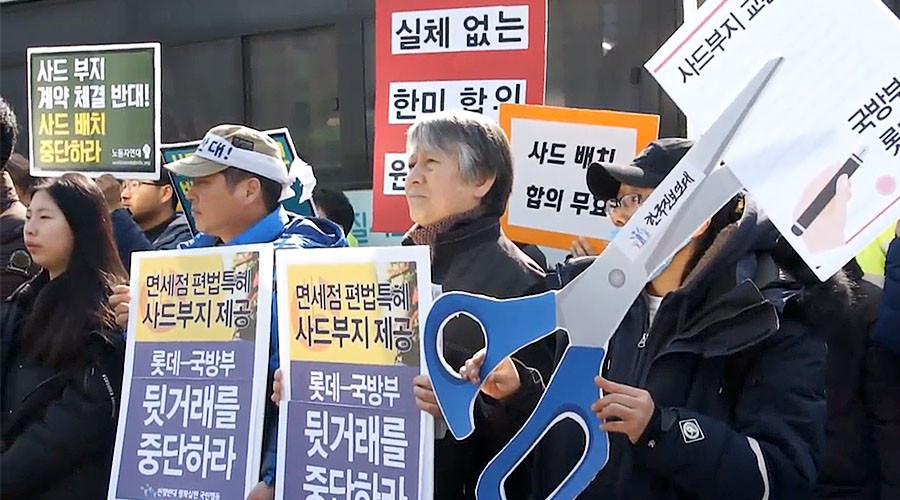 South Koreans have staged a protest against a land-swap deal which will see their country host the controversial US defense missile system THAAD. Some living near the host site have also filed a lawsuit against the Defense Ministry, according to attorneys.

Demonstrators holding signs and chanting slogans gathered in front of the Seoul headquarters of retail giant Lotte on Tuesday to protest its deal with the South Korean government.

The agreement, signed between the two sides on Tuesday, will see the company trade its golf course for military-owned land near the capital, with the golf course becoming the future home of the Terminal High Altitude Area Defense (THAAD) system.

The Tuesday protest comes as Yonhap news agency reported that the military would be using helicopters to bring in barbed wire fencing to close off the golf course after weeks of daily protest.

Protest leader Kim Chung-hwan told AFP that hundreds of soldiers and riot police had been deployed to the golf course to guard entrances.

Meanwhile, those living near the golf course have protested by filing a lawsuit against South Korea’s Defense Ministry.

The suit from residents of Seongju county and neighboring Gimcheon accuses the defense ministry of bypassing legally-required procedures, including prior agreement from locals and an environmental impact assessment, according to AFP.

“This is only the beginning of our legal battles to stop this project,” lawyer Kim Yu-Jeong told journalists outside the ministry, where some 40 activists and residents were also holding a demonstration.

The South Korean government reiterated on Tuesday that the deal is aimed at self-defense against Pyongyang.

“We will maintain our principle that the decision for the THAAD installation is a sovereign and self-defense act aimed at protecting the country and its people from North Korea’s nuclear and missile threats,” Foreign Ministry spokesman Cho June-hyuck said, as quoted by Yonhap.

The government also vowed to take necessary steps to prevent South Korean companies from any unfair treatment by China, which has repeatedly spoken out against THAAD, fearing it will undermine its own ballistic capabilities. On Monday, it warned of “consequences” against the US and Seoul if the deal were to be signed by the two parties.

Beijing has already taken what many claim are retaliatory measures, including halting Lotte’s construction of a multibillion dollar real estate project in China.