Typhoon Megi Recap: Taiwan Blasted with Wind Gusts Over 120 mph, Up to 40 Inches of Rain 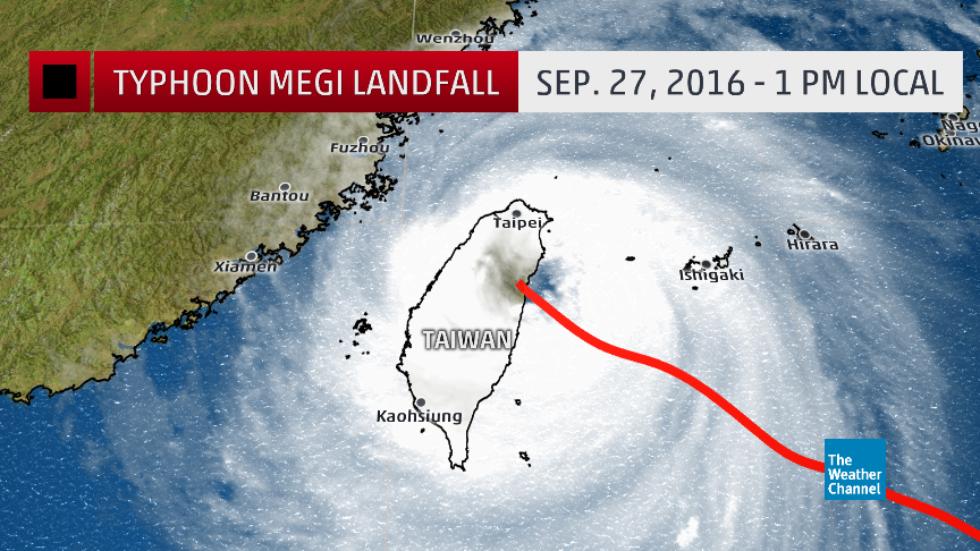 Typhoon Megi Recap: Taiwan Blasted with Wind Gusts Over 120 mph, Up to 40 Inches of Rain

Typhoon Megi made it’s second landfall in China early Wednesday morning with winds at around 75 mph.

Story Highlights
Typhoon Megi crashed ashore in Taiwan on September 27 at Category 4 strength.Megi made its final landfall in southeast China the following morning.Wind gusts over 120 mph and up to 40 inches of rain were measured in Taiwan.

Typhoon Megi made landfall in Taiwan, bringing feet of rain and wind gusts over 100 mph on September 27, then brought high winds and heavy rain to southeast China the following day.

JTWC estimated maximum sustained winds at landfall were 115 knots or roughly 130 mph, the equivalent of a Category 4 tropical cyclone.

Typhoon Megi makes landfall in northeast Taiwan at 1 p.m. local time on September 27, 2016, as the equivalent of a Category 4 storm.

Contrast that view of Megi’s eyewall from typhoon chaser James Reynolds with the view from fellow chaser Josh Morgerman from the eye of Megi.

Megi was the third typhoon to either landfall or brush Taiwan in less than two week’s time, after Malakas passed to the east of the island about 10 days ago, and Meranti hammered the island three days prior to Malakas.

Rain was falling at the rate of over 3 inches per hour, at times, Tuesday.

Tue-Wed rain total of 40.24" (1022 mm) at Taipingshan. Still raining in some parts of #Taiwan on E side of #Megi remnant. pic.twitter.com/pA8fbLxZ0T

Wind gusts clocked as high as 124 mph at Wuqi on Tuesday, according to CWB. Some other notable peak gusts include:

As mentioned earlier, Megi was the fourth typhoon to either brush or make landfall in Taiwan this season, and third to do so in just under two weeks’ time.

Typhoons to either landfall or brush Taiwan in 2016 through September 21, along with dates of their closest approach and intensities.

According to the CWB, 3 to 4 typhoons make landfall or pass close enough to trigger significant impacts on Taiwan each year, on average. August, July, and September, in that order, are the most likely months for typhoons, there.

As many as seven typhoons have struck Taiwan in four separate years, most recently in 2001, according to the CWB.

Megi then made its final landfall in southeast China, near Quanzhou, early Wednesday morning, local time, at Category 1 equivalent strength.

Prior to the Taiwan landfall, Megi rapidly intensified with wind speeds increasing from a 50 mph tropical storm to a 105 mph typhoon in just 24 hours.

On September 26, Megi replaced its eyewall, something common in stronger tropical cyclones, which could be seen from Taiwan’s CWB radar on September 26.

Following that eyewall replacement cycle, Megi reintensified to a Category 4 equivalent storm prior to its Taiwan landfall.

Typhoon #Megi made landfall last night In #Taiwan's Hualien County (@1pm local) with the ferocity of a Category 4 Hurricane. pic.twitter.com/Il2GxgOln4