Deutsche Bank Collapsing? Is This Why Germans Warned to Prepare? (Videos) 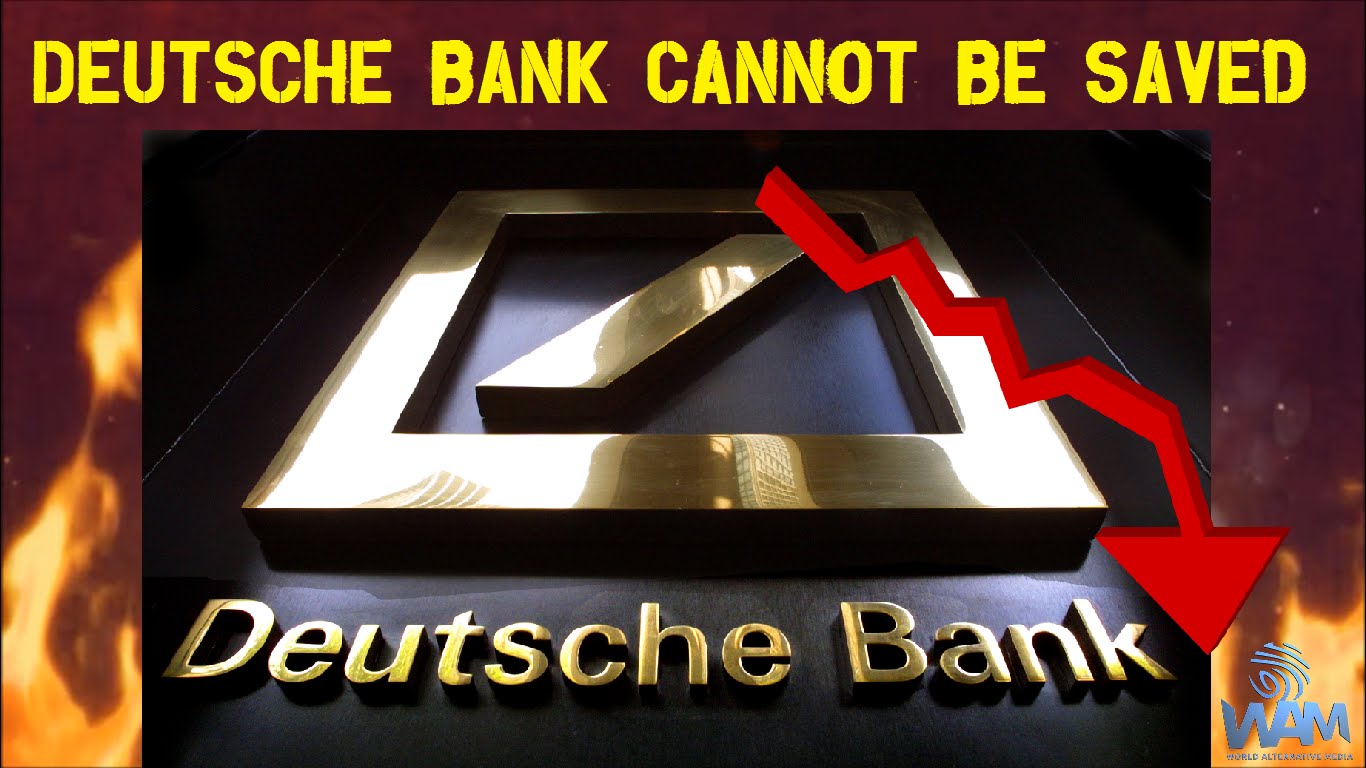 Deutsche Bank Collapsing? Is This Why Germans Warned to Prepare? (Videos)

(N.Morgan) Since Germany issued the dire warning to its citizens to stock up on food and water, it is beginning to look as if Deutsche Bank may be collapsing.

If the leading bank in Germany collapses, the effect on Europe would be devastating, and it would be highly unlikely that the US would remain unscathed by such a collapse.

It would have a ripple effect that would travel all across the Atlantic. The Deutshe Bank’s financial woes are currently stressing the American Stock Market.

Angela Merkel has said that Deutsche Bank will not receive a bailout from the European Central Bank, which is the last resort lender of financial institutions in crisis.

The Department of Justice recently issued a $14 billion fine to the bank to settle a mortgage-backed securities probe, which the bank has no intention of paying.

“Deutsche Bank has no intent to settle these potential civil claims anywhere near the number cited,” the company said in a statement early Friday in Frankfurt.

“The negotiations are only just beginning. The bank expects that they will lead to an outcome similar to those of peer banks which have settled at materially lower amounts.”

Deutsche shares fell as much as six percent to €10.67 in early Monday trading, the worst performance since 1992.

The bank has lost over 52 percent of its value since January and over 56 percent in the last twelve months. Earnings per share fell as much as €6.

The collapse has been prompted by a report in the German magazine Focus that said Chancellor Angela Merkel has ruled out any state assistance for the bank next year.

Merkel also declined to provide help to Deutsche Bank in its legal battle with the DoJ.

The Frankfurt-based lender may be fined up to $14 billion over its mortgage-backed securities business before the 2008 global crisis, the magazine reported.

The article said Merkel made her views clear in talks with Deutsche CEO John Cryan.

Is Germany maybe considering a bail-in instead of a bail out?

Is this why Germans have been advised to stockpile food and cash in case of a disaster hitting the country?

A bail-in is rescuing a financial institution on the brink of failure by making its creditors and depositors take a loss on their holdings.

A bail-in is the opposite of a bail-out, which involves the rescue of a financial institution by external parties, typically governments using taxpayers money.

Typically, bail-outs have been far more common than bail-ins, but in recent years after massive bail-outs some governments now require the investors and depositors in the bank to take a loss before taxpayers.

Are German citizens about to fall victim to their money being stolen by the government to bail out Deutsche Bank? This sort of thing has happened in the past.

Remember when the Bank of Cyprus took almost 40% of depositors cash to keep the bank afloat and there was nothing they could do about it?

Assets were frozen and ATM machines were not refilled.

We’ve witnessed this before.

It also occurred in both Greece and Venezuela, and it’s highly probable that history will repeat itself.

Will Germany become the next falling domino in the collapse of the Western world?

The lesson that we can take from this is that being prepared far in advance of a collapse is the wisest course of action.

If you stock up on emergency food, water and other vital supplies before the crowd, you’ll do so at better prices with better options.

Last summer, the US government issued 2 warnings to the American people to get prepared, but very few people took it seriously.

Maybe it’s time to take another hard look at those warnings, and take action to be ready and be prepared. Don’t wait until it is too late.