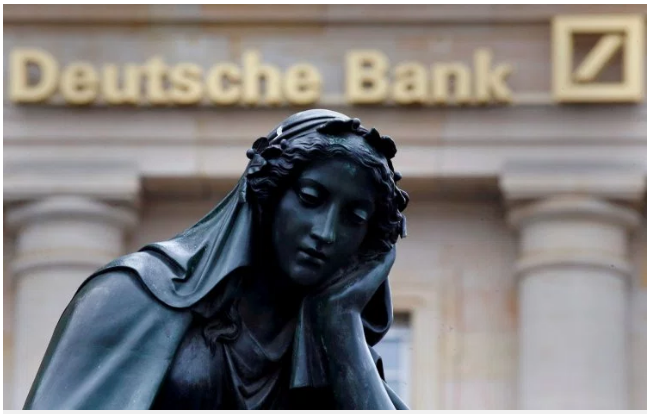 There are fears the bank could buckle (Picture: Reuters)

The German Finance Ministry has quashed rumours that the government is preparing a rescue plan for Deutsche Bank amid fears that the lender could buckle under pending litigation costs.

Speaking to reporters in Berlin on Wednesday, Finance Ministry spokesman Martin Jaeger denied claims made by German weekly newspaper Die Zeit that the government was readying state support for the lender.

‘The German government is preparing no rescue plan for Deutsche Bank and there is no reason for such speculation,’ Mr Jaeger said.

Deutsche Bank did not provide a statement, but chief executive John Cryan told Bild that government support was ‘out of the question’.

‘At no point did I ask the Chancellor for support. Neither did I suggest anything like that,’ he said.

Deutsche Bank’s share price has fluctuated amid the flurry of reports but rose more than 2.6 per cent to 10.82 euro per share (£9.31) on Wednesday, after a two-day sell-off which sent Deutsche Bank shares to record lows.

The sell-off was partly sparked by a report in Focus magazine citing sources, which suggested Chancellor Angela Merkel would not provide any state aid to the bank if it fell into financial trouble.

Some fear a pending settlement with US authorities threatens to deplete the bank’s finances.

The US Department of Justice (DoJ) has tabled a 14 billion US dollar (£10.5 billion) settlement deal following a probe into the German lender’s sale of mortgage-backed securities during the financial crisis.

But Neil Wilson, a markets analyst at ETX Capital, said: ‘It’s not a Lehmans moment in the offing.

‘Deutsche’s problem is not capitalisation – it’s just that its costs have soared (mainly through litigation and fines) and it’s not that profitable any more.That is a much longer-term question about its future than whether it’s in need of a bailout to boost some arbitrary capital requirement.’