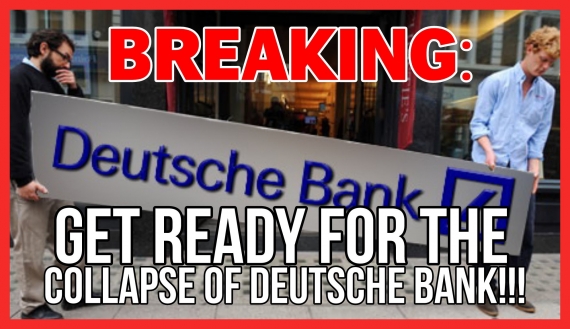 German Bank insiders are confirming to SuperStation95 that Germany’s largest, Bank, Deutsche Bank” will “collapse” tomorrow, Friday, September 30, 2016.  The German government has no plans to bail out the bank and its demise could wipe out Banks in the US and other countries worldwide!

According to the insider:

System downfall tomorrow. A collapse of this bank is unavoidable now, and it wipes out everything immediately.
Wolfgang Gerke, President of the Bavarian Finance Centre, the German bank sees in a serious imbalance.

“This is absolutely not about Peanuts. We experience real shockwaves. The Bank is in real trouble, “Gerke said the Thursday edition of the” Passauer Neue Presse “.

This is as good as a death sentence. It is insider info (presumably from the DB itself), after the financial collapse is to take place on 30 September.

MORE:  A “run” is taking place against Deutsche Bank in Germany as citizens rush to take out money . . .  but they are being systematically delayed.  At least on Depositor ordered 2,000 Euros transferred out yesterday via wire transfer.  At close of business, Deutsche Bank had still NOT sent the money.  When challenged, the bank claimed they needed to verify all the information.  The Depositor now says he feels they no longer have liquidity and cannot pay depositors.

Germans are being quietly told that ALL BANKS in Germany will close on October 1, ALL ATMS, Credit and Debit Cards are likely to be “unavailable” for unknown duration! !  !

European Central Bank Chairman  Draghi refused to talk about Deutsche Bank today, saying It is not his fault the bank appears to be in trouble.

There is panic in DB now. A lot of People withdraw money, close accounts. One guy says he transferred 25’000 Euro and the bank called him back if the amount and transaction is correct and true! Still has not sent the money!

This is a developing story, please check back.

Stock markets worldwide have now tuned-in to this situation and they are falling fast . . . .