‘You’ve never done a proper job in your lives!’ Farage booed as he mocks EU parliament 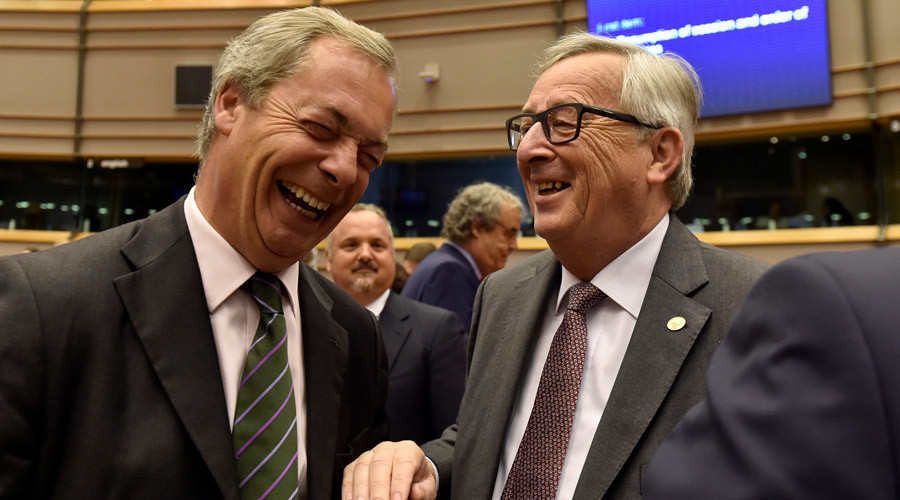 European Commission President Jean-Claude Juncker welcomes Nigel Farage, the leader of the United Kingdom Independence Party, prior to a plenary session at the European Parliament on the outcome of the “Brexit” in Brussels, Belgium, June 28, 2016. © Eric Vidal / Reuters

‘You’ve never done a proper job in your lives!’ Farage booed as he mocks EU parliament

Emotions ran high during an emergency session of the European Parliament on Brexit, with bitter exchanges between MEPs culminating in a call for Britain to trigger Article 50 of the Lisbon Treaty and begin exit negotiations immediately.

The extraordinary session of parliament saw MEPs boo UKIP leader Nigel Farage – one of the main figures in the ‘Leave’ campaign – and turn their backs on him after he said none of them had ever done “a proper job” in their lives.

At the end of the debate, MEPs voted in favor of a motion urging Britain to begin formal exit negotiations immediately by triggering Article 50.

Juncker opened the debate by telling MEPs he was sad about Britain’s decision to vote for Brexit, but that the EU must respect British democracy.

Juncker said Farage “lied about the budgetary aspects” of the UK’s membership of the EU, before suggesting Britain may not have voted for Brexit if it knew the true figures.

The Vote Leave campaign controversially claimed Britain sends £350 million (about US$460 million) a week to the EU, a figure which has been widely discredited because it does not take into account Britain’s rebate.

A truer figure is £136 million a week, after taking into account the rebate and EU spending on the UK.

Farage also backtracked on a promise to see this £350 million invested in the National Health Service (NHS) – rather than the EU – within hours of the referendum result being announced last Friday.

“You told us a few days ago that you made a mistake on the budgetary aspects of what was at stake in the relationship between the UK and the EU,” Juncker told the UKIP head.

“If you’d said that before the vote, then I wouldn’t need to congratulate you [on winning the referendum]. But you lied, you didn’t tell the truth. You fabricated reality.”

Juncker then touched a personal note with his old adversary.

“I enjoy debating with you, sparring with you, Mr Farage. I think we share a similar sense of humor. You used to have a sense of humor, I still do I think. But I find it regrettable that this will be the last occasion we will be able to debate, because you won’t be coming back.”

Farage began his address to the parliament by accusing the EU of being in denial over its failed project.

He ended by predicting the UK “will not be the last member state to leave the European Union.”

Belgian MEP Guy Verhofstadt attacked Farage over his claim to be a defender of workers’ rights.

The leader of the Alliance of Liberals and Democrats for Europe added: “But finally we are going to get rid of the biggest waste in the European Union which we have paid for 17 years, your salary. Thank you.”

Angus Robertson threw a warning that taking Scotland out of the EU would be "undemocratic"https://t.co/2FSmz9MYnM

“The people of Scotland, along with the people of Northern Ireland, London and lots of people, voted to remain within our family of nations,” he said.

“Please remember this. Scotland did let you down. Please, I beg you. Do not let Scotland down now.”

Some members of parliament were enthusiastic about Britain’s vote to leave the EU.

French far-right leader Marine Le Pen hailed Brexit and called on MEPs to “put away those sulky faces, put away those angry looks and rejoice in the free and great emancipation” of the British people.

Le Pen added she is “committed to pursuing the path of liberty” for France.

Hollande rejects calls for #Frexit referendum, Le Pen left with 'feeling of coming for nothing' https://t.co/hp1jikzXY1

“You in the EU, you have supported [the Irish] peace process and I ask you to continue to do that.

“Sinn Fein, we worked for a strong Remain vote, on the basis of another Europe. A more social Europe, a more democratic Europe.

“The EU must change if it is to survive,” she added.