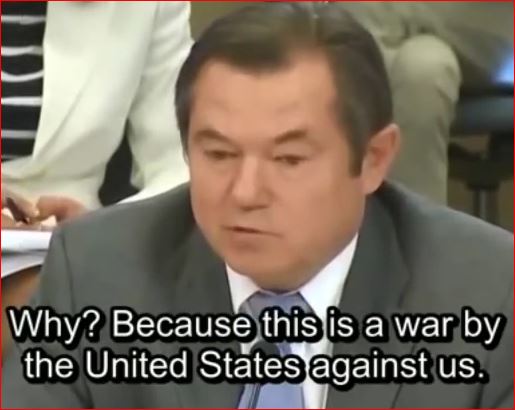 History may eventually decide the ‘New World Order’ started on September 28, when Russian President Vladimir Putin and US President Barack Obama had a 90-minute face off at the UN in New York.

Irrespective of spin – “productive” according to the White House, “tense” according to a source close to the Kremlin – facts on the ground accumulated almost immediately.

Putin did press Obama for the US to join Russia in a real grand coalition bent on smashing ISIS/ISIL/Daesh. The Obama administration, once again, relented. I detailed here what happened next: an earth-shattering game-changer in the ‘New Great Game’ in Eurasia, straight out of the Caspian Sea, that caught the acronym fest of US intelligence – not to mention the Pentagon – completely off-guard.

So this was Putin’s first message to Washington, and the Pentagon/NATO combo in particular; your fancy ideas of stationing tactical nuclear weapons or expanding missile defense to Eastern Europe, or even Asia-Pacific, are just a mirage. Our cruise missiles are capable of wreaking real effective havoc; and soon, as this piece argues, there will be more hypersonic, high-precision long-range missiles added to the mix.

Old habits don’t die hard – they remain in a coma forever. The Pentagon’s response to the facts launched from the Caspian Sea was to conduct an airdrop of light weapons to “a select group of vetted leaders and their units,” as in those famously non-existent Syrian “moderate rebels.” The weapons will inevitably be captured by assorted Salafi-jihadi goon outfits in no time.

Then the British government was forced to deny a Murdoch-controlled Sunday Times“report” that British Tornadoes in Syria are now armed with air-to-air missiles to counter potential Russian aerial “attacks.”

And to top it off, the proverbial “military experts” infesting US corporate media started spinning that we are only 30 seconds from World War III.

A still apoplectic Pentagon will take time to absorb the new military facts on the Syrian ground – and skies. That will add to the utter desperation displayed by the ‘Masters of the Universe’ in the Washington/Wall Street axis – itching to break the China-Russia strategic partnership by all means necessary. Quite a feat when the Pentagon is still fighting World War II, with its weapons, ships and monster aircraft carriers displayed as sitting ducks against Russia’s new batch of missiles.

But then there’s also Putin’s second – silent – message to Washington, which didn’t even have to be delivered in person to Obama. US intel though may have a hint about it, as they closely follow Russian media.

There are at least three absolutely key points in Glazyev’s plan. We may summarize them like this:

So what Glazyev proposes, essentially, is that Moscow must gain total control of its Central Bank, preventing speculators to move their credit around for non-productive purposes; Moscow should also establish currency controls; and must create a central organization of technological research to replace the loss of Western technology, imitating the US methodology of rolling out from its centralized military research those technologies that can be commercialized for the consumer market.

The fact is Russia has lost access to Western credit and cannot roll over its debt with the creditors. So Russia will have to pay the principle and the interest as it comes due. That is a trillion dollars plus interest. Russia also cannot import anything from the West without paying double for it.  So arguably the country may be now in the very position it will be if Moscow opts for default. Thus, Russia would have nothing to lose by a default – as the damage is already done.

A shock to the system

Essentially, once again, a Russian default on a $1 trillion-plus debt to private Western parties remains a possible scenario discussed at the highest level – assuming Washington will persist in its anti-Russia demonization campaign.

Needless to add, such a default, if it ever happened, would collapse the entire Western financial system.

One should never forget the Big Picture; the Syria/Ukraine/sanctions saga runs in parallel to Russia-China and closer BRICS integration shifting the balance of geopolitical power. For the‘Masters of the Universe’, this is beyond anathema. Enter, for instance, the use of cash settlement through their Wall Street proxies to raise the A shares of China to hysterical highs and then try to crash their entire stock market by a reverse cash settlement rig as in 1987.

China is moving toward their own SWIFT payment system, not to mention a whole new Chinese-led set of international institutions independent of US control. Russia, for its part, recently passed a bill that would allow the seizing of foreign assets if Russian assets in the West are seized. As Glazyev pointed out, investment in Russia by the West are more or less equivalent to investments of Russia in the West.

The ‘Masters of the Universe’ may keep insisting on using financial weapons of mass destruction. Russia, silently and with a few key facts in the Caspian Sea, is letting them know it’s ready for whatever scenario they can come up with.

A less apocalyptic ending may be healthy. So here’s a popular joke in Moscow nowadays, as told by William Engdahl…

Putin is back in the Kremlin after his meeting with Obama in New York. He tells an aide he invited Obama for a game of chess. And then he tells it how it works: “It’s like playing with a pigeon. First it knocks over all the pieces, then it shits on the board and finally struts around like it won.”