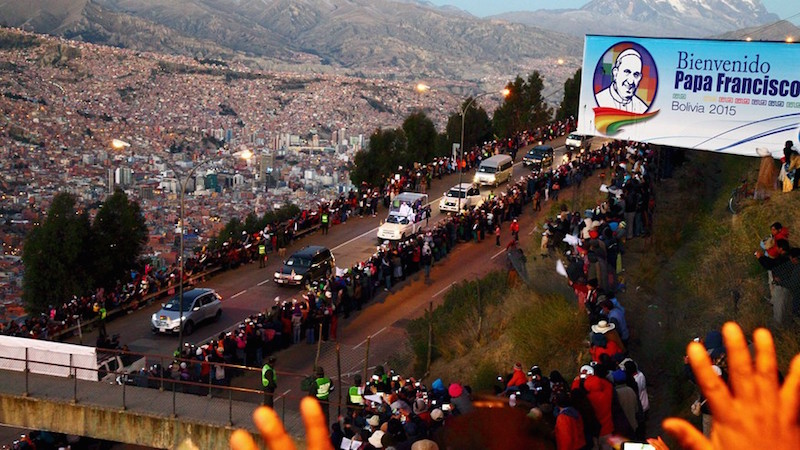 Pope Francis rides on a popemobile on a road leading from El Alto to La Paz, on the outskirts of La Paz, Bolivia.

Pope Francis ignites a revolt that will overthrow American capitalism

Yes folks, Pope Francis is a revolutionary destined to end up in the history books right up there with Lenin and Marx, Mao and Castro. He is obviously inciting revolution, wants civil disobedience and political insurrection, he is egging the poor into rebellion against a vastly outnumbered rich.

In fact, Francis has become one of the world’s great revolutionary leaders. He not only is inciting an uprising of the masses against wealthy capitalist billionaires, he’s out in front of the emerging global revolution, encouraging the masses, shouting battle cries, a leader in the tradition of Washington.

So the media should stop mistaking Francis’s congenial nature, his perpetual smile, dismissing his true intentions. His is an aggressive call to arms, a call for a global revolution attacking today’s out-of-control, consumer-driven “mutant capitalism,” a call to replace capitalism with a new economic socialism giving the poor “sacred rights” on par with the superrich.
Time’s Hale went on to outline the four “foundations” of the pope’s coming “revolution.” Hale covered the pope’s tour in South America in, “Pope Francis Isn’t Holding Back — And U.S. Politicians Should Watch Out.” In Bolivia Francis warned that global capitalism is a failure and needs a “structural change” because it runs “counter to the plan of Jesus.” Hale then added that “leaders of both parties might regret their invitation to the 78-year-old Jesuit pontiff” to address a historic joint session of Congress in two months. Five reasons make the warning quite obvious:

2. Humans, not capitalist profits, must be at the center of global economics
Pope Francis message is unambiguous: “Unbridled capitalism” has become a “subtle dictatorship,” is now the very “dung of the devil.” Ouch, that must hurt even the stone-cold Koch ego. Francis says that capitalism’s greedy “unfettered pursuit of money” is destroying the “common good,” setting a stage for revolutions. The pope urged the masses to “say no to an economy of exclusion and inequality, where money rules,” because capitalists will “destroy Mother Earth” in order to enrich the superrich elite. Yet another revolutionary call to battle.

3. Billions worldwide, cannot wait much longer for action
Earlier Pope Francis’ encyclical warned that “doomsday predictions” about climate “can no longer be met with irony, disdain” or dismissed without action. Now, Francis is aggressively pushing world leaders and humans everywhere to fight against all economic injustices against individuals. The clock’s ticking loudly, time is “running out: we are not yet tearing one another apart, but we are tearing apart our common home” here on Earth. Pope Francis also encourages people to start demanding, “We want change!” Remember the 1976 movie “Network”: where an anchorman gets listeners shouting, “I’m mad as hell and I’m not going to take this anymore!”

4. Revolutions begin with angry citizens, not politicians or philanthropists
Time’s Hale says the pope’s call for “structural change won’t be the result from any one political decision.” The pope understands that politicians rarely lead. Real change is triggered from below, by angry mobs, they get “caught up in the storms of people’s lives,” fired up, rebel, motivated to act, then revolutions ignite and move fast like a wildfire on jet fuel.

5. Warning: Socialism is now a moral obligation, a commandment to obey
Admit it, Pope Francis is clearly inciting people to rebel with his passionate, provocative and inspirational message, which triggers memories of Marx, yet is directly from the Gospels of Jesus: “Working for a just distribution of the fruits of the earth and human labor is not mere philanthropy,” not just a handout from capitalist billionaires.

Instead Pope Francis shifts our focus: The socialism is now “a moral obligation. And for Christians, the responsibility is even greater: it is a commandment. It is about giving to the poor and to peoples what is theirs as a sacred right.” And if we fail to do give it freely, do not be surprised when revolutions explode across Planet Earth.