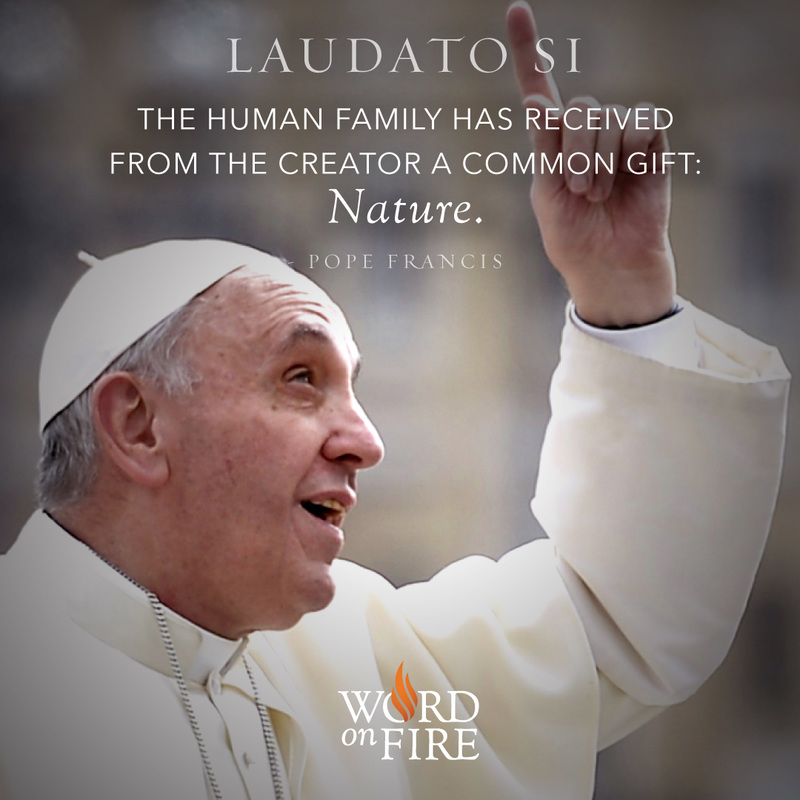 If the papal encyclical is for real, the Pope needs to DO much more

“Yet it must also be recognized that nuclear energy, biotechnology, information technology; knowledge of our DNA, and many other abilities, which we have acquired, have…given those with the knowledge, and especially the economic resources to use them, an impressive dominance over the whole of humanity and the entire world….In whose hands does all this power lie, or will it eventually end up? It is risky for a small part of humanity to have it.” (p.77)
~ Pope Francis

A Papal Encyclical is a letter concerning Catholic doctrine which is circulated by the Pope. This week, Pope Francis published a new Encyclical: Laudato Si’ of the Holy Father Francis – Care for Our Common Home.

The 180+ page document sounds the alarm regarding the global degradation of living things: people, animals and our environment.

If this document had been authored by a professor of theology, there would be much room for common ground. However, it has been written by the leader of an institution which has been the single most powerful in the Western world for the last 500 years – a period during which thecentral banking-warfare model has been busy harvesting our common whole.

There is a profound disassociation from the nuts-and-bolts of what the Catholic Church (and its networks and investment syndicates) have been doing and the sources of their wealth. This Encyclical is, if you will, a concept piece independent of the financial and political realities of the Vatican, the Catholic Church and its allies.

Assuming that Pope Francis first and foremost addressed the Encyclical to bishops, patriarchs, primates, archbishops as well as to the general population, I would like to propose several steps which the Pope, the Vatican and the leadership of the Catholic Church (collectively, the “Church”) might take to integrate some of the best ideas in this document into the power lines controlled and influenced by the Church.

The world is struggling with propaganda, disinformation, and significant suppression of the truth.  The new Pope’s efforts to provide digital access to works in the Vatican Library on a selective basis are a good start. In the meantime, there is a great deal of knowledge which the Church, its libraries and networks can share:

Slavery contributes significantly to the degradation of people throughout our planet.

The primary source of environmental damage does not result from market economics – quite the opposite. It results from the lethal combination of organized crime operating powerful and invisible weaponry coupled with invasive digital systems and sophisticated financial tools on scale. In short, those with the ability to kill, to destroy and to steal with impunity combine such force with fiat currencies, unsustainable debt, resource extraction, financial fraud, war and genocide in order to centralize wealth and power in a manner which shrinks total wealth.

Lawlessness on a global scale must be dealt with before it destroys our planet.

No less than The Economist has rightly pointed out that we are chocking on debt, in part because we provide enormous tax subsidies which encourage debt (see The Great Distortion). Debt throws people out of alignment with one another and with the environment around them. Ditto fiat currency which is used in a manner to debase global populations and economies.

We must shift to an equity-based financial system which facilitates the free flow of equity unencumbered by the intervention and control of organized crime. An equity-based system – which includes the financing of small businesses, small farms and local economies with equity – will permit us to evolve a financial system in which we can generate wealth from healing our environment and reducing consumption.

Before we dismiss capitalism, we should try it.

Organized crime is not capitalism. It is the application of force to control and to get one’s way. Market economics can solve many of the problems before us – but we have to unleash markets to work rather than prevent them from operating and then blaming the subsequent “mess” on them.

The Church and its affiliates and members manage trillions in real estate and financial assets. As one of the most significant capitalist organizations/investment networks on our planet, it can institute policies to ensure that it does not invest in companies or governments which behave in the manner described in the latest Encyclical and that its real estate is not used to support such activities.

During Vatican II, the Church forced the sale of significant real estate holdings which were serving communities. The proceeds from these sales were reinvested in corporate securities. The Church can ensure that the Orders for whom these funds are managed have access to full transparency about these investments and are permitted to institute policies which ensure that these investments are managed in accordance with the goals of this Encyclical.

Published global military expenditures were $1.7 trillion in 2013. Add secret black budget expenditures and the total was likely much more. These funds – combined with savings from destructive behavior such as gambling, narcotics and alcohol – could be shifted into investment in healing our environment, our education systems, our health care systems and revitalizing global infrastructure.

Both the Church and our planet are dynamic living systems. Moving to a healthy global culture and aligning our financial ecosystems with our environmental ecosystems is a journey.

9. Wise as a Serpent

There is often a risk that any important policy will be misunderstood or misused by those who are centralizing control and power. The G-7 nations have experienced a financial coup d’etat.  A great deal of money and assets have been shifted out of sovereign governments into private hands – either illegally or under the guise of trillions in bailouts and quantitative easing – while liabilities have been shifted back into governments.

Now that these transfers are complete, it would be convenient to blame the victims and to abrogate their pensions and other savings plans and promises. It would be unfortunate if this Encyclical were used to justify the value of doing so in the name of “reducing consumerism” or to politically outmaneuver the victims by accusing them of being “selfish.”

Economies function on trust and such trust must come from honoring our agreements. As Pope Francis understands, it is easy to blame the victim and to take from the powerless.

Utah Phillips once said, “The Planet is not dying, it is being killed. And the people doing the killing have names and addresses.”

We commend the Pope for calling out for a cessation of the debasement of all living things. Let us hope that his latest Encyclical starts ringing doorbells – beginning with the opportunity to do so in the Church and in the Church’s asset and investment portfolios.