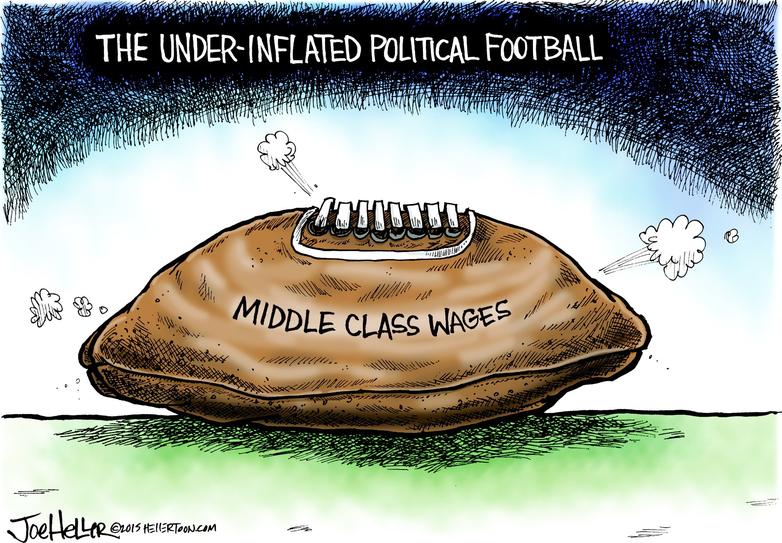 As Belichick and Brady are prosecuted by the Mainstream Media,
Obama and Biden get a pass from the White House press corps Who really set off the firestorm around the ‘deflated footballs’ … as in who really did it and who first reported it?

More importantly, how does anyone know if they really were deflated in the first place. In other words might this whole ‘scandal’ be as fake as the “gate” attached to the “deflate”.

Because the Mainstream Media (MSM) no longer has any credibility about anything, whatever they publish is justifiably subject to total disbelief and ought to be thoroughly investigated. In the case of DEFLATEGATE, a ‘scandal’ name which the MSM itself made up, it is easy to perceive their self-made opportunity to capitalize on this year’s version of professional football’s Watergate.  Next up, somebody will be asking “What did they know?”, and “When did they know it?”

The whole episode is much ado about nothing.  Which begs the question: “Why?”  and more significantly “Why Now?”  And, of course, “Cui bono?” as always.

In virtually every case of such a media-driven ‘scandal’ there are much more serious things which are either being quickly covered up or in desperate need of a political red herring.  In this way the ‘scandal’ of the week serves as both distraction and diversion.  The MSM is systematically used — both wittingly and unwittingly — to play the role of “Master Distracter”.  The MSM is an expert at creating diversions whenever they are necessary to abruptly change the national discussion.  Particularly when there are very important issues under consideration (such as recklessly starting a war with Russia, issuing illegal executive orders which legislate new immigration law, irresponsible raising of the debt ceiling), which will determine the very destiny of the nation, do these fake ‘gates emerge out of no where.

While the nation’s press corp was grilling Tom Brady and Bill Belichick about very single detail and nuance of how the footballs lost some pressure, Obama & Company are imposing another round of sanctions on Russia.  The USA has already coerced all the usual suspects in ganging up on Russia in what amounts to a full scale economic war.  History clearly demonstrates that such damaging economic conflict almost always leads to armed combat, as in WWI and WWII-style.

The Obama Administration has operated in this subversive fashion since day one.  A close examination of the public record clearly reveals a one-to-one correlation between their regular misdeeds and transgressions of law and completely manufactured events which pop up out of nowhere.  This website has chronicled a number of these red herring events which have routinely been used to distract and confuse the American people at critical moments.

That’s not to say that there are not many agendas, on various levels, operating at the same time.  Some have even mentioned that the NFL, by their odd conduct throughout this saga, may have encouraged the whole affair as a way of increasing viewership.  A hoax like Deflategate can go a long way in stimulating interest where there was none before.  Especially since neither the Seattle Seahawks nor the Boston Patriots seem to enjoy much of a fan base outside of their respective locales, does this theory make a lot of sense.

Undoubtedly, this faked news story has monopolized an inordinate amount of the Patriot’s time and energy as admitted by Coach Belichick.  Therefore, a furtive plot by the opposition to sabotage the Super Bowl final is another explanation gaining traction.  So is “a scheme” to affect the odds and the outcome of the Super Bowl game in favor of the oddsmakers.  Likewise, those who have the most to gain by betting large sums on this premier gambling event of the year have been proffered as possible perpetrators.  Given the exorbitant amount of money involved, this scheme is also quite plausible.

Truly the list conspiracies goes on and on, but the one interesting likelihood is that each of them feeds off the other.  Certainly the MSM gains no matter who perpetrated the evil deed, if in fact there even was a perpetrator (and we sincerely doubt there was one).  Ergo, in any event the media benefits regardless of who or why this game has been run on the American public.  The MSM simply doesn’t care about arriving at the truth of the matter any time soon.  The more controversy and conflict around any so-called ‘scandalous’ event the more hits and website traffic, the more Facebook shares and Twitter tweets, the more viewers and listeners.

Of course, the government always gains, too, from such ridiculous time-consuming endeavors which preoccupy the electorate.  Time taken away from necessary government scrutiny is always preferred by those in power.  The current administration has an extraordinary list of its own scandals and wrongdoings which have plagued it since Obama’s first inauguration.  The following ever-growing list of real “Scandalgates” have occurred in the wake of false promises — in two campaign seasons — to be the most transparent administration in modern American history.

With a list of improprieties like the preceding one, is it any wonder that the Obama Administration would do anything possible to shift the media spotlight elsewhere?  In light of this presentation it’s truly a wonder that there’s not a fake ‘Scandalgate’ every other day.  Actually, perhaps there are and we just can’t keep track of them all!

The amount of time and scrutiny that the Boston patriots have received during their prosecution by the media is unprecedented.  An unproven professional football violation has been attributed by various parties of stature in the complete absence of any proof.  Such a conflagration of false accusations and piling on by the MSM is indicative of something looming much larger in the background.

Particularly in light of the alarming lack of scrutiny received by the Obama Administration for clear cut war crimes, full-blown constitutional crises, violations of federal law and state statutes, as well as waging unprovoked wars, Deflategate is totally without merit.  The MSM’s preoccupation with a non-story is indefensible and reflects a hidden agenda that the public may never come to know about.

For these and other reasons it falls upon the shoulders of the alternative news media to ferret out the truth of red herrings like Deflategate.   The American people have very little understanding of what has been conducted in their name and with their tax dollars.  Perhaps the time has now come to reverse that worrisome trend.

Obama Administration: Okay To Make A Movie About The Assassination Of A Sitting President