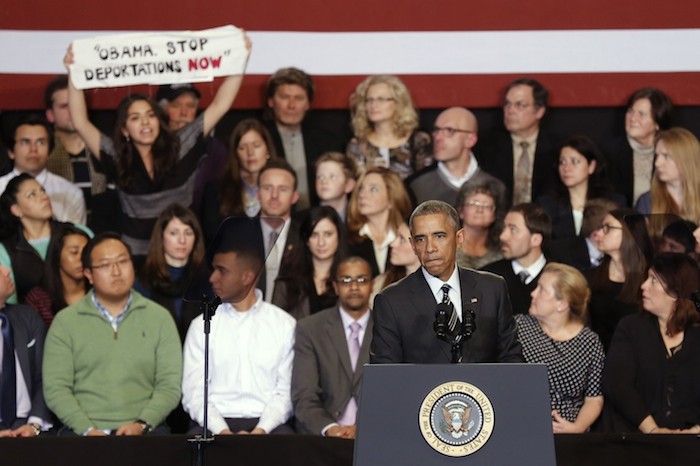 U.S. President Barack Obama reacts to a protester as he speaks at the Copernicus Community Center on November 25, 2014 in Chicago, Illinois. Obama discussed the executive actions he is taking to address the country’s immigration system. (John Gress/Getty Images)

THE WHITE House has defended President Obama’s unilateral decision to legalize the presence of nearly 4 million undocumented immigrants as consistent, even in scope, with the executive actions of previous presidents. In fact, it is increasingly clear that the sweeping magnitude of Mr. Obama’s order is unprecedented.

Central to the administration’s argument is its contention that the 4 million covered by the president’s order — some 36 percent of the estimated undocumented population of 11 million — is in line with the percentage covered by a comparable action by President George H.W. Bush in 1990. At that time, there were about 3.5 million illegal immigrants in the country; Mr. Obama, administration officials and their allies have said that about 1.5 million of them — the spouses and children of previously amnestied immigrants — benefited from Mr. Bush’s move.

In addition to the White House press secretary, Josh Earnest, and Mr. Obama himself, the Justice Department’s Office of Legal Counsel citedthe Bush executive action as precedent, using the figure of 1.5 million immigrants.

However, as The Post’s Glenn Kessler has scrupulously reported , there is every reason to believe that the estimate is wildly exaggerated and based mainly on what appears to have been a misunderstanding at the time.

When the measure was announced, Bush administration officials estimated the number who would be affected at around 100,000. While that was followed by some fuzziness and upward revisions, the actual number affected by the 1990 order was clearly a fraction — perhaps a couple of hundred thousand people, at most — of the 1.5 million that Obama administration officials have cited.

Even the apparent original source of the 1.5 million figure — Gene McNary, who led the Immigration and Naturalization Service at the time — told Mr. Kessler he believes the number is false and was based on a misunderstanding from testimony he gave to Congress. And no underlying data or methodology to justify the 1.5 million figure has been uncovered.

This is not a game of gotcha; facts matter — even in Washington — and so do the numbers. Under close scrutiny it is plain that the White House’s numbers are indefensible. It is similarly plain that the scale of Mr. Obama’s move goes far beyond anything his predecessors attempted.

A responsible Congress would have legislated a fix to the nation’s broken immigration system. It is outrageous that Republican leaders in the House refused to allow a vote on a bill that passed the Senate last year. That bill, backed by Democrats and some moderate Republicans, stood a good chance of passing the House and becoming law. Even now, Republicans’ refusal to enact a bill — and their use of Mr. Obama’s order as further pretext for obstinacy and paralysis — is an abdication of leadership and duty.

Republicans’ failure to address immigration also does not justify Mr. Obama’s massive unilateral act. Unlike Mr. Bush in 1990, whose much more modest order was in step with legislation recently and subsequently enacted by Congress, Mr. Obama’s move flies in the face of congressional intent — no matter how indefensible that intent looks.