Putin Slams The USA, Puts The Western Powers On Notice 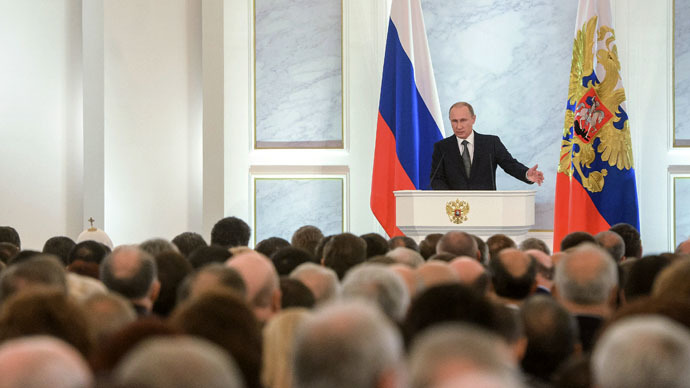 Putin: Talking to Russia from position of strength is meaningless

Russia is open to the rest of the world and ready for developing equal partnership with other countries, said Vladimir Putin He dismissed treatment Russia through strength and sanctions as ineffective and warned against scheming.

“Talking to Russia from a position of strength is meaningless,” said Putin in his annual state of the nation address to the Federal Assembly, stressing that the ‘deterrence policy’ towards Russia is nothing new.

“The deterrence policy was not invented yesterday, it has been always conducted towards our country, for decades, if not centuries,” Putin noted.

“Every time somebody considers Russia is becoming too powerful and independent, such instruments are turned on immediately,” said Putin.

The US has always been, either directly or behind the scenes, affecting relations between Russia and its neighbors, the president said.

“I’ve mentioned our American friends for a good reason,” Putin said. “Because sometimes you don’t even know to whom it is better to talk to: the governments of certain countries or directly with their American patrons.”

ABM is a threat to US itself

Further deployment of America’s global anti-ballistic missile defense poses a threat to the US and those European countries that agreed to host it, because it builds up a dangerous illusion of invincibility, Putin said.

“This [ABM] constitutes a threat not only to the security of Russia, but to the whole world, in view of the possible destabilization of the strategic balance of powers. I believe this is dangerous for the US itself, as it creates a dangerous illusion of invulnerability and reinforces the tendency of unilateral, often ill-considered decisions and additional risks,” Putin said. The European Phased Adaptive Approach, a centerpiece of the US missile defense shield in Europe, implies deployment of Arleigh Burke-class guided-missile destroyers, all of which are fitted with the Aegis weapon and radar system, interceptor batteries in Poland and Romania, radar in Turkey, and a command center at Ramstein, Germany, a US Air Force base.

Russia considers the system to be a major threat to its own security and has threatened to increase its own arsenals and missile shield piercing capabilities in response.

Russia says ‘no’ to arms race

Russia will not get involved in an expensive arms race, the president said, yet the country’s defensive capacity in the new conditions will be securely guaranteed.

“There’s no doubt about that – consider it done. Russia has both the capacity and creative decisions to do so,” Putin said.

Russia has fought off attempts to initiate its disintegration, similar to the scenario applied to the former Yugoslavia, Putin said.

“They would make us follow the Yugoslavian scenario, with its disintegration and dismemberment of territory, with great relish and with all the resultant tragic consequences for the peoples of Russia. No way. We prevented it,” he said. Putin also recalled the fate of Adolf Hitler, who also planned to destroy Russia, and the Nazis’ misanthropic ideas.

“Everyone should remember how that ended,” Putin said.

Russia cannot afford the liberty of being weak, Putin added.

“The more we retreat and offer excuses, the more impudent become our opponents, acting in the most cynical and aggressive manner,” Putin said.

Putin recalled the situation in the 1990s when Russia showed unprecedented openness to international cooperation, but it faced “the support of separatists from abroad: informational, political, financial and from intelligence agencies, was absolutely evident.”

All that was taking place at a time when Russia “considered its recent enemies as close friends and nearly allies,” Putin said.

Vladimir Putin spelt out Russia’s special bond with Ukraine as being like a “brother nation” and despite the recent tension between the two countries, this relationship will not change.

“It is well known that Russia has not only supported Ukraine and other ‘brother republics’ of the former USSR in their seeking sovereignty, but also has contributed significantly to this process in early 1990s. Since then, our position has not changed. Each nation has an inalienable right to its own development path,” the Russian president said.

The Russian president stated that Crimea was of huge civilizational and historical relevance for Russia. Putin stated how Crimea was to Russia, what Table Mount is to Jews and Judaism. He commented on how important as a spiritual reference the peninsula has for the Russian people, noting that Prince Vladimir was baptized in Crimea as a Christian, before he would eventually baptize all Rus.

“Exactly on these spiritual grounds our ancestors have perceived themselves as a common nation at the first time and forever,” Putin noted. “This gives us all reasons to say that Crimea is of enormous sacral importance for Russia,” he said with confidence, noting that “We will take this so once and forever.”

Writing the speech himself

The President’s Federal Assembly address on the state of the nation and the country’s major international and internal policies is one of the political highlights in the country. The annual speech is mentioned in the Russian constitution. This year the tradition marked its 20th anniversary – with the first address having been delivered by President Boris Yeltsin in February 1994.

The speech usually takes around an hour – with Putin’s longest address having taken 82 minutes to deliver in 2012, and shortest 47 minutes in 2004. This year Putin spoke for just over an hour, in front of an audience of some 1,100 people at the Kremlin’s Georgievsky hall.

With the current situation in the country – both in regards with economic situation and international relations, the president’s address had been prepared by Putin himself, as well as last year’s speech – a source in president’s administration told RIA Novosti news agency.