ISIS leader: “If there was no American prison in Iraq, there would be no ISIS” 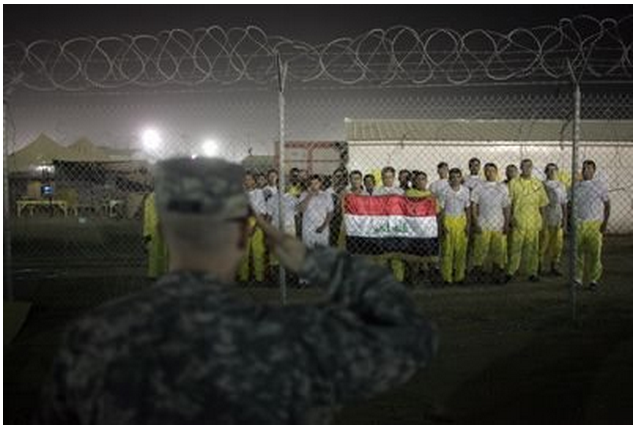 ISIS leader: “If there was no American prison in Iraq, there would be no ISIS”

In an incredible scoop, the Guardian‘s Martin Chulov interviewed a senior leader of ISIS— one who came up through the ranks with the group’s top leader Abu Bakr al-Baghdadi. The singlemost interesting quote from the ISIS leader, whom Chulov refers to as Abu Ahmed, is quite disturbing: he credits the group’s rise, in large part, to American prison camps during the Iraq war, which he says gave him and other jihadist leaders an invaluable forum to meet one another and to plan their later rise.

“HERE, WE WERE NOT ONLY SAFE, BUT WE WERE ONLY A FEW HUNDRED METERS AWAY FROM THE ENTIRE AL-QAEDA LEADERSHIP”

Abu Ahmed was imprisoned in a US-run detention center in southern Iraq called Camp Bucca in 2004. That’s where he met al-Baghdadi, among others who would later form ISIS. According to Ahmed, Baghdadi managed to trick the US Army into thinking he was a peacemaker, all the while building what would become ISIS right under their noses:

“He was respected very much by the US army,” Abu Ahmed said. “If he wanted to visit people in another camp he could, but we couldn’t. And all the while, a new strategy, which he was leading, was rising under their noses, and that was to build the Islamic State. If there was no American prison in Iraq, there would be no IS now. Bucca was a factory. It made us all. It built our ideology.”

When they entered the US-run prison, Baghdadi and many of the others were members of small Sunni militia groups. But the organizing space allowed them to unify under the name al-Qaeda in Iraq (AQI), led at the time by Abu Musab al-Zarqawi.

“We could never have all got together like this in Baghdad, or anywhere else,” Abu Ahmed says, sounding almost grateful to the Americans. “It would have been impossibly dangerous. Here, we were not only safe, but we were only a few hundred meters away from the entire al-Qaeda leadership.”

Later, after Zarqawi was killed, and AQI’s near-total defeat at the hands of a Sunni uprising and the American surge, Baghdadi and his compatriots rebuilt the group under the ISISbanner. Their network organized partially out of US-run detention centers has played a key role in that. The Iraqi government, Chulov reports, estimates that “17 of the 25 most important Islamic State leaders running the war in Iraq and Syria spent time in US prisons between 2004 and 2011.”

In other words: without the Iraq war and American prisons there meant to detain possible terrorists, ISIS as we know it wouldn’t exist.