On May 11 a plane arrived at Kiev’s airport in strict secrecy; it was met by the airport’s military personnel rather than the civilian staff. NATO military uniforms, 500 packages of amphetamines, and containers marked as poisonous substances were unloaded from the plane. By order of the Kiev directorate of the SBU, the fighters, the cargo and the containers of poison were not inspected and left the airport in cars with tinted windows. The cargo was accompanied by CIA agent Richard Michael. Aboard the plane were also fighters from the Right Sector and the Polish private military company ASBS (Analizy Systemowe Bartlomiej Sienkiewicz) Othago, created several years ago by Poland’s current Minister of the Interior, B. Sienkiewicz.

According to available data (5), this Polish PMC lost 6 men during a punitive operation in Eastern Ukraine (the remaining casualties among foreign mercenaries working for the junta came from the American PMC Academi and its subsidiary PMC Greystone Limited, which lost 50 and 14 fighters, respectively, as well as the CIA and the FBI, with 25 casualties, 13 of whom were killed).

The Poles have been participating actively in the formation of death squads in Ukraine since September 2013, when Foreign Minister R. Sikorski invited 86 members of the Right Sector to train at the police training center in Legionowo, 23 km from Warsaw. The fighters, who came on the pretext of a university exchange program, were mostly men of around 40; they received a month-long training course in organizing mass protests, erecting barricades, seizing government buildings, street fighting tactics, shooting techniques, including from sniper rifles, etc. The Polish weekly Nie published a photo from Legionowo showing Ukrainian fascists dressed in Nazi uniforms alongside their Polish instructors in civilian clothing.

While the Polish special services were training the future participants of punitive operations, the Polish Ministry of Foreign Affairs is said to have made this official statement (02-02-2014):

At the same time, Polish Prime Minister Donald Tusk cautioned President Yanukovich against«disproportionate use of force» against the Maidan. Donald Tusk  demands that the Kiev junta deal with the «eastern rebels» harshly, «as with terrorists».

In mid-May Tusk demanded that Hungarian Prime Minister Orban, who considers fascist Ukraine a «challenge to the European Union» refrain from making such statements so as not to divert attention from the fight against the main adversary – Russia. But several weeks earlier (04-24-2014), the Polish prime minister stated that Europe must prepare for the disintegration of Ukraine.

«The problem is that Warsaw’s eastern policy is to a great degree directed by Polish intelligence, which collaborates closely with American and British intelligence agencies», asserts Leszek Sykulski, head of the Czestochowa Institute of Geopolitics.

In early April, CIA director John Brennan visited Kiev. The very next day after his visit, the head of the Kiev regime, Turchynov, announced the beginning of «large-scale antiterrorist operations in connection with events in the Southeast». Not only American, but Polish mercenaries showed up for this operation.

After the head of the CIA, on April 21-22 U.S. Vice President Joseph Biden visited Kiev. Speaking in the Verkhovna Rada, Biden stated that Washington supports the Ukrainian government in the face of «humiliating threats», obviously with Russia in mind. The answer to the question of what the United States needs in eastern Ukraine is simple: The cities which the junta is desperately trying to subjugate are located in the Dniepr-Donets Basin, which has enormous deposits of shale gas. Royal Dutch Shell has already staked a claim on these tracts.

«I would say that the economic interest in this case is what’s driving the coup regime in Kiev to launch military actions against its own citizens, because they stand to make a profit from these contracts signed by the previous government»,asserts American foreign affairs expert Nebojsa Malic.

Robert Hunter Biden, the son of the U.S. vice president, who has become a frequent visitor to Kiev, was recently appointed to the Board of Directors of the largest private gas producer in Ukraine, Burisma Holdings, which is registered in Cyprus and holds licenses for developing the gas fields of the Dniepr-Donetsk Basin. In April, Devon Archer, a family friend of the U.S. Secretary of State who was the college roommate of Kerry’s stepson and a senior advisor during John Kerry’s 2004 presidential election campaign, also received a post in the company.

U.S. top officials and their close relatives have a great personal interest in all the countries invaded by American occupation forces, starting back in the days of the wars against Yugoslavia and Iraq. For example Kerry’s predecessor as Secretary of State, Madeleine Albright, has business in «independent Kosovo», and Biden’s predecessor as vice president, Richard Cheney, and his family, as well as yet another U.S. secretary of state, Condoleeza Rice, latched onto Iraq’s energy resources through Halliburton and Chevron. The same kinds of interests are appearing in those who serve the interests of Americans in Eastern Europe, as well. For example, Ukraine’s ex-Minister of Ecology Mykola Zlochevsky and former president of Poland Aleksander Kwasniewski are on the Board of Directors of Burisma Holdings.

One of the potential shale gas fields for which development rights were given to Burisma Holdings is the Yuzivska shale field. Besides Slavyansk and part of neighboring Kramatorsk, with a population of 160,000 people, the tract given to Shell includes the cities of Krasny Luch and Svyatogorsk in the Donetsk region, as well as Balakeya and Izyum in the neighboring Kharkov region. And the shale gas extraction contract is written such that the Ukrainian government is obligated to forcibly take property away from its lawful owners if Shell states that it plans to drill on those lands. The vicinity of Slavyansk has been selected as the location for the drilling of the first gas wells… 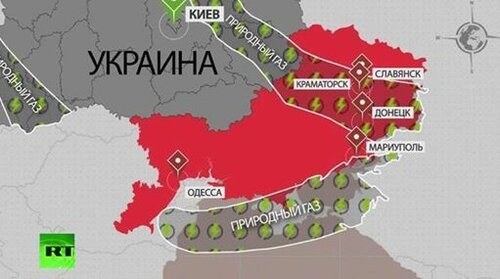 The place where the Ukrainian army is concentrated, supported by the Right Sector, the private punitive battalions of fascist oligarch Igor Kolomoisky and mercenaries from American and Polish PMCs, points directly to one of the main reasons for the punitive operation: that the Kiev regime is serving the business interests of the commanding elite of the U.S. and Poland. It is around Slavyansk and Kramatorsk that the most violent clashes between the punitive forces and the people of the Donets Basin have taken place, while Izyum is the main base for Ukrainian forces participating in the punitive operation.

The following speak of what methods are being used in the punitive operation:

-the attackers’ losses, which include attack and transport helicopters, armored vehicles, 122-mm howitzers, and «Grad» rocket launcher systems, a salvo from which is capable of destroying all life in an area of 14.5 hectares,

-bombardment of cities from mortars, as a result of which more civilians are killed than self-defense fighters,

-the use of helicopters with UN symbols on them for air attacks on Kramatorsk. These helicopters were piloted by Polish mercenaries, as even their Ukrainian colleagues refused to violate international norms of using military equipment bearing United Nations symbols.

All of this can be considered an answer to the question of just what kind of cargo is being hurriedly transported to Ukraine by Polish mercenaries under the supervision of U.S. intelligence, and why the Pole Kwasniewski is on the board of directors of a company for whose activities the way is now being cleared by armed groups of Ukrainian fascists (the «national guard») and American and Polish mercenaries, killing militants and civilians. It seems that the Kiev junta and its Western masters are prepared to resort to any provocations, up to and including using chemical warfare agents on the local population, as happened recently in Syria, and earlier in Iraq, where it was the Poles who specialized in such matters.