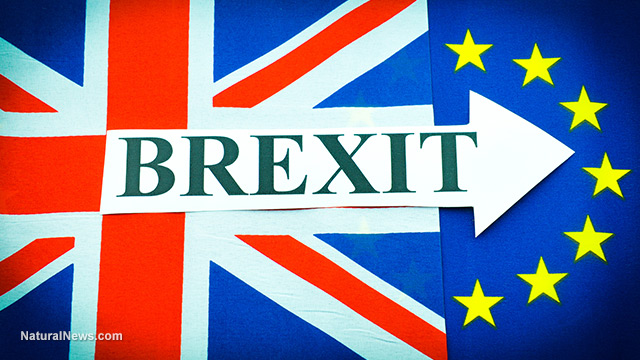 Democracy on the brink!

(NaturalNews) It was my headline story on June 22, the day before the BREXIT vote: BREXIT PREDICTION: Globalists are going to steal the referendum with massive fraud….

Now we see exactly that taking place. As Breitbart.com reports, a “remain” petition that has reached over 3 million signatures is being run by robotic scripts to artificially boost the numbers.

The push is on to try to hike the petition number above 16 million, then cite the petition to nullify the democratic vote on the first referendum and call for a second one (that the globalists can control more carefully this time).

The petition is also attracting impossible numbers of “signatures” from places that don’t even have any real population living there. For example, 2,735 signatures have been submitted from British Antarctic Territory, where the total population is just 250 people, reports Breitbart.com.

At the same time, an announcement has been made by a member of the Scottish Parliament that they may attempt to block BREXIT through a procedural vote. This is nothing less than a full frontal assault on the very pillars of democracy. The idea is to let the people vote as a form of psychological theater, then nullify whatever vote results the elitists don’t like.

As I mentioned in my pre-BREXIT article:

The globalist slave masters of the EU will not voluntarily allow the peasants escape to their control… The very last thing a dictatorial regime wants is to give the people any real chance to alter the future with their votes. Thus, the game being played in the UK and everywhere else around the world is to give the sheeple the ILLUSION of democracy while actually controlling the outcome of every election from the very start.

EU globalists, in other words, despise actual democracy. If the “REMAIN” vote had won, they would have declared, “The people have spoken!” But now that the “LEAVE” vote was victorious, they are trying to hijack the result and condemn the people as being too stupid to know what they were doing.

In totalitarian regimes, the voters are seen as nothing more than useful idiots to be manipulated by government and media propaganda

This is how liberal, totalitarian governments always operate: Voters are simply useful idiots to be manipulated, embraced or denounced as needed to fulfill globalist agendas. No matter of real importance is ever left up to an honest vote.

The only reason votes are still allowed at all is to create the illusion of democracy in societies that have already collapsed into totalitarian police state regimes run by an “untouchable” class of ruling elite (to whom no laws ever apply).

Is it any wonder the people of the world are ready for unbridled revolt? Taking away the vote of the people at the ballot box really is the last straw. After all, the next option remaining is an armed citizens revolt to march on the capitol cities, arrest the criminal bureaucrats, throw them out of office and install new representational leaders who listen to the People. (This is the entire point behind the Second Amendment, by the way. It is the last remaining option when government becomes a murderous, criminal regime… and it ALWAYS does sooner or later, as history has repeatedly shown.)

If BREXIT is nullified, I predict the unleashing of widespread chaos across the United Kingdom as the People realize their democracy has just been hijacked by criminal bureaucrats and globalists. If this happens, tens of millions of UK citizens will suddenly wake up and realize how foolish it was to give up their firearms in exchange for promises of “security” by the same government regime that has now become a direct enemy of democracy.

Will the UK abandon democracy and admit the country is a lawless, totalitarian regime?

If the BREXIT vote is nullified, the UK is an admitted totalitarian regime where democracy no longer exists. So now the EU and UK globalists have an interesting choice. They can either accept the vote and maintain the illusion that the UK is a democracy, or they can nullify the vote and sweep away all pretense of running a democratic society.

The laws of society, you see, are nothing more than mental constructs in the minds of the citizens… quiet agreements to accept the same structure of laws that other people agree to, all in the interests of creating a theoretically harmonious society where people can get along without killing each other.

But if the UK politicians are going to say “F–k the law” and shatter the very foundation of representational government they claim to be operating, then they are essentially declaring the UK is now a free-for-all, lawless society. Millions of UK citizens are going to wake up and ask themselves, “If all the laws about making news laws are now being abandoned, then aren’t ALL laws now null and void?”

Hence you will see a massive unleashing of murder, robbery, looting and so on. Specifically, I can imagine a scenario where a rather large number of UK citizens would likely decide to just start murdering members of Parliament. After all, there are no longer any real laws if the UK government itself is going to nullify the very foundation of democratic representation. At that point, it’s lawless chaos and “every man for himself” — a quote which obviously needs to be updated for today’s transgender-aware culture, so I’ll restate it in P.C. language: “Every transgender for ziself.”

The point is that the UK cannot nullify the BREXIT vote without admitting it is a lawless, totalitarian regime where “voting” is nothing more than theatrical illusion to occupy the attention of all the “useless idiots” who vote. That would be a huge wake up call for the average UK sheeple person who has been laboring under the hilarious delusion that government serves the interests of the people, wouldn’t it?

It’s also interesting to note that it’s always the progressive leftists in every society who despise the democratic process and incessantly seek to overrule democracy with tyranny. You see this reflected in the executive orders of Obama, by the way, and the mass urging of him to “bypass Congress” and function as a dictator on every issue, from immigration to gun control. This, too, has been widely supported by the political left in America… the same cabal of anti-freedom, anti-American totalitarians who have left our entire nation wide open to illegal immigration as a voter recruitment drive to make sure they can out number votes from actual citizens at every election.

No wonder there’s so much REVOLT in the air these days… people everywhere are tired of suffering under incompetent, criminal governments that rule over the peons with an iron fist. It’s time for a global citizens’ revolt against tyranny. And if the ballot box is taken away as a vehicle for achieving the restoration of democracy and law, then the only remaining option is to take back your country by the raw will of the governed, using whatever tools are available.

Such is the history of the world, and it’s about to be repeated across the globe, to the great dismay of the panicked globalists who can’t figure out why they’ve lost control…