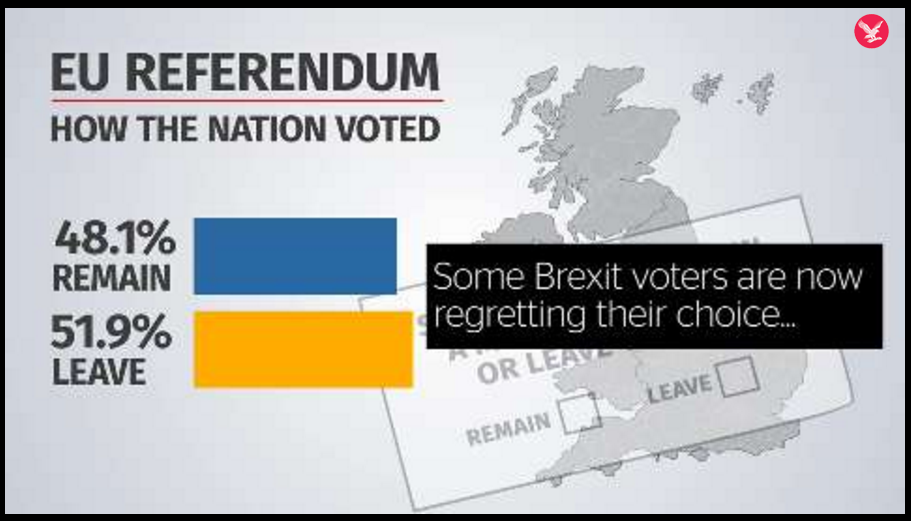 More than one million people regret their vote to leave theEuropean Union, an opinion poll carried out in the wake of the Brexit decision suggests.

Of the 17.4 million people who voted Leave, 1.1 million now say they wish they had not, if the results of a Survation poll are to be believed.

The poll found that people who used Brexit as a protest vote – or thought their vote “wouldn’t matter” – are now having second thoughts.

One Twitter user posted: “I personally voted Leave because I believed these lies and I regret it more than anything. I feel genuinely robbed of my vote.”

The Leave camp polled 1.3 million more votes than Remain in the 23 June referendum.

But about seven per cent of those surveyed by Survation said they regretted ticking “Leave” – a number equal to about 1,130,000.

Yet the poll also showed that thousands of people regretted their vote to remain in the EU, according to the Mail on Sunday.

Despite Leave just winning the referendum, an equivalent of 696,000 people apparently wish they had lent their support to the victorious side.

Had they changed their votes, Remain would not have won but the margin for Brexit would have been narrowed to less than a million.

As it stands, the UK has been split 48.2 per cent and 51.8 per cent for leaving the EU – with Scotland, London, Northern Ireland, some cities and the younger generation voted out by the rural English and older generations.

Brexit voters have even called electoral services asking if they can change their vote, prompting anger among Remain campaigners over the so-called “Bregretters”.

Meanwhile, a petition for a second referendum on EU membership has garnered more than 3.6 million votes.

Another Brexit voter tweeted: “Urm, I think I kind of regret my vote. I had no real reason to pick what I did!”

David Cameron has said he will step down in the next three months and a new leader will have to negotiate Article 50, which officially triggers an exit from the EU.

Leave campaigners Boris Johnson and Michael Gove have said there is “no need for haste”, but EU officials have said the British people’s will must be respected and Britain will have to leave as soon as possible.