Did Saudi Arabia Conspire With Israel To Trigger The Hajj Stampede That Killed Over 2150 Pilgrims? 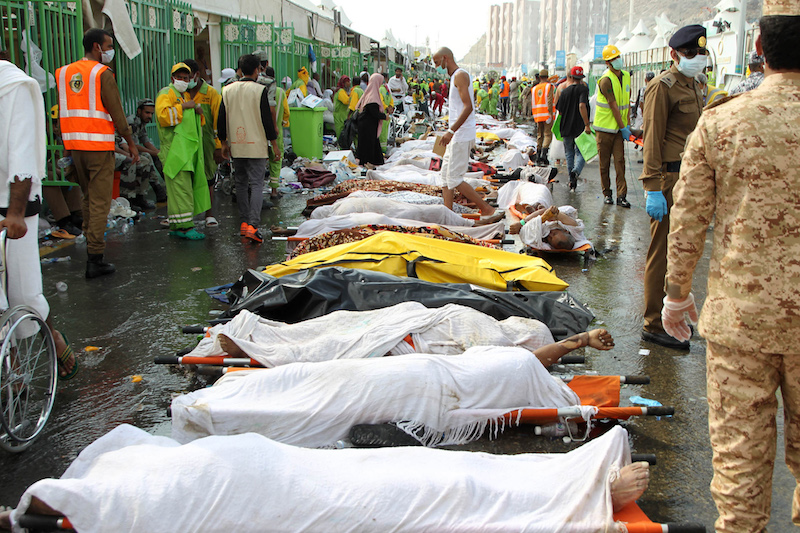 Did Saudi Arabia Conspire With Israel To Trigger The Hajj Stampede That Killed Over 2175 Pilgrims?

Saudi Arabia Has Effectively Destroyed The Hajj, Will Never Be The Same

TMR Editor’s Note:
The undeclared war between Iran and Saudi Arabia has ratcheted up considerably with the bold abduction of high-ranking Iranian Diplomats and Revolutionary Guard commanders carried out during the recent Mina stampede.  At least 2177 pilgrims were killed during Hajj on September 24, 2015 which some authorities claim was a highly coordinated black operation executed by Saudi authorities and MOSSAD agents in order to kidnap key Iranian attendees.

These explosive charges include an elaborate conspiracy between Israel’s MOSSAD and the House of Saud to kill hundreds if Iranian pilgrims during the holiest day of the Islamic calendar.  At last count 465 Iranians were killed on the same day observed as the “Stoning of the Devil” in the holy city of Mina just east of Mecca.  Iran contends that losing the most pilgrims among all nations represented during this manmade tragedy was no accident.

In light of these unprecedented allegations every other stampede which has taken place at major religious sites and on holy days ought to be be re-evaluated.  Because of the fierce rivalries that exist worldwide between different religions, as well as between various sects within the same religious traditions, this year’s Mina stampede has revealed the worst possible cause of such a terrible human tragedy.

The following article is a substandard translation of the original report published by the Nahrain News Agency.  Nevertheless, TMR felt it contained too many important disclosures not to post.

Stampede At Hajj In Saudi Arabia Reportedly Killed At Least 2,177

The toll keeps rising from the Sept. 24 disaster outside Mecca as individual countries identify bodies and work to determine the whereabouts of hundreds of pilgrims still missing.

DUBAI, United Arab Emirates (AP) — The crush and stampede that struck the hajj last month in Saudi Arabia killed at least 2,177 pilgrims, a new Associated Press tally showed Monday, after officials in the kingdom met to discuss the tragedy.

The toll keeps rising from the Sept. 24 disaster outside Mecca as individual countries identify bodies and work to determine the whereabouts of hundreds of pilgrims still missing. The official Saudi toll of 769 people killed and 934 injured has not changed since Sept. 26, and officials have yet to address the discrepancy.

Crown Prince Mohammed bin Naif bin Abdul Aziz, who is also the kingdom’s interior minister, oversaw a meeting late Sunday about the disaster in Mina, according to the official Saudi Press Agency. The agency’s report did not mention any official response to the rising death toll.

“The crown prince was reassured on the progress of the investigations,” the SPA report said. “He directed the committee’s members to continue their efforts to find the causes of the accident, praying to Allah Almighty to accept the martyrs and wishing the injured a speedy recovery.”

King Salman ordered the investigation into the disaster, the deadliest in the history of the annual pilgrimage. It came after a crane collapse in Mecca earlier that month killed 111 worshippers, and the twin disasters marred the first hajj to be overseen by the king since he ascended to the throne at the start of this year.

The Saudi king holds the title of “Custodian of the Two Holy Mosques,” and the monarchy’s supervision of the hajj is a source of great prestige in the Muslim world. Riyadh has rejected a suggestion by Shiite power Iran, its main regional rival, to have an independent body take over planning and administering the five-day hajj pilgrimage, which is required of all able-bodied Muslims once in their lifetimes.

Iran has repeatedly blamed the disaster on the Saudi royal family, accusing it of mismanagement and of covering up the real death toll, which Tehran says exceeds 4,700, without providing evidence.

“The lying and hypercritical bodies, which claim to (be promoting) human rights, as well as the Western governments, which sometimes make great fuss over the death of a single person, remained dead silent in this incident in favor of their allied government,” Iran’s Supreme Leader Ayatollah Ali Khamenei said Monday, according to a transcript on his website.

“If they were sincere, these self-proclaimed advocates of human rights should have demanded accountability, compensation, guarantee for non-recurrence and punishment for the perpetrators of this catastrophe.”

Iran and Saudi Arabia are deeply divided on a host of regional issues and back opposite sides in the wars in Syria and Yemen, where a Saudi-led coalition has been at war with Iran-backed Shiite rebels, known as Houthis, since March.

Saudi Arabia has meanwhile been targeted in gun and bomb attacks by an affiliate of the extremist Islamic State group, which holds a third of Iraq and Syria in its self-declared “caliphate.” Like al-Qaida before it, the IS group views the Saudi royal family as illegitimate because of alleged corruption and its alliance with the United States.

CREDIT: ASSOCIATED PRESSAfter the hajj stampede, Iranians protested in front of the Saudi Arabian embassy in Tehran. They blamed the Arab country for the deadly stampede.

The AP count of the dead from the Mina crush and stampede comes from state media reports and officials’ comments from 30 of the over 180 countries that sent citizens to the hajj.

Iran leads all the affected countries, saying it had 465 pilgrims killed. Many of the dead also came from Africa. Mali said it lost 254 people, while Nigeria lost 199, Cameroon lost 76, Niger lost 72, Senegal lost 61, and Ivory Coast and Benin both lost 52.

Others include Egypt with 182, Bangladesh with 137, Indonesia with 126, India with 116, Pakistan with 102, Ethiopia with 47, Chad with 43, Morocco with 36, Algeria with 33, Sudan with 30, Burkina Faso with 22, Tanzania with 20, Somalia with 10, Kenya with eight, Ghana and Turkey with seven, Myanmar and Libya with six, China with four, Afghanistan with two and Jordan and Malaysia with one.

The previous deadliest-ever incident at hajj was a 1990 stampede that killed 1,426 people.