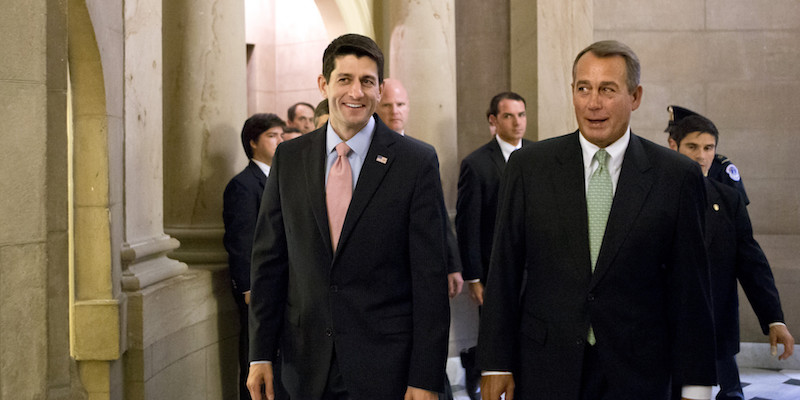 ‘WHERE WERE YOU’ WHEN WE TRIED TO UNSEAT BOEHNER? House Ways and Means Committee Chairman Paul Ryan says he will run for speaker of the House if the party can unify behind his candidacy and agree to his conditions, but the GOP congressman who first challenged John Boehner earlier this year says those demands are a non-starter.

Ryan has made no secret he doesn’t want the job. On Tuesday, he said he would agree to run if the party unifies around his candidacy and members of his party vow not to launch any efforts to remove him if he becomes speaker. He also demanded a more concerted effort to promote conservative ideals to turn the nation around and be permitted to protect the time he spends with his family.

While many House Republicans are hailing Ryan as a consensus choice, others definitely are not.

“He talked about all the shortcomings of the current leadership while Mr. Boehner was there, talking about the shortsightedness, we didn’t have a vision, we didn’t have a long-term outlook, we have bills brought up right at the deadline so it’s a crisis. We’re not unified,” said Rep. Ted Yoho, R-Fla. “He’s been here for 17 years. He’s dealt with a broken system, not willing to challenge it until the moment arrives. That, to me, is not leadership.”

Yoho mounted an 11th-hour challenge to Boehner just prior to the start of the 114th Congress in January. Two other members subsequently joined the race for speaker. Boehner survived the insurgency but last month announced his impending resignation as he faced what was likely to be a bruising fight to keep the top job in Congress.

More than two-dozen Republicans defected from Boehner in that January vote. Yoho is quick to point out that Ryan was not one of them.

“Where were you come January first of 2015, when three of us put our heads on the chopping block to run for the speaker of the House?” Yoho asked. “Dan Webster (R-Fla.) was the one we really wanted to run. Where were you back then, standing up saying the emperor doesn’t have any clothes or the system is broken and we need to change it?

“If you weren’t willing to lead and challenge leadership back then, what makes me think you’re going to be any different than the current leadership structure?”

While Ryan’s past performance bothers Yoho, his forbidding of any efforts to remove him as speaker is especially chilling to Yoho.

“I think the last caveat was, ‘I’ll take this job if you get rid of the motion to vacate the chair.’ That was something our Founding Fathers put in place for us to hold people in our House accountable,” Yoho said. “To take that off the table is like, ‘I’ll take the job if I know I can’t be fired.”

Yoho said if Ryan makes good on his promise to be a speaker who tirelessly champions conservative principles, no one is going to undermine his leadership.

“Each one of the members of Congress, we can be removed in the next election,” he said. “I think that needs to be over anybody’s head. If you’re doing your job and you’re doing it well, it’s not a threat.”

The process to replace Boehner is taking much longer than planned. Boehner initially set Oct. 8 for leadership elections. However, that day, House Majority Leader Kevin McCarthy dropped his bid for speaker and Boehner pushed back elections, which are now set to come Oct. 28.

Yoho says that delay was unnecessary and another example of poor leadership.

“My hope is now that the leadership team with Mr. Boehner does not upset the process again,” he said. “Had they not done what they did on Oct. 8, we would already have a new speaker installed. We would be dealing with a Nov. 3 debt-ceiling deadline. We’d be dealing with funding the government on Dec. 11. We would be finishing up our appropriations.

“The lack of leadership – and this is why we’re fighting so hard to replace it – has created this angst that we’re seeing over the last three weeks,” he said.

Yoho backs Webster for the job, and Webster presently has the endorsement of the influential House Freedom Caucus.

Other than adamantly opposing any effort to scrap the option of members to “vacate the chair,” Yoho said there really don’t need to be a lot of new rules. He said GOP leaders need to abide by the ones already in play, and one in particular is on his mind.

“Follow the rules that are already in place,” he said. “We’ve already got a 49-page rule book, one of them being the 72-hour rule. Before we vote on a bill, every member of Congress has 72 hours to review it. We don’t do that now. We fought to do that, and leadership said no, we can’t do that.”

Two other issues are critical for Yoho and other members of the House Freedom Caucus. One is a commitment to pursue immigration reform in stages by securing the border, enforcing existing law and addressing guest-worker programs. He also wants an end to leadership punishment for members who don’t vote as the party brass would like. Committee slots and travel perks have been stripped from some members. Yoho said that needs to stop.

Whether Ryan becomes speaker will be determined in the coming days. Regardless, Yoho has no regrets about his challenge to Boehner in January that triggered a series of events leading up to this change in leadership.

“I’m happy with my role and the results we’ve gotten. We ran on ‘Washington Lacks Leadership.’ It needs new leadership and a direction and a vision. I’m really happy where we’re at right now. We just don’t need to back up. We need to go forward,” said Yoho, who is confident this episode will ultimately be good for the country.

“This will all work out because the American people sent us here because it was a broken system,” he said. “We’ve put in the mechanics to change that system. Now, we’ve got to go and get our work done. The sooner we get this speaker’s race over, the better the American people will benefit and our country will benefit.”
http://www.wnd.com/2015/10/where-were-you-when-we-tried-to-unseat-boehner/#jvY8SyM44rQy2rxH.99