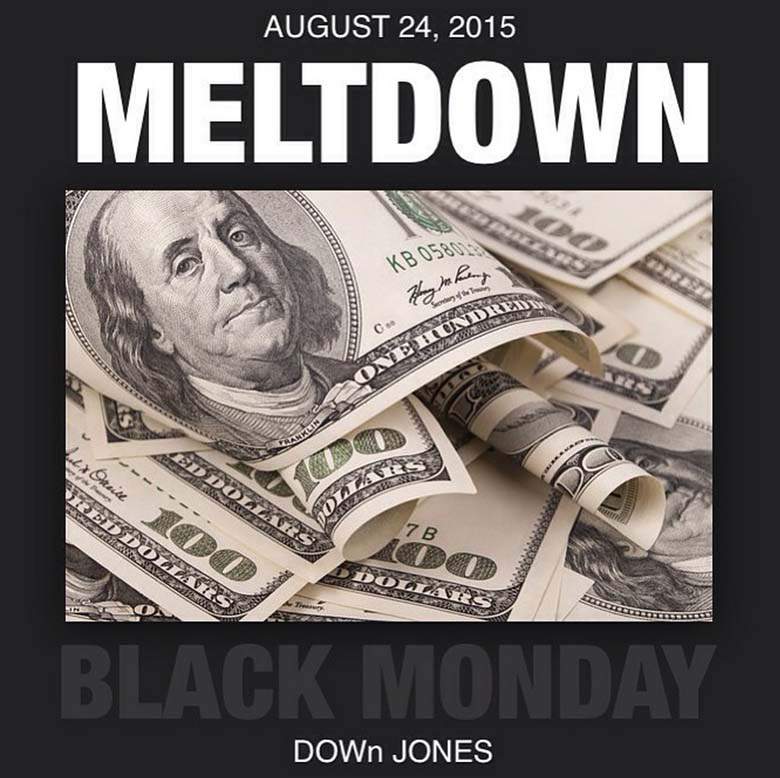 As Usual, U.S. Markets Are Spared the
Bloodbath by Plunge Protection Team

Why are certain foreign markets left to crash and burn
while the Anglo-American markets avoid the carnage? If nothing else is learned from today’s Black Monday — black for everyone but Wall Street once the Plunge Protection Team reversed almost half of the 1000 plus point loss at the opening bell — it is this.  That the game has been systematically fixed in favor of the Fed’s golden boys on Wall Street.  Wall Street ultimately gains at the expense of Main Street not only in the USA but also abroad. Everything is fair game on the global monopoly board but Wall Street-protected properties.

Question: How is an almost 1100 point market loss made up within minutes except by massive manipulation of the marketplace?

Answer:  Through the multi-decade machinations of the Fed–Goldman Sachs conspiracy

No one even denies anymore the incestuous relationship, that has existed practically forever, between Goldman Sachs and the Federal Reserve Bank of New York.  There was even the following NYT exposé (linked below) on the highly dubious nature of their ever-deepening financial affair.  In fact the revolving door between these two financial powerhouses only seems to move faster by the month the more their dirty deeds are revealed.  See here what they did to the entire nation of Greece!

It is this type of corrupt, crony, corporate capitalism which has created the current dangerous and unprecedented conditions throughout the Global Economic and Financial System (GE&FS).  The relationship between Goldman and the Fed goes back many decades and is filled with illicit conduct which has systematically fleeced the American people.  Together their socially irresponsible behavior has likewise left whole nations broke, busted and disgusted.  Truly, Yankee-style predatory capitalism supported by ever-ready gunboat diplomacy is transforming the planet into a post-apocalyptic dystopian wasteland.

Despite the fact that the USA’s house is in such disorder, rather than fix the many profound and fundamental domestic problems, the Wall Street vultures prefer to find another carcass to feed upon after the economic hitmen and financial terrorist have sufficiently incapacitated their next victim abroad.  This exact implementation plan has been fastidiously executed in nations rich and poor, large and small.  Witness the CIA-coordinated protests in Brazil during this August, as well as constant interference in Venezuela. 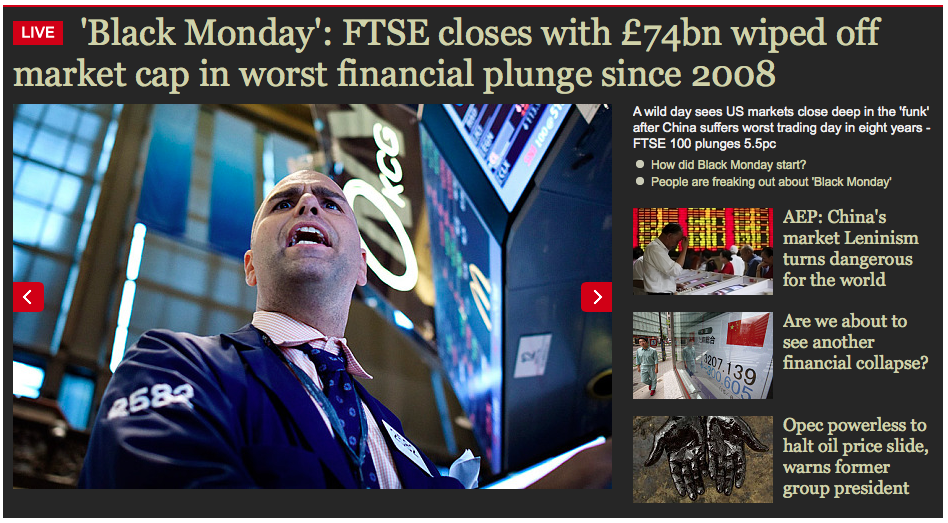 Screenshot from The Telegraph on Black Monday, August 24, 2015

World Instability and Insecurity at All-time High Because of Goldman

That’s not to say that there aren’t other highly predatory financial engineering firms looking to execute a perfectly controlled demolition of a company, a country, a city or a corporation like they did to Lehman Brothers.  That’s exactly what these folks did to Lehman Brothers back in 2008 when they filed for bankruptcy on September 15th to kick off the Great Recession.  At the time their debt was calculated to be $640 billion by their bankruptcy attorney.

What must be recognized by the world community of nations post haste is that it is the bankers and the brokers who are wreaking havoc around the world.  Yes, there are many other corporate overlords such as Big Oil, Big Pharma, Big Agra, as well as the Military-Industrial Complex, which have done their share of the planetary damage.  However, at the end of the day, every war, every conflict, every skirmish can be boiled down to a bankster’s war.

The world is now such an unstable mess of compromised nations and states that it will only take a small match to light the combustible tinderbox.  Likewise, financial insecurity is so serious at every level — individual, family, city, state, nation — that a domino effect can easily knock the whole place down.  It is because of criminal corporate behavior, which the SEC and FTC allow the Goldman Sachs of the world to get away with day after day, that China is in now a free-fall.  That Greece is in the financial fight for their life, as are all the PIIGS nations, which is further evidence of their serial financial criminality.

Not only is the entire European Union in a very precarious situation, so are many other nations which do business the EU.  When the largest economic union in the world can be so seriously undermined by the financial sector, it is time to re-examine the true causes. This has not happened, nor does it appear to be on anyone’s agenda.  Consequently, the GE&FS is in for a VERY rude awakening.  Looks like China, India and Japan are getting theirs right now! The markets are rigged; they always have been.  Now, however, the stakes are so high that nations rise and fall with the price of oil or change in currency exchange rates.  The world has become an extremely volatile place.  The new normal is now so extreme that the wiggle room that once existed is all gone.  Virtually everyone sits right between a rock and a hard place.

The power that the bankers and brokers now wield greatly exceeds their capacity to use it responsibly.  Forget about using their influence wisely, the banksters are actually responsible for the perpetual war economy that has been foisted on the American people. This situation cannot be allowed to continue.  If it does, it will only set up the planetary civilization for the “Crash of the Millennium“.

Lastly, the USA has proven its inability to function as the sole superpower of the world. It has abused its financial power and economic influence everywhere it goes.  As the military arm of the New World Order, the USA has incessantly projected its military power in ways that are as shockingly brutal as they are shamelessly reckless.  This offensive and disrespectful conduct by the U.S. Federal Government will no longer be tolerated as both Russia and China have recently asserted.  Should the White House ignore their joint message, there will be grave financial and economic consequences.

Here’s how the DJIA ended up on Black Monday.  When today’s 588 point loss is added to the 885 total loss from last Thursday and Friday, we see a 1473 decline in just 3 days. The Biblical Shemitah Jubilee, also known as the Super Shemitah, is just around the corner.  September and October will prove to be the single most cataclysmic period in modern American history.  The only way that the earth-shattering effects of the Shemitah can be avoided is for the American body politic to come to its senses and demand the necessary changes — NOW!

What exactly is the Shemitah?  The following essays and articles will explain.