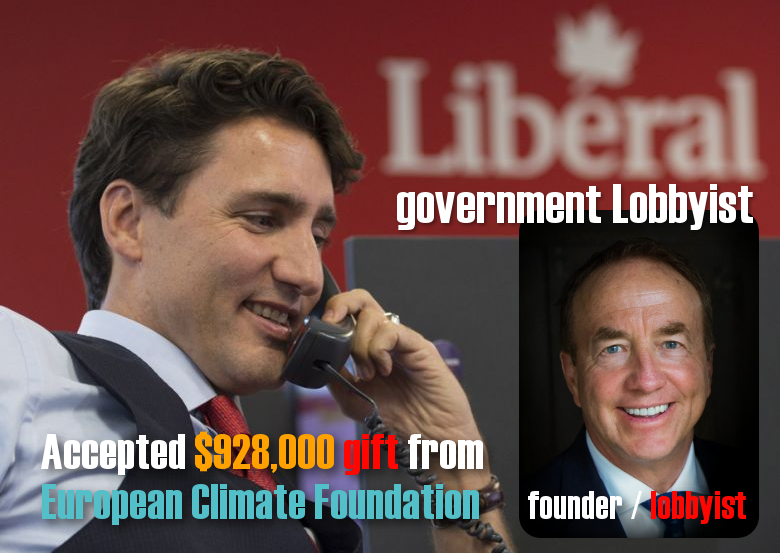 $928,000 gift from European Climate Foundation founder and government lobbyist McCall MacBain to 2015 Federal Election candidate Justin Trudeau represents the single largest bribery scandal in Canadian history.  The gift, $428,000 in 2015 (Trudeau was an election candidate) & $500,000 in 2016 by McCall MacBain (European Climate Foundation) is defined by the criminal code of Canada as criminal offences of: foreign influenced activity (defined by Canadian Security Intelligence Service Act as threats to the security of Canada), Frauds on the government / influence peddling, breach of trust, fraud, theft & Bribery of judicial officers in that the foreign European Climate Foundation founder and lobbyist McCall MacBain paid a member of Parliament almost a $million to influence (solicit) Justin Trudeau to pledge, in his official capacity as Prime Minister of Canada, $2.65 billion to MacBain’s climate change cause / agenda.

The Conflict of Interest Act & Canada Elections Act also prohibited the Liberal Party 2015 election candidate Justin Trudeau from accepting the $928,000 gift from climate change lobbyist McCall MacBain. Gift might reasonably be seen to have influenced Trudeau to pledge $2.65 billion to MacBain cause.

Evidence supporting charge that McCall MacBain did in fact donate gift of $928,000 to influence / lobby Trudeau in his official capacity as Prime Mister of Canada was first made known in National Post article “Money began to rain on Trudeau Foundation once Justin took over Liberals, analysis shows” In that article it was confirmed that, “one in six donors (to Trudeau family foundation) have affiliations with organizations currently lobbying the government”. The largest donors in 2015, when Justin Trudeau was a 2015 election candidate, and in 2016, soon after Justin Trudeau became Prime Minster and pledged $2.65 billion to climate change fund (European Climate Foundation a benefactor), where made by the European Climate Foundation (founded by McCall MacBain in 2008 whose aims are to promote / lobby for EU’s climate and energy policies).

Government of Canada officials and Canadian citizens have since called for an investigation of Justin Trudeau by the conflict of interest and ethics commissioner and the lobbying commissioner to determine whether or not “people (McCall MacBain) might be using donations to the charitable Trudeau Foundation to gain influence with the government.” Foreign donations jumped from $53,000 in the 2014 fiscal year to $535,000 in 2016 — a ten-fold increase, because of just one donor, lobbyist McCall MacBain and his Switzerland-based European Climate Foundation. Climate change lobbyist McCall MacBain has been responsible for the majority of the increase in foreign donations and Justin Trudeau’s largest foreign donor.  The Switzerland-based foundation donated prohibited gift of $428,000 in 2015 and another prohibited gift of $500,000 in 2016. A red flag was raised by statement of fact foreign “gifts to the foundation have increased significantly since Justin Trudeau’s April 2013 election as leader of the Liberal Party of Canada”.

Breach of trust by public officer

122 Every official who, in connection with the duties of his office, commits fraud or a breach of trust is guilty of an indictable offence and liable to imprisonment for a term not exceeding five years, whether or not the fraud or breach of trust would be an offence if it were committed in relation to a private person.

Frauds on the government