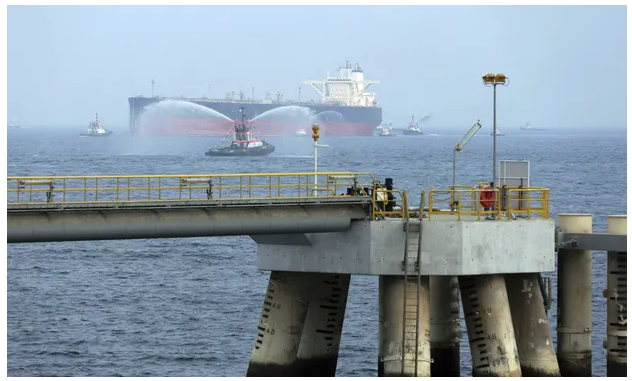 US Accuses Iran Of Attack On Saudi Tankers

Update: Just as everyone with half a frontal lobe had expected, the WSJ reported late on Monday that according to an initial U.S. assessment, “Iran was likely behind the attack” on the two Saudi Arabian oil tankers and two other vessels damaged over the weekend near the Strait of Hormuz, a U.S. official said, a finding that, whether confirmed or not, will certainly inflame military tensions in the Gulf and likely result in a global proxy war that drags in the US, China and Russia. Oh, and that would be the Persian Gulf for those wondering, not the Gulf of Tonkin, which is where another famous False Flag naval incident occurred.

Furthermore, as we predicted would happen on Sunday, this “official assessment”, was the first suggestion by any nation that Iran was responsible for the attack and follows a series of U.S. warnings against “aggression” by Iran or its allies and proxies against military or commercial vessels in the region.  Some more details from the WSJ:

The U.S. official, who declined to be identified, didn’t offer details about what led to the assessment or its implications for a possible U.S. response. The U.S. has said in the past week that it was sending an aircraft carrier, an amphibious assault ship, a bomber task force and an antimissile system to the region after it alleged intelligence showed Iran posed a threat to its troops.

“If they do anything, they will suffer greatly. We’ll see what happens with Iran,” President Trump said while meeting with Hungary’s Prime Minister Viktor Orban at the White House earlier on Monday.

The assessment, predictable from a mile away, squares perfectly with CIA veteran Mike Pompeo’s warning from just two days before the alleged attack, in which he said that “The regime in Tehran should understand that any attacks by them or their proxies of any identity against US interests or citizens will be answered with a swift and decisive US response,” the US Secretary of State wrote in a statement warning that Iran should not mistake US “restraint” for a “lack of resolve,” and criticizing Iran for “an escalating series of threatening actions and statements in recent weeks.”

Two days later Iran – according to US officials – staged the most brazen attack on oil tankers in the Straits of Hormuz in years.

Of course, Iran would have to be utterly irrational to provoke such a sequence of events that culminates with a US campaign against it; so irrational in fact, as to be on par with the false flag chemical attacks staged by the “democratic powers” in Syria on various occasions, whose only purpose was to provoke the Trump administration into launching what were ultimately unsuccessful “regime change” air strikes.

That said, at this point we would urge readers to go long Brent call spreads, or outright calls, as it now appears that the Trump administration is fully intent on launching a “limited” military confrontation with Iran. Which, considering that Iran’s biggest geopolitical backers are China and Russian, will be anything but limited.

Despite now near daily anti-Iran bluster coming out of Washington, fueling rising US-Iran tensions, and now with a major “incident” involving the reported “sabotage” attack on Saudi and UAE-docked oil tankers from an unknown perpetrator, leaders in Tehran do not see war on the horizon. Interestingly, the incident involving the Saudi tankers at the Emirates’ port of Fujairah on Sunday came a mere days after the US warned that “Iran or its proxies” could attack commercial vessels in the region — though there’s yet to be blame officially cast over the latest mysterious incident.

Instead, Iran does see possible desperate attempts at a Psyop in the works: “The US military forces’ deployment in the Persian Gulf is more of the nature of psychological warfare. They are not ready for a war, specially when Israel is within our range,” Iranian Parliament’s Vice-Speaker Ali Motahhari said on Sunday after a closed door session with MPs, according to FARS news agency.

But the specific mention of Israel as being “within our range” marks a significant counter-threat which could easily make war a reality, now also given the Persian Gulf region is on edge after Saudi Arabia said overnight that two of its oil tankers were attacked while headed near the Strait of Hormuz. Meanwhile the US Department of Energy says it’s “monitoring the oil markets, and is confident they remain well-supplied” amid fears there are efforts to “disrupt shipping,”according to Bloomberg.

The Saudis said in the aftermath of the still mysterious incident there was “significant damage to the structures of the two vessels” — identified by shipping monitors as the Amjad and crude tanker Al Marzoqah. Other tankers were also reported damaged in the UAE’s Fujairan port.

Later in the day Monday, images and footage began to appear online via Middle East news sources purporting to show damage from the “sabotage attack” of unknown origin on multiple international vessels.

And in predictable fashion, the Gulf Sunni dominated Arab League jumped in to back Saudi Arabia’s use of “all measures” to safeguard their security, per the AP:

The head of the Arab League has condemned attacks that targeted vessels off the coast of the United Arab Emirates the previous day, including two Saudi oil tankers, as “criminal acts.”

Ahmed Aboul-Gheit said in a statement on Monday that these acts are a “serious violation of the freedom and integrity of trade and maritime transport routes.”

He says the Arab League stands by the UAE and Saudi Arabia “in all measures taken to safeguard their security and interests.”

Senior State Dept. official Brian Hook responded with “no comment” when asked if Iran was to blame for the alleged attacks on the commercial vessels near the vital Strait of Hormuz.

Hours after, President Trump weighed in by warning Iran against any “provocation” or else the country “will suffer greatly” if conflict breaks out with the US. Trump told reporters while meeting with Hungarian Prime Minister Viktor Orban at the White House:

Though so far it appears minor, the sabotage incident could signal the start of a Gulf of Tonkin type incident in the Persian Gulf, which would ultimately force Iran into a direct confrontation with the US and its regional allies, given also the ease with which any major event which disrupts shipping — and impacting global oil markets — would immediately be blamed on Iran, and uncritically spread through global and western media.

#BREAKING The Norwegian ship "André Victoria", which was subjected to subversive acts in the #Fujairah against four ships near the territorial waters of the #UAE, received a powerful blow that almost led her to sank, according to a video footage obtained by Russia Today pic.twitter.com/Nl15pFt81P

Seeming to be well aware of such a possibility, Iran on Monday urged caution and even directly suggested the events could be false-flag provocations designed to draw regional enemies into conflict. Foreign Ministry spokesperson Seyyed Abbas Mousavi said on Monday the incidents were “alarming and regrettable,” and urged that more details were needed.

He further warned against  “plots by ill-wishers to disrupt regional security” and called for “vigilance of regional states in the face of any adventurism by foreign elements.”

Last week the US deployed a carrier strike group to the region and further has a B-52 bomber group monitoring the skies over the Persian Gulf from al Udeid airbase in Qatar.

While the Iran’s Revolutionary Guard has also dismissed the recent US military build-up as “nothing but psychological warfare”, saying that “the US lacks power and does not dare to start a war against Iran,” it has also said its finger is on the trigger, ready to respond to any aggressive acts.