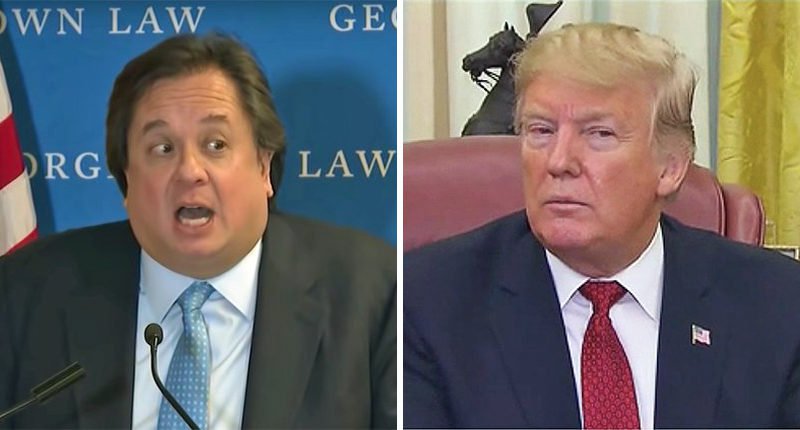 “George Conway, often referred to as Mr. Kellyanne Conway by those who know him, is VERY jealous of his wife’s success & angry that I, with her help, didn’t give him the job he so desperately wanted,” Trump tweeted. “I barely know him but just take a look, a stone cold LOSER & husband from hell!”

George Conway responded in a three-word tweet: “You. Are. Nuts.”

“You seem determined to prove my point,” Conway continued. “Good for you! #NarcissisticPersonalityDisorder.”

Conway, a persistent Trump critic, drew Trump’s ire over the weekend when he questioned the president’s mental health.

“His condition is getting worse,” Conway tweeted after posting sections of the “Diagnostic and Statistical Manual of Mental Disorders” to his Twitter feed. (Kellyanne Conway told reporters Monday that she does not “share those concerns.”)

Trump campaign manager Brad Parscale responded with a tweet falsely claiming Conway was “turned down” for a “job he desperately wanted” and that “Mr. Kellyanne Conway” is “jealous of her success.” Early in the Trump presidency, George Conway was offered a top job at the Justice Department as chief of the civil division — a post that would have put him in charge of defending the Trump administration in lawsuits throughout the country. But in June 2017 Conway pulled out, saying only that “this is not the right time to leave the private sector.”

In an interview with the Yahoo News podcast “Skullduggery” in November, Conway said that as he was about to accept the job, he was having doubts about the president’s relationship with the Justice Department, among other developments in the administration.

“I’m filling out the financial forms and it’s like … I’m watching this thing, and it’s like the administration is like a s***show in a dumpster fire,” Conway said. “And I’m like, ‘I don’t want to do that.’”

Conway has used his Twitter feed and occasional op-ed essays to defend against Trump’s attacks on the rule of law — and lately to point out what he sees as the president’s instability. Earlier this month, Conway called for a “serious inquiry” into Trump’s state of mind.

“Have we ever seen this degree of brazen, pathological mendacity in American public life?” Conway tweeted. “At any level of government in this country, in any party, have we ever seen anything like this? It’s beyond politics. It’s nuts. It’s a disorder.”

He added: “Whether or not impeachment is in order, a serious inquiry needs to be made about this man’s condition of mind.”

On Tuesday, Conway shared with Trump a link to a Rolling Stone article titled “Trump’s Mental Health: Is Pathological Narcissism the Key to Trump’s Behavior?”

“Once someone understands narcissistic personality disorder, they understand you,” Conway wrote. “And why you’re unfit and incompetent for the esteemed office you temporarily hold.”

In his “Skullduggery” interview, Conway admitted he wept with joy and pride on election night while reflecting on how Kellyanne Conway helped engineer Trump’s upset victory over Hillary Clinton.

“Look, my wife did an amazing thing,” he said. “She basically got this guy elected.”

Conway told the Washington Post this week that he remained proud of his wife and was not “jealous” of her. But he also said that he wished she did not work for the White House.

He also said tweeting about Trump actually helps his marriage.

“The mendacity, the incompetence, it’s just maddening to watch. The tweeting is just the way to get it out of the way, so I can get it off my chest and move on with my life that day,” he said. “That’s basically it. Frankly, it’s so I don’t end up screaming at her about it.”

The president expanded on his George Conway critique while speaking to reporters on the South Lawn on Wednesday afternoon.

“I don’t know him. He’s a whack job,” Trump said. “I think he’s doing a tremendous disservice to a wonderful wife. Kellyanne is a wonderful woman.”

Kellyanne Conway defended Trump’s attacks on her husband in an interview with Politico.

“He left it alone for months out of respect for me,” Conway said. “But you think he shouldn’t respond when somebody, a non-medical professional, accuses him of having a mental disorder? You think he should just take that sitting down?

“The president is obviously defending me,” she added. “He could privately say to me, ‘Honey you’re a distraction. We love you. You’ll always be a part of the family but go be with your kids. They need you. Go make a million dollars an hour. Go do that honey.’ It’s the opposite.”