5G: A Professor of Biochemistry Explains the Hard Science of the Medical Risks and Health Dangers 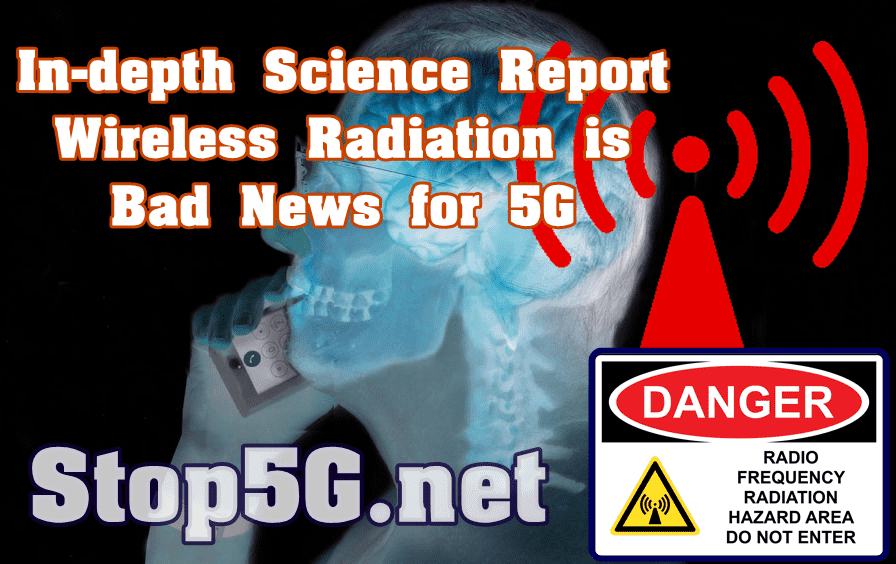 5G: A Professor of Biochemistry Explains the Hard Science of the Medical Risks and Health Dangers

5G: Great risk for EU, U.S. and International Health! Compelling Evidence for Eight Distinct Types of Great Harm Caused by Electromagnetic Field (EMF) Exposures and the Mechanism that Causes Them

The document that follows was, in its original form, sent to many of the authorities of the European Union, in conjunction with other documents sent to the same people by a group of European scientists. It was in response two documents that were, in turn, written by Mr. Ryan and Dr. Vinciūnas responding to a large group of European and other international scientists expressing great concern about the safety of 5G. I was asked by the leaders of the group of scientists to write my own response to those two documents. Mr. Ryan made the statement that “There is consistent evidence presented by national and international bodies (International Commission on Non Ionising Radiation Protection – ICNIRP, Scientific Committee on Emerging and Newly Identified Health Risks (SCENIHR) that exposure to electromagnetic fields does not represent a health risk, if it remains below the limits set by Council Recommendation 1999/519/EC1.” In fact, that is not either the ICNIRP or SCENIHR position – their position, and similar positions have been taken by the U.S. FCC, FDA and the National Cancer Institute, is that the evidence is inconsistent or conflicting and therefore, in their view, no conclusions can be drawn. Some of these organization have also stated that there is no known mechanism by which effects can be produced. What is shown below is that there is a vast amount of evidence in the independent scientific literature that conflicts with both the conclusion about lack of demonstrated effects and the conclusion about lack of mechanism.

The European Commission, according to the Ryan and Vinciūnas documents and the U.S. National Cancer Institute, according to their web site, are both depending on the SCENIHR 2015 document to make judgments about EMF effects. Consequently, the reliability of SCENIHR 2015 is an essential element in determining the reliability of both of their assessments.

The document that is presented below, differs from the document that was emailed to EU authorities in three different ways: 1. The original document was sent as an email with multiple attachments. In this document attachments are simply provided as citations. The current document is a stand-alone document.  2. Some material is inserted to discuss positions taken by the U.S. FCC, FDA and National Cancer Institute, so as to be particularly relevant to the U.S. situation. 3. Substantial additional evidence is also provided.

The revised document contains six chapters followed by a citation list for the entire document:

Chapter 2: How Each Such EMF Effect Is Directly Produced via Voltage-Gated Calcium Channel Activation: Role of the Voltage Sensor in Producing the Extraordinary Sensitivity to EMF Effects

Chapter 4. EMFs Including Wi-Fi May Be Particularly Damaging to Young People

Chapter 5: The Importance of the SCENIHR 2015 Document and the Many Omissions, Flaws and Falsehoods in That Document 2

Chapter 6: The Great Risks of 5G: What We Know and What We Don’t Know

Both the earlier Ryan document and the more recent Arūnas document each fail to pay any attention to the extensive scientific literature that has been accumulated on non-thermal electromagnetic field (EMF) effects. The scientific consensus of independent scientists based on information accumulated over the last 7 decades is just the opposite of what each of them states. I am copying into this document, at the end of Chapter 1, a series of 8 extremely well-documented effects of such EMF exposure, together with a list of review articles, most of them being peer reviewed articles published in well respected journals in the PubMed database, that have each reviewed a body of evidence demonstrating the existence of each such effect.

What are the effects produced by non-thermal exposures to microwave frequency EMFs, where we have an extensive scientific literature?  Each of the following effects has been documented in from 11 to 35 reviews, listed at the end of Chapter 1.

(1) Three types of cellular DNA attacks, producing single strand breaks in the cellular DNA, double strand breaks in cellular DNA and oxidized bases in cellular DNA. Each of these DNA changes have roles in cancer causation and in producing the most important mutational changes in humans and other animals. Double stranded DNA breaks produce chromosomal breaks, rearrangements, deletions and duplications and copy number mutations; they also produce gene amplification, an important mechanism in cancer causation. Single strand breaks in cellular DNA cause aberrant recombination events leading to copy number mutations. Oxidized bases leading to point mutations. When these occur in somatic cells, they can each have roles in causing cancer. When these occur in germ line cells (and they have be shown to occur in sperm following EMF exposures), they cause the three most important types of mutations in future generations, chromosomal mutations, copy number mutations and point mutations. (19 different reviews documenting these types of cellular DNA damage)

(2) A wide variety of changes leading to lowered male fertility, lowered female fertility, increased spontaneous abortion, lowered levels of estrogen, progesterone and testosterone, lowered libido (16 reviews). Human sperm count has dropped to below 50% of what used to be considered normal throughout the technologically advanced countries of the world [1]. Reproductive rates have fallen below replacement levels in every technologically advanced country of the world, with a single exception. These include every EU country, the U.S., Canada, Japan, South Korea, Taiwan, Singapore, Australia and New Zealand. Reproduction averages in these countries is about 73% of replacement levels according to 2015 or 2016 data. A study on mouse reproduction [2] showed that radio/microwave frequency EMF exposure at doses well within our current safety guidelines produced substantial dose-dependent decreases in reproduction within the first set of litters; further exposure produced dose-dependent complete or almost complete sterility that was found to be largely irreversible. When we have a technology that is universally present in these technologically advanced countries, that we know impacts reproduction, and reproduction has already dropped well below replacement levels, and we may be facing a catastrophic and irreversible decline in reproduction and there are more and more plans to expose us still further, don’t you think that we should take note of the science? Mr. Ryan and Dr. Vinciūnas seem to be saying not at all. (Please note that the U.S. FCC and FDA also completely ignore this existential threat)

(3) Neurological/neuropsychiatric effects (23 reviews). My own paper on this [3] and two earlier reviews cited in it found that there are whole series of repeatedly found EMF effects which have also become extremely widespread complaints in our technologically advanced societies, namely: sleep disturbance/insomnia; fatigue/tiredness; headache; depression/depressive symptoms; lack of concentration/attention/cognitive dysfunction; dizziness/vertigo; memory changes; restlessness/tension/anxiety/stress/agitation; irritability. These findings are not just based on epidemiological findings but are also based on profound impacts of EMFs, at levels well within our safety guidelines, on brain structure and function and also on the mechanism of non-thermal EMF action discussed below. When we have these neuropsychiatric effects becoming more and more common in technologically advanced societies all over the world, and we know each of these is caused EMF exposures, shouldn’t we take note of this relationship?

(4) Apoptosis/cell death (13 reviews). The two most important consequences of large increases in apoptosis (programmed cell death) are in causation of the neurodegenerative diseases and lowered reproduction although there are others.

(8) Cancer causation (35 reviews). Brain cancer, salivary cancer, acoustic neuromas and two other types of cancer go up with cell phone use. People living near cell phone towers have increased cancer rates. Other types of EMFs are also implicated. Short wave radio, radio ham operators and people exposed to radar all are reported to have increased cancer incidence. Perhaps most telling, heavy-long term cell phone users have the highest incidence of brain cancer and have predominantly cancer increases on the ipsilateral side of the head (the side they use their cellphones), as opposed to the contralateral side. I have an in press paper [7], focused not on whether EMFs cause cancer but rather on how they can cause cancer. The paper shows that “downstream effects” of the main target of the EMFs in the cells of our bodies, can cause cancer in 15 different ways, including increases in cancer initiation, promotion and progression. Progression effects include both tissue invasion and metastasis. Each of these cancer causation effects are caused via mechanisms produced by downstream effects of the main non-thermal EMF mechanism, as discussed in Chapter 2.

(9) Therapeutic effects of such EMFs. Such EMFs when focused on a specific region of the body where there is some dysfunction and when used at specific intensities, can have therapeutic effects. In my 2013 paper [4], I cited 12 different reviews where EMF stimulation of bone growth was used therapeutically. There are something like 4000 papers on various therapeutic effects. Strangely, the telecommunications industry does not acknowledge these therapeutic effects, preferring rather to maintain the fiction that there are no non-thermal effects.