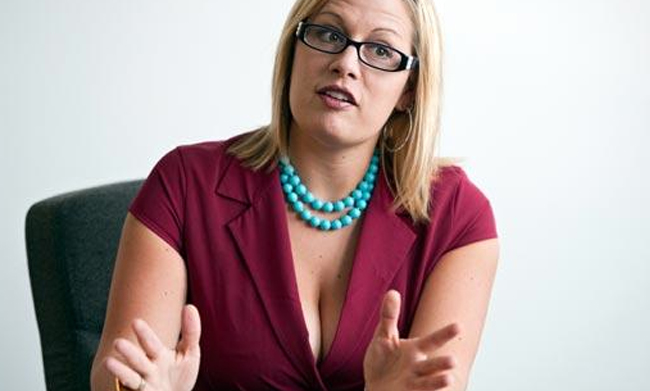 Was she running for the U.S. Senate or a job at HOOTERS?

The C.I.A. Never Stole So Many Elections in One Election Cycle for the Globalists

SOTN Editor’s Note: All the anecdotal data points to a stolen election in Arizona for Senator in November, 2018.  How does the conservative state elect an ultra-liberal Democrat candidate like Kyrsten Sinema to replace John McCain?  That’s right—they don’t.  Nor did they.

Hence, the $64,000 question is: Why did the Republicans permit such a transparent election theft?

Kyrsten Sinema and Martha McSally made history Thursday, becoming the first two women from Arizona sworn into the U.S. Senate.

Sinema made even more history than that, becoming the first openly bisexual person in the Senate.

So, naturally, everyone talked about her dress.

OK, maybe not everyone. But a lot of people on social media took note of Sinema’s outfit, which a non-fashion expert can best describe as a pink coat worn over a sleeveless white blouse with matching bracelet and flower-print skirt; she also wore a fur-looking thingamajig over her shoulders for the actual swearing-in.

Kyrsten Sinema is sworn in by Vice President Mike Pence during the swearing-in re-enactments for recently elected senators in the Old Senate Chamber on Capitol Hill on Jan. 3, 2019. (Photo: Alex Edelman/AFP/Getty Images)

Mary Emily O’Hara, associate editor at @INTO, tweeted, “Kyrsten Sinema is sworn in today as the nation’s first openly bisexual senator and the first-ever Mamie Van Doren cosplayer in congress.”

Kyrsten Sinema is sworn in today as the nation's first openly bisexual senator and the first-ever Mamie Van Doren cosplayer in congress pic.twitter.com/iAlvYdcuO1

There were plenty of other tweets and mentions — Dolores Umbridge, High Inquisitor of Hogwarts in the “Harry Potter” series, came up a few times, among other references. So, too, did Elle Woods, Reese Witherspoon’s character in “Legally Blonde.”

Kyrsten Sinema serving Elle Woods as she joins the Senate today is an energy we very much need to carry on through 2019.

Why does this matter? Probably in the big scheme of things it doesn’t. After all, no one was commenting on Vice President Mike Pence’s dark suit and blue tie (though it was some tie) that he wore as he swore Sinema and McSally in. (For her part, McSally’s purple dress didn’t generate a lot of social-media chatter, either. But maybe it should have — it was a nice bipartisan purple, which may say something about bipartisanship. Or not.)

But there were some notable things about Sinema’s outfit — particularly the color of her coat: pink. Remember, during the campaign (Sinema defeated McSally; Arizona Gov. Doug Ducey appointed McSally), McSally went after Sinema for protesting the Iraq war while wearing a pink tutu. There are a lot of colors in the world’s prism, and Sinema chose the same one she was mocked for wearing.

Andrew Kaczynski, a reporter for CNN, tweeted, “One of attacks from Republicans on Sinema during the campaign was she worn a pink tutu while protesting Iraq — which Republicans attempted to label as denigrating service members. I can’t help but thinking this is an elaborate troll.”

One of attacks from Republicans on Sinema during the campaign was she worn a pink tutu while protesting Iraq – which Republicans attempted to label as denigrating service members.

I can't help but thinking this is an elaborate troll. https://t.co/v5AohXSgrr

Others found political motivation, too, sort of. Constance Grady, a culture writer for Vox, tweeted, “Can we talk about the incredibly weaponized femininity Kyrsten Sinema is bringing to the party for her swearing in.”

Virginia Heffernan, a contributing editor at Wired and a columnist for the Los Angeles Times, was more forthright: “If there is a gender on earth that doesn’t want to have sex with Kyrsten Sinema I don’t want to be right.”

To be sure, there was some backlash toward those making fashion-choice comments, and it was a notable day for fashion all the way around. The New York Times, in promoting a story, tweeted, “Nancy Pelosi, wearing a hot pink dress, ascended to the marble dais in the center of the House chamber to accept the wooden gavel.”

That went over predictably poorly; not long after the Times tweeted the following: “We’ve deleted an earlier tweet to this article that was poorly framed.”

Hmm, these other tweets are missing the "wearing a charcoal suit." pic.twitter.com/03cncThxnL

But in general the vibe seemed to be more celebratory than anything else. How long that lasts is anyone’s guess.

And it makes you wonder: What will Sinema wear tomorrow? And should we care?