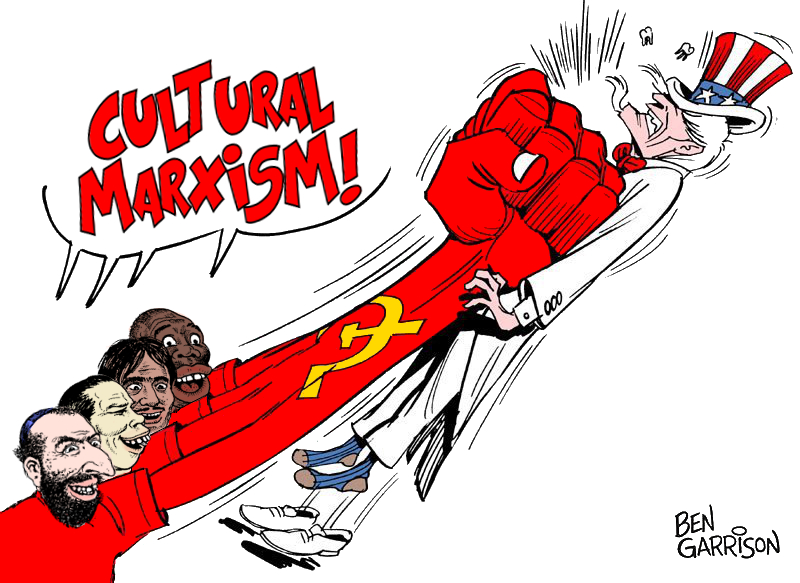 The term “cultural Marxism” has gained traction in recent years, usually employed pejoratively against young leftists and Social Justice Warrior ideologues. Like any such political pejorative, including those used by both the left and the right, the common rejoinder is that, by the overuse of the term, it has either been rendered meaningless or has always been without meaning.

But “cultural Marxism” is a term that has real meaning, and not necessarily a pejorative meaning (that would presumably depend on your own ideological preferences). The idea of cultural Marxism is derived from Marx’s theory of history as it evolved through the discipline of history by Marxist historians as they gradually became less orthodox.

The Marxist Theory of History

The original Marxist theory of history consisted of a few assumptions. The first is that the history of any society could be divided into three epochs: the ancient society, the feudal society, and the capitalist society. This was Marx’s unique idea of a “stages theory of history,” though stage doctrines of history were hardly new. The pre-Marxian Christian philosophy of history, for example, offered a similar pattern of stages from the epoch of sinless bliss, to that of wicked suffering, and finally, Christian salvation.

But the Christian philosophy of history moved under the invisible direction of a “Prime Mover”: God. Marx’s theory of history also contains an invisible Prime Mover: the ambiguously named “material forces of production.” What, specifically, these material forces of production actually are depends on the epoch. In feudal times, of course, it was land. In the capitalist epoch, it would be manufactories, or the capital goods that specifically replaced the feudal serf with the capitalist wage-laborer.

This leads to the second major element of Marx’s theory of history: class consciousness. Marx believed that each societal epoch contained internal contradictions that would progressively divide the different “classes” of people. In feudal times, this would be the serf and the landlord. Under capitalism, of course, Marx divided people into the proletariat and the bourgeoisie. The internal contradictions would lead to a conflict between classes known as the “class struggle,” and eventually, the lower class would overthrow society and usher in the subsequent stage. This is Marx’s famous class analysis.

The third and final major element of Marx’s theory of history was a determinist theory, positing that the movement of society from one stage to its successor stage was inevitable, and through this inevitability, the fourth and final epoch would eventually be ushered in by the proletariat’s overthrow of the bourgeoisie. Of course, this final stage was socialism (as I have detailed elsewhere , Marx did not originally make any distinction between socialism and communism, and this alteration to his theory of history was made by Vladimir Lenin and Joseph Stalin).

The deterministic outlook on history was not unique to Marx, either. As Mises points out in Theory and History , this deterministic idea was borrowed from and combined with the Enlightenment view of human progress.

The Enlightenment thinkers believed that as society progressed, human reason would inevitably yield an upward linear progression of history – being that each era of human history would be inevitably better than the period that preceded it. The Enlightenment determinism was necessarily optimistic, and Marx embraced their idea and combined it with his own stages doctrine. Thus, by accepting both the optimistic Enlightenment theory of human progress and Marx’s stages doctrine, Marx could argue, without any need to substantiate his claims, that the inevitable stage of socialism would be consequently better than the capitalist stage that preceded it, on the sole merit that it came later.

Marx’s criticisms of the “bourgeoisie economists” reveal his dedication to his theory in dismissing his opponents by charging that the classical economists were governed by their own class consciousness, and therefore their economic arguments should be dismissed without consideration. The only proof that anybody needed that socialism was the superior economic system was to accept that it was the historically inevitable economic system.

In brief summation, Marx’s theory of history consisted of (1) a stages doctrine (2) class consciousness, dictated by a “prime mover,” and (3) an optimistic version of historical determinism. The term “dialectical materialism” that refers to Marx’s theory of history is derived from the “materialistic” aspect of the “prime mover” contained in Marx’s “material forces of production,” and the “dialectical” aspect of the inner contradictions that plague each stage of society.

The stages doctrine of history was still considered useful by many historians, at least for analytic purposes. In the historiography of the Old South (the slave states prior to the American Civil War), historians in the mid-twentieth century debated whether or not the slave economy qualified as a capitalist society. The disagreement was on purely Marxist grounds, with the Marxist historians being those who rejected the arguments that the Old South was capitalistic because it was, according to Marx’s defined epochs, a feudalsociety (though some alterations to the stages doctrine and the analysis were offered as Marxist historians became less orthodox).

But while the stages doctrine of Marxist history might still survive in some literature, its analytical use has been increasingly rejected as well. This leaves the element of Marx’s class analysis, and it is the most persistent element of Marx’s theory of history that, despite its own alterations by non-orthodox Marxists, has survived in the more modern literature. From the various alterations of Marx’s class analysis, though, do we find the definition of “cultural Marxism.”

Probably the most important element in the specifically Marxist class analysis is Marx’s idea of “exploitation.” This concept is the primary distinguishing characteristic between the Marxist and Austrian class analysis, as Rothbard first observed and Hoppe elaborated on (Rothbard uses the distinction of “caste conflict” in Man, Economy, and State to highlight the distinction between Marxist exploitation, which falls apart under sound economic scrutiny, and the Libertarian theory of exploitation which is based on the hegemonic relationships between various people, compared to voluntary relationships).

In the field of history, the Marxist historian Eric Hobsbawm penned an essay entitled “Notes on Class Consciousness” that offered an orthodox interpretation of Marxist class theory. Class and class conflict, Hobsbawm argued, were present “whenever society was divided between exploiters and exploited,” and political organization was required to “channel such conflict into an emancipatory class consciousness.”1

But this isn’t cultural Marxism; it’s just Marxism. A less orthodox Marxist historian, E.P. Thompson, modified Marx’s class theory by emphasizing the cultural elements of the proletarian class. Instead of their consciousness being dictated by only economic forces, as Marx posited, they were also dictated by cultural and religious factors. In his influential book The Making of the English Working Class, Thompson accepted the Marxist ideas of class consciousness and the proletariat, but the reaction to industrialization was, in Thompson’s view, partly shaped by their inherited culture.

As Anna Green and Kathleen Troup point out, “It is this emphasis upon the role of ideas or popular morality that has led Thompson to be characterized as a ‘cultural’ Marxist.”2 In Thompson’s book, he wrote, “Class consciousness is the way in which these experiences are handled in cultural terms: embodied in traditions, value-systems, ideas and institutional forms.”3

Given the idea of cultural Marxism that has existed, non-pejoratively, among avowed Marxists, we can turn to Mises’s analysis on history that identify further what constitutes genuine cultural Marxism aside from merely the idea of “consciousness influenced by culture.”

Throughout history, Mises argues, philosophers were on a quest to discover an absolute standard of values. Writing in the 1950’s, Mises claimed that many thinkers argued that “justice” was the primary value to be pursued. Of course, this begs the eternal question of how justice can be defined and measured, but that complex debate is not important regarding the issue of cultural Marxism. Mises points out that in any society, disagreements exist over the best method of political or social organization. This, of course, need not necessarily refer to judgments of value.

However, he then describes what can only be called “social justice.” Mises writes:

Social institutions, [people] assert, must be just. It is base to judge them merely according to their fitness to attain definite ends, however desirable these ends may be from any other point of view. What matters first is justice. The extreme formulation of this idea is to be found in the famous phrase: fiat justitia, pereat mundus. Let justice be done, even if it destroys the world.4

Naturally, this fails to answer any question of what justice actually is, in the minds of any advocate of this maxim. But people calling for social justice often have no coherent definition of justice to identify; instead, they offer a grab-bag of platitudes, often in contradiction with each other (see, for example, the people who wish to combat racism by celebrating racially segregated graduation ceremonies , as a means of, somehow, upholding the incompatible platitudinous ideals of both racial diversity and racial inclusivity).

But it is possible to envision a people who rationally debate the best method of organizing society and engage in civil discourse over the definition of justice and social institutions. Mises points to the “extreme formulation” that the idea of social justice can lead to, but not everybody who advocates “social justice” is guilty of this extreme formulation. However, Mises’s offers another identifying characteristic:

The world view that was displaced by modern rationalism did not tolerate dissenting judgments of value. The mere fact of dissent was considered an insolent provocation, a mortal outrage to one’s own feelings . Protracted religious wars resulted (emphasis added).5

Here we have the notion of intolerance toward dissenting ideas and preferences that culminates in violence (not necessarily religious, as Mises is speaking about historical wars, but the modern implications are not difficult to extrapolate). Violent opposition to dissenting opinions is certainly something that we can observe in modern society, as university campuses are becoming increasingly aware through the violent protests against politically controversial speakers.

To tie Mises’s observations in with E.P. Thompson’s, then, we do have an interesting trend. It is certainly not necessarily the case that people who hold certain cultural values – more often attributed with the cultural left – are also anti-capitalist. There are, indeed, many pro-capitalist individuals who agree with leftist cultural values. It does, however, seem interesting that the anti-capitalist left (usually the younger generations; as Mark Thornton has pointed out, the socialist label is becoming increasingly acceptable) often appear to view their economic ideas as part-and-parcel of their cultural views. This quite clearly conforms to the idea of cultural Marxism attributed to E.P. Thompson’s class analysis.

Of further interest is the observation that the violent protests – being the clear indication of the people Mises refers to when he speaks of the “insolent provocation” of “mere dissent” – come from people who can be classified according to E.P. Thompson’s Marxism, and, given Marx’s own idea of class struggle (which he never denied would be violent), it should hardly be controversial to describe these people as “cultural Marxists.” Whether or not, then, the accurately applied label of “cultural Marxist” should be viewed as a pejorative, I believe, depends on whether or not one believes violent intolerance to anybody of another “consciousness” is ethically permissible.