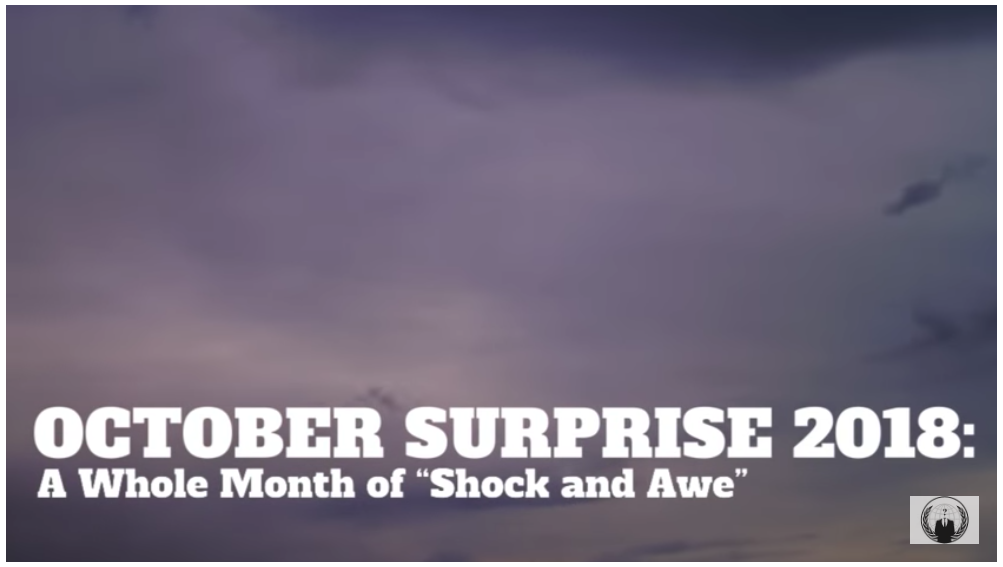 OCTOBER SURPRISE!  Anything goes until November 6th, especially this. “The stock market crash of 2008 was meticulously executed
to trigger an economic collapse timed just before Election Day
to ensure an Obama victory.  The perps knew that the electorate
would reject a Republican candidate after the damage done by
W. Bush.  Similarly, there’s a good chance that Deep State will
coordinate a massive market correction prior to November 6 as
a way to stick to Trump.  But especially to diminish any type of
a red tsunami.”

October is two thirds over and therefore ripe for the October Surprise of a lifetime.

The Deep State will do everything in its power to wreck Trump’s MAGA party, especially before the midterm elections. See: OCTOBER SURPRISE 2018: A Whole Month of “Shock and Awe”

The single best way the Democrat Deep Staters can rain on Trump’s parade is to sabotage the economic revival of America that started on January 20, 2017.

Because President Trump is fast approaching his 2-year mark, he has just enough time in the Oval Office whereby he must own it—particularly a major correction of the markets, that is.  This is how the Deep State is setting him up—slowly and stealthily.

Who else to be the henchman than the FED.

Just when Trump thought he had things churning along in the right direction, along comes the new FED Chairman with his rate-raising strategy. See: “That’s dangerous stuff.” — Description of Major Moves by the Federal Reserve

If there’s one man in the world who really has his finger on the button, it’s the FED Chairman.  For the Federal Reserve can, and does, more damage to the world economy in one day than any other entity on Earth.

Quite unfortunately for the POTUS, Fed Chairman Jerome Powell seems hellbent on being the skunk at Trump’s MAGA party.  While Powell’s official actions are few, they reveal a naked intention to paralyze the growth that Trump has encouraged since day one.

This ongoing train wreck is also not good news for economies tied to the Almighty Dollar, which is quickly losing its status as the world’s reserve currency. See: China & Japan Dump Treasuries As Dollar’s Reserve Status Slumps To 5 Year Lows

Regardless of whether President Trump is right about America always getting the short end of the stick regarding major trade deals, his remedies have been nothing short of disastrous.

Vacating arms treaties that took years to negotiate with nothing to replace them will also have catastrophic consequences.  Likewise, his unilateral approach to hammering out new trade deals will produce HUGE unintended consequences.  No other POTUS in American history has disrupted the international economic order in such a short period of time.

When national economies are adversely affected due to American exceptionalism, there will be blowback.  Canadians already started a “#BoycottUSProducts” movement back in July.  Not good at all when your next door neighbor does this.

It’s also not good when the USA levies an enormous and ever-increasing tariff regime on it’s biggest trading partner—China.   This audacious move alone is enough to collapse the economic order, as it is insidiously doing, as well as prep the world for a new world currency. Perhaps the very worst aspect of Trump’s foreign policy is his constant use of economic sanctions as a weapon against marketplace competitors.  These highly misguided initiatives will backfire in a BIG way thus leading the way to armed conflict (just as the globalists have designed it).

Because Treasury Secretary Steve Mnuchin is constantly issuing new economic sanctions whenever the U.S. can get away with such transparent financial terrorism and economic sabotage, the whole world is in now a VERY dangerous place.

Deliberately using the US dollar as a weapon has only encouraged the world community of nations to dump it, which they are now doing with a vengeance.  As follows:

China Will Hit the U.S. With a ‘Synchronized’ Retaliation for Trump’s New $200 Billion Round of Tariffs

As a direct result of Trump’s various detrimental international edicts, the BRICS alliance has essentially left the reservation—for good!  They will no longer kowtow to the once Almighty Dollar.  And they have aligned with each other around the existential necessity of removing the petrodollar as the world reserve currency.  In point of fact, Trump’s many ill-advised moves and maneuvers have greatly hastened the end of the reign of the Almighty Dollar. How, pray tell, do you trade with nations you seek to destroy?

The collapse of the American Empire is now inevitable.  After all, Washington’s primary weapon of war is now a worthless fiat currency without any backing whatsoever known as the Federal Reserve Note (a note is a debt, not an asset).

What the rest of the world now grimly understands is that they are dealing with a collapsing empire that in very rapid decline and therefore erratic.  And, that such a beast is extremely dangerous as the U.S. military machine is proving to be in theaters of war across the planet.  These various and sundry battlefields will provide the pretext for world war, unless something really major happens that short-circuits the Neocon push to war.

Surely history provides the proof that Europe always provides the primary staging ground for the global conflicts.  The reasons ought to be be self-evident by now, but perhaps they’re not.  As follows:

World War I and II were both driven on one level by the economic interests and financial gain sought by the Rothschild Crime Syndicate.  The central banks of the world secretly agreed to fully support those wars which is why TPTB put Switzerland — the international banking capital of the world at that time — completely off limits.

Post World War II, the European Union was cynically put into place as a means to preclude any further wars on the Continent.  That’s why it’s quite ironic that the European Union itself has contributed majorly to the current environment of internecine warfare among member states and constant sniping from Brussels.  The EU was supposed to unify Europe and has instead created an unparalleled political, economic and social conflagration of epic proportions.  See headlines below:

Because so much irreparable damage has already been done to Europe, there may be no way of fixing the exacerbating problems.  Clearly, this has evolved to a bitter war between the globalists and the nationalists, and neither side will compromise because doing so will mean the end of life as each side knows it.

In light of this thorny predicament for the London banksters and European predatory capitalists, warmongering against Russia has been amped up to unseen levels.  The Neocon Zionists are determined to pit Europe against Russia as a means of generating massive war profits, as well as to prevent Germany (and other Eurozone nations) from forming meaningful economic and/or political alliances with Russia.

KEY POINT: The single greatest threat to the hegemony of the Anglo-American Axis (See addendum below) is a substantive collaboration between Russia and Germany.  To prevent such an economic and financial powerhouse from ever developing, the Rothschild international banking cartel quite purposefully triggered the First and Second World Wars.  The same warmongering banksters are now attempting to start a Third World War. See: STRATFOR Chief Reveals Zio-Anglo-American Plot For World Domination

Russia Will Not Be Conquered

For the uninitiated, it’s critical to comprehend that those who rule the Anglo-American Axis want nothing less than a fully subjugated Russian Federation.  TPTB know that Putin’s Russia poses the single biggest obstacle to their planned One World Government.  It’s for this reason that Russophobia has been artificially manufactured to unprecedented levels by the power elite and their CIA-owned and operated Mockingbird Media. See: RUSSOPHOBIA: The Zio-Anglo-American Conspiracy to Conquer Russia Unravels in Real Time

However, there’s an old adage where it concerns Russia and China and their rocky relationship to the Anglo-American Axis.

“Where Russia goes in relation to the West, China will follow.”

The formation of the BRICS alliance is testament to this stark reality on the global geopolitical chessboard.  With China flexing its muscles more and more around the globe, other countries wanting to be free from the petrodollar reservation are sure to follow Beijing’s lead.  Likewise, other Western-oppressed nations are quietly following Russia’s defiant acts of independence from the Anglo-American Axis.

Not only that, but President Putin has been issuing one threat after another to any aggressor thinking about attacking the Russia’s Motherland.  His most recent proclamations portray a fierce and fearsome Russian bear that should not be played with or provoked, lest the attacker risk immediate extinction.

Putin Lays Down the Law at Valdai

The Powers That Be are in a real pickle.  Their plight is such that they are between a rock and a hard place with not a whit of wiggle room.

As a result of their extreme desperation, the New World Order globalist cabal is doing everything in their power to push the major military powers into the hot phase of World War III.  In fact, the entire planetary civilization has been experiencing the cold phase of WW3 since the 9/11 false flag terror attacks.

The globalist formula for creating their New World Order has been extraordinarily successful for well over a century; so why would they not execute the same “World War” game plan?

Humanity has been witnessing a dramatic uptick in the unfoldment of this globalist scheme for world domination.  The following analysis lays bare the indisputable facts about the intensifying circumstances pointing to yet another “Ordo ab chao” implementation plan:

The single best way to avert World War III is to expose the covert machinations being methodically carried out to trigger it.  Toward that end, folks everywhere can share vital information like this as well as support the worldwide peace movement however possible.

Truly, it has never been more important to pray for peace than now.  The forces of darkness are lining up as never before since they are cornered like never before.  Hence, the forces of Light are compelled to unify and overwhelm the warmongers with an ineluctable demand for peace, right here and right now.

While “THE END IS NEAR!“, it’s crucial to understand that We the People will ultimately determine just what kind of an end we get, yes?!