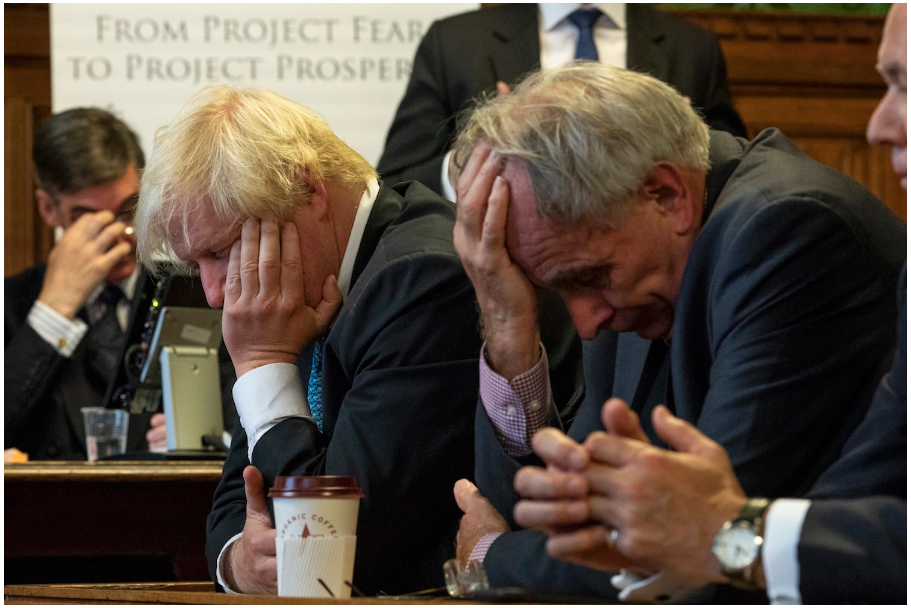 Conservative members of Parliament Jacob Rees-Mogg, Boris Johnson, and Peter Bone listen during the launch of “A World Trade Deal: The Complete Guide” at the Houses of Parliament on September 11, 2018 in London, England.

The magical wing of the Conservative Party believes that Britain can crash out of the European Union painlessly. It is leading the country into a recession.

A country should theoretically be able to leave the European Union without wrenching economic dislocation and without doing long-lasting damage to relations with its closest neighbors. And that might still happen. British Prime Minister Theresa May and the EU’s leaders could still negotiate a deal that limits the economic damage and preserves strong political ties.

But it’s increasingly possible that they won’t—largely because Britain continues to demand a privileged relationship with the EU that Brussels will not, and probably cannot, agree to. That leaves the country on a path toward a no-deal divorce, which could also cost the United Kingdom its unity in addition to its economic health.

At present, trade between Britain and the rest of the EU is seamless. There are no checks at borders or tariffs, and London-based firms can buy goods and components from suppliers based in Belgium as easily as they do from those in Birmingham. Seamless trade means that U.K. manufacturers are embedded in a web of pan-European, just-in-time supply chains.

For example, at Honda’s factory in Wiltshire, a short drive west from London, the firm holds just 36 hours’ worth of inventory. Some orders from EU suppliers arrive there in less than 24 hours. Similarly, Britain’s food industry relies on just-in-time deliveries from suppliers all over the continent; there is currently no need for refrigeration at ports because food does not need to be checked.

Everything coming into Britain would need to be checked at the border, but the country does not have the infrastructure to do this, let alone the facilities to store food safely while it is waiting to be checked. It will take years to either build such infrastructure at Dover or expand existing facilities at U.K. ports, which handle British trade with the rest of the world, all of which is subject to customs checks.

The port of Dover in Kent, the nearest point in Britain to the continent, handles around 2.6 million trucks a year. Even with the necessary infrastructure, checking all these trucks would create huge delays. Without it, there would be traffic gridlock, resulting in far-reaching disruption of trade and hence to production and food supplies—as well as delays for commuters and any brave British families still seeking to vacation in Europe.

Outside the EU’s legal framework, many U.K. products would no longer be accredited for sale across the EU. For example, British pharmaceuticals and chemicals firms would lose their right to sell their goods across the EU. They would likely renegotiate that right pretty quickly, but the disruption would be very costly.

The service sector would also be hit hard. For example, British-based financial firms would lose overnight their right to sell their services across the EU—their so-called passporting rights—creating legal uncertainty over contracts.

British-based financial firms would lose overnight their right to sell their services across the EU—their so-called passporting rights—creating legal uncertainty over contracts.

This would affect the clearing and settlement of financial trades, especially of derivatives (futures, options, and swaps), which are overwhelmingly centered in London. The Bank of England estimates that around £29 trillion (approximately $38 trillion) of derivatives contracts, including 90 percent of euro-denominated interest rate swaps, would be hit by a no-deal Brexit.

Faced with such economic turmoil, the British pound would fall steeply, probably taking the currency below parity against the euro and to 40-year lows against the U.S. dollar, immediately pushing up inflation and reducing living standards.

The Bank of England could then face a choice between raising interest rates to defend the value of the pound and head off a surge in inflation and keeping interest rates low in an attempt to shore up economic activity. It may opt for the latter, betting that the inflationary surge resulting from a weaker currency will prove short-lived. But it would at the very least face a difficult trade-off.

A hard Brexit could also lead to a crash in the property market, especially if the Bank of England is forced to raise interest rates sharply. If it avoids doing so and provides sufficient liquidity to the banks, housing prices would still no doubt fall as economic uncertainty deters domestic buyers and foreign buyers shun U.K. assets until the situation stabilizes.

and how quickly the economy would rebound. There are good reasons to believe that the rebound would be slow.The British government and the EU would agree on measures to allow the resumption of trade in things such as chemicals and pharmaceuticals, but the imposition of tariffs would be very costly. Honda estimates that tariffs would push up the cost of a U.K.-built car by 10 percent. And British exports would face EU tariffs.

Some British Euroskeptics have argued that the government could cut tariffs on EU imports to zero. But under Word Trade Organization rules, members must grant the same “most favored nation” access to all members, so if the U.K. scrapped tariffs on EU imports, it would have to scrap them on all imports; at the same time, its exports would still face tariffs. This would have far-reaching implications for the country’s trade competitiveness; no U.K. government will opt for “unilateral free trade.”

Moreover, there is no reason to believe Britain will be more successful at signing free trade agreements with non-EU countries than with the EU. In any case, Britain would need to sign agreements with most of the world to offset the impact of much diminished access to the EU market. And free trade deals would not cover services, which constitute approximately 45 percent of British exports, and would be hit hard by the loss of access to the EU market.

The biggest hit to British living standards would arguably come through the impact of no deal on investment. The United Kingdom would become a less attractive place to invest in traded goods, such as cars and other complex manufactured goods that require a lot of imported components.

The United Kingdom would become a less attractive place to invest in traded goods, such as cars and other complex manufactured goods that require a lot of imported components.

Lower wage costs—the result of a weaker pound—would not offset the increased costs of trade because labor costs now account for a low and falling share of total costs in high-end manufacturing. Weaker consumption, the result of higher inflation, would also hit investment. The result would be slower productivity growth and hence weaker growth in wages.A no-deal Brexit would also create huge uncertainty over the legal status of the 3 million EU citizens living in the United Kingdom. The end of free movement of labor would lead to a sharp fall in the number of people coming to work in Britain from EU counties, slowing economic growth.

Both right-wing and left-wing Brexiteers argue that quitting the EU could be liberating in the long term, though for contradictory reasons. The right-wingers argue it would free the U.K. economy from stifling anti-business EU rules and regulations, boosting Britain’s economic dynamism. But according to the Organization for Economic Cooperation and Development, Britain’s markets for goods, services, and labor are already among the least regulated in the developed world. Britain could scrap EU labor regulations mandating statutory holiday entitlements, but no British government would do this, and there is no evidence doing so would boost economic performance.

For the left-wingers, the EU is a neoliberal construction, run in the interests of capital and to the detriment of workers. In their view, it prevents British governments from pushing through policies to tame capital and redistribute income from rich to poor. This argument fails to acknowledge that Germany redistributes far more than Britain does and that France and Sweden have much bigger public sectors than the United Kingdom has.

The anti-EU left also believes that leaving the EU would lead to reindustrialization by allowing the U.K. government to subsidize local industries, such as shipbuilding and other manufacturing. But erecting barriers to imports does not mean manufacturing jobs come back. By disrupting supply chains and increasing the cost of producing in Britain, a no-deal Brexit threatens a further shrinkage of manufacturing.

They can also relatively easily replace British suppliers with those from other member states. However, some EU member states would suffer more than others.For example, the Irish economy is closely linked with Britain’s, and much of Ireland’s trade with the EU passes through Britain. Moreover, no deal would lead to the imposition of a hard border between Northern Ireland and Ireland, putting into doubt the survival of the Good Friday Agreement of 1998, which ended decades of violence between Irish nationalists and Unionists loyal to London.

One area of possible EU vulnerability is finance; London is by far the most important financial center in Europe. A hard Brexit would fragment the European capital market, cutting businesses in the EU off from sources of capital in London. The EU could grant temporary regulatory equivalence to London-based exchanges that are critical to financial stability, enabling eurozone banks to clear and settle derivatives contracts in London. But if the EU opts against doing so, financial stability would be at risk.

However, the EU would lose one of its largest member states in circumstances that would almost guarantee poor bilateral relations for the foreseeable future. It is unclear whether this would undermine Britain’s commitment to the defense of Europe, or for that matter the U.S. commitment to the defense of Europe, as the loss of the United Kingdom would remove the most pro-American voice in the EU.

Brexit without a deal also promises to disrupt the balance of power within the EU, further strengthening Germany’s dominance. While this would happen whether Britain leaves with no deal or with a negotiated settlement, at least in the latter case it would be possible to keep Britain involved in some aspects of EU operations—not least those pertaining to security and defense—which would be impossible under no deal.

Britain may still step back from the precipice. But if it does not, the country is in for a rude awakening. There will be no winners—except, perhaps, Russia.

Simon Tilford is chief economist at the Tony Blair Institute for Global Change, having previously worked at the Centre for European Reform. He has published widely on the political economy of the eurozone, the future of the EU and the economics of Brexit. @SimonTilford