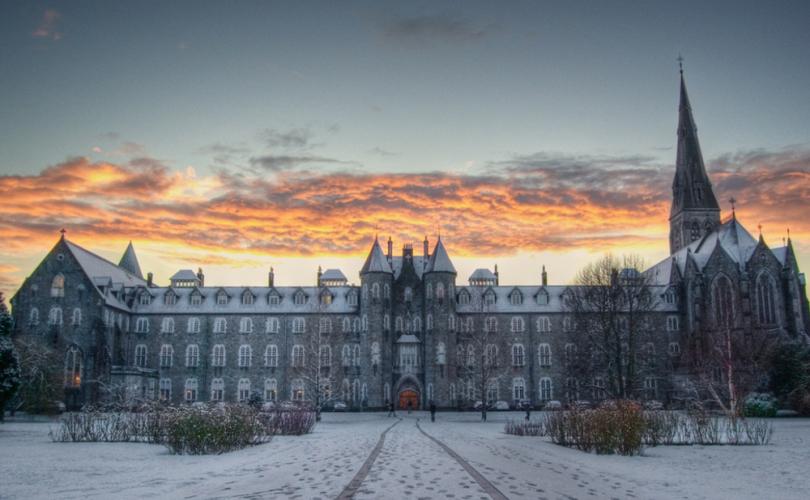 September 24, 2018 (Lumenfidei) – A priest and former seminary vocational growth counselor in Ireland has revealed for the first time the real reason he resigned from the country’s national seminary two years ago.

Father David Marsden told Lumen Fidei in an exclusive interview about the existence of a powerful “gay” subculture in St Patrick’s College in Maynooth, Ireland.

The trained psychologist, who specializes in priestly formation, said that a homosexual network exists among seminary council and spiritual directors. In the face of such widespread dissent from Church teaching on sexuality, it was no longer possible to conduct proper formation in the seminary, he said, and he felt compelled to resign.

Fr. Marsden relates in the interview how he became aware of the existence of the homosexual network and attempted, to no avail, to make it known to proper authorities.

The priest’s testimony suggests that an active and secretive homosexual subculture is being allowed to thrive in the Maynooth seminary, with the approval of the ecclesial authorities.

The year is 2015 and debate in Ireland is dominated by the State’s plan to change the constitution to allow same-sex couples to “marry.” With such a blatant assault on God’s plan for marriage one might expect the Church to be vocal in promoting the natural law, yet, despite the intensity of the pro-LGBT campaign, there was silence from much of the hierarchy. Priests and bishops did not speak. Were they afraid, unsure or compromised, we do not know. But the silence was deafening.

Even in the country’s heart of Catholic learning — the Pontifical University in Maynooth — there was silence…apart from one lone clerical voice supported by the small group of orthodox seminarians.

During a meeting of the seminary council and heads of faculty, months before the referendum, Fr. Marsden suggested that the seminary hold a Novena, or Holy Hour, or consider some other prayerful devotion so the seminarians and college staff could unite in prayer for a good outcome. He recounted how instead of support, his idea was dismissed…by the President. It was clear that the other priests did not want to do anything spiritual or temporal to defend the teaching of the Church. In fact, Fr. Marsden was left with the impression that many of the staff preferred to remain silent and not even mention the referendum, never mind speak out against it. The staff dining room became a place where the referendum was never mentioned, he said.

In the run-up to the same-sex “marriage” referendum, Fr. David Marsden delivered two homilies in the seminary in which he spoke out strongly in defense of marriage between a man and woman. He denounced from the pulpit the notion that people of the same sex could marry.

It was after the second homily, he said, that he was called into the President’s office and informed that a complaint had been made against him. The identity of the individual was not revealed to him. Fr. Marsden told Lumin Fidei that he strongly suspects it was a friend of a homosexual seminarian who made the complaint as the Mass was on a Sunday morning and therefore open to all the students from Maynooth University.

It was during this meeting that the President aired a concern that Fr. Marsden was becoming a ‘one issue person,’ the priest related. The implication was, he said, that the President was becoming anxious that the priest was speaking out too much about the referendum and homosexuality in general. Fr. Marsden said he responded by saying the only reason he could be called a ‘one issue person’ in the seminary was because he was the only person saying anything about the referendum or homosexuality. He told Lumin Fidei that this was likely because other staff members were either afraid to speak out or were homosexual themselves.

Despite the opposition from the staff, Fr. Marsden received much support and was admired by many of the seminarians, he recounted. But he was also aware of an active and vocal “gay” subculture operating freely in the seminary. When the referendum was passed in May 2015, the priest recounted how this group became emboldened to the point of having no fear in letting others know they were homosexual, sexually active, and in the seminary with the full knowledge and support of their bishops.

Against this backdrop, a group of faithful seminarians became concerned that the seminary not only seemed to take a liberal view of Catholic teaching, but also encouraged a “gay” subculture to develop within the seminary. Exasperated and at the point of desperation, one of the seminarians decided enough was enough and wrote an anonymous letter to the Bishops’ Conference pleading with the bishops to intervene. The letter named seven active homosexual seminarians.

It is understood that this letter was sent back from the bishops’ office to the President of the seminary Monsignor Hugh Connolly. But, rather than take action to investigate the claims in the letter, the seminary council began a witch hunt to discover the author. In the end, a completely innocent seminarian was accused, based on the fact that he had reported two seminarians – one of them his close friend – when he found them in bed together. No proof was given that he had written the letter. He was simply accused and thrown out of the seminary.

Fr. Marsden recounted how he challenged one of the most notorious homosexual seminarians about his disordered lifestyle. He was given the response: “My bishop knows, the seminary council knows, my spiritual director knows – none of them have a problem with it so neither should you.” The priest said he realized that he was being told to essentially shut up since this was none of his business. It was after this encounter that Fr. Marsden said he realized that it was now no longer possible to conduct proper formation in the seminary in the face of such widespread dissent from Church teaching that was blatant among the seminary council and the spiritual directors. It was at this point, he said, that he wrote a letter to Mons. Connolly tendering his resignation.

When Fr. Marsden tried to raise the problems he was seeing in the seminary with the Church authorities, the response he received was to not only ignore his concerns, but, to ridicule him for raising them in the first place. He recounted how one high-ranking cleric stated that “you see gays under the bed.”

In the end, Fr. Marsden said he could no longer work in the seminary and retain his integrity. He chose to resign from what he describes as an “institution riddled by systemic disobedience to Church teaching.”

It was reported in the secular press during the summer of 2016 that the reason for his resignation was a conflict of theological outlook. But, the priest said, this reason was incorrect. There certainly was a divergence of theological opinion. In fact, many of Fr. Marsden’s friends related to him their amazement at how long he managed to stay in the seminary. But, it was the issue of homosexuality within the seminary which brought matters to a head.

The seminary has long been a “cesspool of liberal theology and heterodoxy,” Fr. Marsden said. Because of this, those few staff members who, down through the years, maintained a fidelity to the Magisterium were often isolated and subtly persecuted, he added.

Fr. Marsden described the model of formation in the Maynooth seminary as a “dictatorship of blandness,” by which he means that any sort of vibrant or orthodox expressions of the Faith on the part of seminarians were harshly dealt with and suppressed. Seminary staff resented students who used the internet for alternative, i.e. orthodox, sources of information about the faith. In fact, the term for such alternative sources that was bandied about on a regular basis during staff meetings was “shadow formation.”

“The tripe they were getting served up by the theology faculty was in most cases utter drivel,” Fr. Marsden explained.

“It is my honest assessment that the formation and academic staff in Maynooth are either liberal or homosexual and a significant number are both,” he added.

Fr. Marsden also revealed that there may have been an Irish version of seminarian and priest abuser now-ex Cardinal McCarrick. Fr. Ronan Drury, a priest of Meath diocese, lived in the seminary until his death last year. Reading his obituaries and the praise heaped on him by bishops and the current President of the Seminary, Father Michael Mullaney, one might picture Drury as a learned and jovial priest, popular with all in the seminary which was his home for 42 years. He was Professor of Homiletics there since 1977 until his death last year. He was also editor of the liberal Furrow magazine for 40 years.

However, Fr. Marsden said he discovered a dark and secretive side to Drury. Known by his nickname “Kitty,” he was a notorious figure among the “gay” subculture in St Patrick’s College. His behavior was such an open secret among the students that even the normally cautious Mons. Connolly felt it necessary to inform Fr. Marsden that a credible allegation of molestation had been made against Drury by an individual. The complaint was regarding inappropriate touching by Drury of this person. Later, a priest also confided to Fr. Marsden that Drury had molested him as a first year seminarian. Monsignor Connolly never suspended Drury.

Fr. Marsden’s testimony suggests that a place like Maynooth seminary is a playground for the likes of Drury. He had daily one-to-one access to young male students. Many questions remain. Who knew about his abuse? Was his bishop informed?  If Mons. Connolly was concerned about his behaviour, what did he do to protect seminarians? Why was Fr. Drury allowed to continue living in the seminary with open access to vulnerable young men?

Fr. Marsden’s testimony also suggests that an active and secretive homosexual subculture is being allowed to thrive in the Maynooth seminary, with the approval of the ecclesial authorities – some of whom Fr. Marsden suspects are also same-sex attracted themselves.

Lumen Fidei reached out to various bishop trustees of the college for comment on Fr. Marsden’s testimony prior to publication, but no response was given. The current President of Maynooth seminary was also contacted, but he refused to answer any questions about Drury’s behaviour.

It would appear that the circle of secrecy is protecting its own.

But the faithful will not accept cowardice or silence. An open and transparent investigation into the various scandals which have afflicted Maynooth seminary for at least 30 years must take place. Questions that need to be address include: Were payments made to silence victims, and who were the key figures behind the culture of cover up and secrecy?

The only sure way to end the disease in Maynooth seminary is to send the remaining small number of faithful seminarians to the Irish College in Rome and to close the seminary for a year or more until such an investigation is carried out and the recommendations from it are fully implemented. If this cannot be accomplished, then the seminary should simply close. Fr. Marsden’s testimony suggests that Maynooth seminary is no longer fit for its purpose of forming Catholic men to be future priests. Parents should do all in their power to dissuade their sons from going there.

The long suffering faithful and those seminarians who have been abused and persecuted deserve action and transparency. This is a defining moment for the Church in Ireland. Faithful Catholics should not rest until every bishop stands up and takes direct action to purge the filth from the Church.

Note: The Catholic Voice encourages any of Drury’s victims to come forward with the possibility of speaking in confidence about any abuse they experienced during their time in the seminary. Please email: info@catholicvoice.ie. You will be listened to in the strictest confidence.

Editor’s note: This article first appeared at LumenFidei.ie. It has been edited and published here by permission of the author.