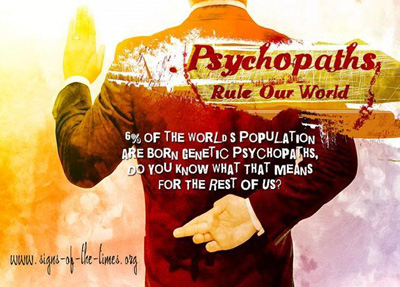 “Our society is run by insane people for insane objectives. I think we’re being run by maniacs for maniacal ends and I think I’m liable to be put away as insane for expressing that. That’s what’s insane about it.”

When Gandhi was asked his opinion of Western civilization he said it would be a good idea. But that oft-cited quote, is misleading, assuming as it does that civilization is an unmitigated blessing. Civilized people, we are told, live peacefully and cooperatively with their fellows, sharing the necessary labour in order to obtain the leisure to develop arts and sciences. And while that would be a good idea, it is not a good description of what has been going on in the so-called advanced cultures during the past 8,000 years.

Civilization, as we know it, is largely the creation of psychopaths. All civilizations, our own included, have been based on slavery and “warfare.” Incidentally, the latter term is a euphemism for mass murder.

The prevailing recipe for civilization is simple:

Psychopaths have played a disproportionate role in the development of civilization, because they are hard-wired to lie, kill, injure, and generally inflict great suffering on other humans without feeling any remorse. The inventor of civilization – the first tribal chieftain who successfully brainwashed an army of controlled mass murderers—was almost certainly a genetic psychopath.

Since that momentous discovery, psychopaths have enjoyed a significant advantage over non-psychopaths in the struggle for power in civilizational hierarchies – especially military hierarchies.

Military institutions are tailor-made for psychopathic killers. The 5% or so of human males who feel no remorse about killing their fellow human beings make the best soldiers. And the 95% who are extremely reluctant to kill make terrible soldiers – unless they are brainwashed with highly sophisticated modern techniques that turn them (temporarily it is hoped) into functional psychopaths.

In On Killing, Lt. Col. Dave Grossman has re-written military history, to highlight what other histories hide: The fact that military science is less about strategy and technology, than about overcoming the instinctive human reluctance to kill members of our own species.

The true “Revolution in Military Affairs” was not Donald Rumsfeld’s move to high-tech in 2001, but Brigadier Gen. S.L.A. Marshall’s discovery in the 1940s that only 15-20% of World War II soldiers along the line of fire would use their weapons:

“Those (80-85%) who did not fire did not run or hide (in many cases they were willing to risk great danger to rescue comrades, get ammunition, or run messages), but they simply would not fire their weapons at the enemy, even when faced with repeated waves of banzai charges”

Marshall’s discovery and subsequent research, proved that in all previous wars, a tiny minority of soldiers – the 5% who are natural-born psychopaths, and perhaps a few temporarily-insane imitators—did almost all the killing.

Normal men just went through the motions and, if at all possible, refused to take the life of an enemy soldier, even if that meant giving up their own. The implication: Wars are ritualized mass murders by psychopaths of non-psychopaths. (This cannot be good for humanity’s genetic endowment!)

Marshall’s work, brought a Copernican revolution to military science. In the past, everyone believed that the soldier willing to kill for his country was the (heroic) norm, while one who refused to fight was a (cowardly) aberration. The truth, as it turned out, was that the normative soldier hailed from the psychopathic five percent. The sane majority, would rather die than fight.

The implication, too frightening for even the likes of Marshall and Grossman to fully digest, was that the norms for soldiers’ behavior in battle had been set by psychopaths. That meant that psychopaths were in control of the military as an institution.

Worse, it meant that psychopaths were in control of society’s perception of military affairs. Evidently, psychopaths exercised an enormous amount of power in seemingly sane, normal society.

How could that be?

In Political Ponerology, Andrzej Lobaczewski explains that clinical psychopaths enjoy advantages even in non-violent competitions to climb the ranks of social hierarchies. Because they can lie without remorse (and without the telltale physiological stress that is measured by lie detector tests) psychopaths can always say whatever is necessary to get what they want.

In court, for example, psychopaths can tell extreme bald-faced lies in a plausible manner, while their sane opponents are handicapped by an emotional predisposition to remain within hailing distance of the truth. Too often, the judge or jury imagines that the truth must be somewhere in the middle, and then issues decisions that benefit the psychopath. As with judges and juries, so too with those charged with decisions concerning who to promote and who not to promote in corporate, military and governmental hierarchies.

The result is that all hierarchies inevitably become top-heavy with psychopaths.

So-called conspiracy theorists, some of whom deserve the pejorative connotation of that much-abused term, often imagine that secret societies of Jews, Jesuits, bankers, communists, Bilderbergers,Muslim extremists, papists, and so on, are secretly: The only conspiracy that matters is the conspiracy of the psychopaths against the rest of us.

Behind the apparent insanity of contemporary history, is the actual insanity of psychopaths fighting to preserve their disproportionate power. And as that power grows ever-more-threatened, the psychopaths grow ever-more-desperate.

We are witnessing the apotheosis of the overworld—the criminal syndicate or overlapping set of syndicates that lurks above ordinary society and law just as the underworld lurks below it.

In short, the whole sick crew of certifiable psychopaths running our so-called civilization.

And they are running scared. It was their terror of losing control that they projected onto the rest of us by blowing up the Twin Towers and inciting temporary psychopathic terror-rage in the American public.

Why does the pathocracy fear it is losing control?

Because it is threatened by the spread of knowledge. The greatest fear of any psychopath is of being found out.

“If the people knew what we had done, they would chase us down the street and lynch us.”

Given that Bush is reported to have participated in parties where child prostitutes were sodomized and otherwise abused, among his many other crimes, his statement to McClendon should be taken seriously.

Psychopaths go through life knowing that they are completely different from other people. They quickly learn to hide their lack of empathy, while carefully studying others’ emotions so as to mimic normalcy while cold-bloodedly manipulating the normals.

Today, thanks to new information technologies, we are on the brink of unmasking the psychopaths and building a civilization of, by and for the normal human being – a civilization without war, a civilization based on truth, a civilization in which the saintly few rather than the diabolical few would gravitate to positions of power.

We already have the knowledge necessary to diagnose psychopathic personalities and keep them out of power. We have the knowledge necessary to dismantle the institutions in which psychopaths especially flourish – militaries, intelligence agencies, large corporations, and secret societies. We simply need to disseminate this knowledge, and the will to use it, as widely as possible.

Above all, we need to inform the public about how psychopaths co-opt and corrupt normal human beings. One way they do this, is by manipulating shame and denial – emotions foreign to psychopaths but common and easily-induced among normals.

By forcing the neophyte to engage in ritualized behavior that would be horrendously shameful in normal society, the psychopaths’ guild destroys the candidate’s normal personality, assuming he had one in the first place, and turns the individual into a co-opted, corrupt, degraded shadow of his former self – a manufactured psychopath or psychopath’s apprentice.

Likewise, many Americans have long refused to see that hawkish elements of the overworld, operating through the CIA, had obviously been the murderers of JFK, MLK, RFK, JFK Jr., Malcolm X, Ché, Allende, Wellstone, Lumumba, Aguilera, Diem, and countless other relatively non-psychopathic leaders. They refuse to see the continuing murders of millions of people around the world in what amounts to an American holocaust.

They refuse to see the evidence that the psychopaths’ guilds running America’s most powerful institutions use the most horrific forms of sexualized abuse imaginable to induce multiple-personality-disorder in child victims, then use the resulting mind-control slaves as disposable drug-runners, prostitutes, Manchurian candidates, and even diplomatic envoys.

And of course they refuse to see that 9/11 was a transparently obvious inside job, and that their own psychopath-dominated military-intelligence apparatus is behind almost every major terrorist outrage of recent decades.

All of this psychopathic behavior at the top of the social hierarchy is simply too shameful for ordinary people to see, so they avert their gaze, just as wives of husbands who are sexually abusing their children sometimes refuse to see what is happening in plain view. If deep, deep denial were a river in Egypt, American citizens’ willful blindness would be more like the Marianas Trench.

But thanks to the power of the Internet, people everywhere are waking up. The only obvious non-psychopath among Republican presidential candidates, Ron Paul, also happens to be the only candidate in either party with significant grassroots support.

If “love” is embedded in the Revolution Ron Paul heralds, that is because Dr. Paul – a kindly, soft-spoken physician who has delivered more than 4,000 babies – implicitly recognizes that government is the invention and tool of psychopaths, and therefore must be strictly limited in scope and subjected to a rigorous system of checks and balances, lest the psychopath’s tools, fear and hatred, replace love as the glue that binds society together.

The decline in militarism since World War II in advanced countries, the spread of literacy and communications technology, and the people’s growing demands for a better life, together represent a gathering force that terrifies the pathocracy, (those alternately competing-then-cooperating gangs of psychopaths who have ruled through lies, fear and intimidation since the dawn of so-called civilization).

Since nuclear weapons have made war obsolete, the pathocracy is terrified that its favorite social control mechanism – ritualized mass slaughter – is increasingly unavailable. And if war was the great human tragedy, the pathocrats’ pathetic attempt at a war-substitute – the transparently phoney “war on terror” – is repeating it as sheerest farce.

Truly, we are witnessing the twilight of the psychopaths.

Whether in their death throes they succeed in pulling down the curtain of eternal night on all of us, or whether we resist them and survive to see the dawn of a civilization worthy of the name, is the great decision in which all of us others, however humbly, are now participating.