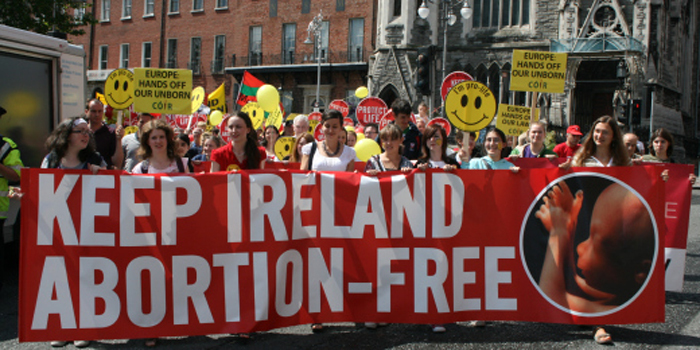 In any other country on planet earth, a gaping chasm of 22 percent between opinion polls and official results would be laughed off the stage.

Last week’s Irish abortion referendum was rigged. The official result was – get this –  a preposterous 22 points – yes 22 points! – out of step with the final opinion poll of the campaign (I). And that was no rogue poll – other surveys put the anti-abortion side even higher.

Canvassers in towns and villages across Ireland reported huge support for the pro-life cause on doorsteps – sometimes at rates of 100 percent (2), yet the official result recorded a majority for the abortion cause in almost every constituency, and the pro-aborts won the national vote by two to one.

Pro-life rallies in the run-up to the referendum numbered over a hundred thousand, whereas their pro-abortion counterparts mustered derisory turnouts of two or three thousand hardcore lefties and embittered cat ladies.

There was no organized opposition to the 2015 Irish SSM vote, and none of the major pro-life groups got involved in opposing it on the ground – unlike the abortion referendum. Yet bizarrely, the pro-abortion cause easily out-performed the vote for gay ‘marriage’ in last week’s referendum.

In keeping with the Big Rig strategy – a subspecies of the Big Lie – the Deep State rigged the abortion vote referendum on a massive scale; the theory being that, as with the  Big Lie, the bigger the rig the more it stupefies the target into dazed submission – Shock and Awe administered in the psycho-political realm.

Bear in mind that the Irish vote had implications, not just for Ireland, but for Northen Ireland, the United States, Poland, Spain, Hungary, and other countries where abortion is still a burning issue. So, for both domestic and international reasons, the Deep State needed the defeat to be huge and psychologically crushing. Is anyone naive enough to believe they wouldn’t rig under such exigent conditions? Seriously?

In Ireland, remember, there are no alternative media and almost no independent journalists of any kind.  No one here is watching the Rothschild crooks of the government and the Alinskyite far left, so they can get away with just about anything. Crucially Ireland also has proportionally one of the largest and most powerful Masonic networks in the world – networks that almost no one – not even the strongest Catholics – seem to be aware of. Indeed the silence in Ireland surrounding Freemasonry is a not so paradoxical testament to its huge power and success. A secret society that is talked about, is after all, by definition, not so secret.

In 2008, the then Prime Minister of Ireland, Brian Cowen called the current Irish Prime Minister, Leo Varadkar (an openly homosexual Neocon) and his party colleagues ‘Freemason F..ers”. Within a few months, Cowen and his government were hit by a huge bankster induced financial crisis which brought the country to its knees and destroyed Cowen’s political career. The “Freemason F…ers” have held the tiller on behalf of Rothschild globalism ever since.

As for Ireland’s pro-abortion left, it is dominated by criminals and terrorists. The Workers Party, a criminal terrorist Stalinist gang with strong links to British intelligence, took a leading part in the campaign, as did Ireland’s mainstream left-wing party, Labour – itself dominated by ex-Workers Party stalwarts.

Pro-abortion Sinn Fein is another criminal enterprise controlled by British intelligence – as are the thuggish Trotskyist parties such as Solidarity (aka the Militant Tendency). Who in their right mind would expect any of these guys to play by the rules of democracy?

NO OPPOSITION TO GLOBALISM

The organized opposition to Rothschild globalism in Ireland does not exist – only a single issue anti-abortion movement, which cringes, Stockholm syndrome style, in the face of its Zio-leftist persecutors.

Thus, true to form, the pro-life leadership are ignoring the irrefutable evidence of huge fraud in the referendum, opting instead for their usual weedy, fatalistic response to pre-ordained “defeats”- their self-absorbed reasoning being that it’s better to be rigged into oblivion than to be seen as a bad loser – or worse still, a “conspiracy theorist”.

Some of the Irish pro-life leaders are genuine if tragically lacking in hardnosed street smarts, but some are Neocon gatekeepers, whose real job is to make sure no effective opposition to occult cultural Marxism emerges in Ireland. No one should be surprised therefore that these shills acquiesce in fake referendum “results”; the real mystery is why genuine pro-lifers play along.

They must know in their hearts – from their own experience canvassing – that the results are a sham, but they remain silent. Why?

To call modern Ireland a banana republic is a gross insult – to banana republics. The electoral system is rife with liberal (in both senses of the term) fraud. A University of Cork study found that 600,000 extra voting cards had been issued in the 2007 Irish general election, 488,000 in the 2016 election (3). On a good day that’s enough fake votes to swing the Presidential election in America, never mind referendums in a small country like Ireland.

When queried about this huge scandal at the heart of the democratic system, an Irish government spokesman bleated that one in four voters were asked for ID at voting centers (ibid).

Codswallop of course – I know of no one who was ever asked for ID when going to vote – but even if it were true, what about the other 75 percent who don’t get asked?

Needless to say, the media have consistently ignored the issue of hundreds of thousands of voting cards that belong to no one alive, and that can, therefore, be used by anyone. 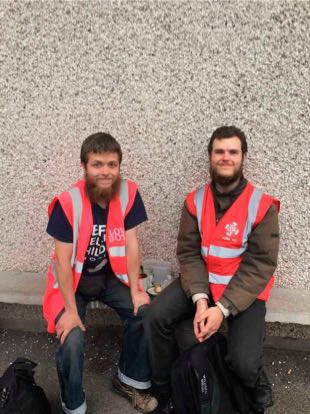 Tellingly, after the official outcome of the referendum was announced, it was left to two American ex-pats to state the glaringly obvious: Patrick Lauser and his brother Josiah, who both live in Cork, said plainly that the referendum was rigged, and cited as proof the fact that pro-lifers were blatantly and arbitrarily removed from the voting register, while foreigners with no right to vote were given voting cards “out of the blue” – something the brothers themselves witnessed. (4). Many others witnessed similar shenanigans.

Alone among modern nations, Ireland consistently refuses to count votes until the day after voting has ended. Given the neurotic fixation the Irish state class has with presenting a modern high tech image to the world, this is a dead giveaway that Irish voting is systemically rigged. On the only occasions when the eyes of the world are on Ireland, its ostensible rulers choose to portray their nation as a tribe of lazy slobs, too soft and shiftless to work through one night of the year counting votes.

Of course, the real reason for this apparent malingering is that during the hours between voting and official “counting”, the cabalist creatures of the night come out to play at the count centers. A video from the Irish Lisbon EU Treaty referendum of 2009 shows a guy casually LEAVING – not entering – a vote center in Cork, with a ballot box under his arm (5). No police, security or supervision of any kind, is visible in the large municipal hall. Anyone could, and probably did, do anything they liked with ballot boxes that night.

Video footage also exists from the same 2009 referendum showing ballot boxes being delivered to count centers without any police presence (see the article ‘Was the Irish Lisbon referendum rigged?; Digital Spy, 5 October 2009). This is illegal under Irish law and amounts to a blank cheque to government and globalist (for want of a better catch-all term) riggers to do exactly as they please with ballot boxes, once voting has stopped. During the interim between voting and counting, the real boxes are obviously switched wholesale and replaced with pre-stuffed boxes reflecting the wishes of the only voters that matter. God knows, 11 hours is ample time to perpetrate such planned fraud – especially if the coordinates have been worked out months, if not years, in advance.

When I observed as much to a friend after the Lisbon referendum, he replied: “stuff like that would get out”. But it did “get out” – albeit on a fraction of the scale at which it occurs. If a guy making off from a count center with a ballot box in his hand isn’t evidence of a dodgy voting system, what exactly is?

It “got out” alright; but the media and the police just ignored it, just as they ignored thousands of votes being “misallocated” i.e., stolen, in various elections (see Youtube video: ‘Vote manipulation in the run-up to the Lisbon referendum’).

Throw in hundreds of thousands of extra voting cards, and election officials and presstitutes in the pay of the Cabal, and you have all the ingredients you need for an endless election victory procession for the powers that be.

Not that one could rely on the Irish police, even if they were on the scene. In blatant contravention of the Irish constitution, which – as in most modern states – stipulates that the police must stay out of politics, the representative association for senior Irish police officers publicly declared its support for the Irish gay marriage referendum proposal in 2015.

Given this embrace of the most radical elements of the cultural Marxist agenda on the part of the notoriously corrupt Irish cops, how can anyone seriously expect them to uphold the law against voter fraud? The phrase ‘putting foxes in charge of the henhouse’ doesn’t begin to describe it.

Because of the culpable naivety and intellectual sloth of most Irish Catholics and social conservatives, the cabalists, and their leftist and Neocon catspaws reckon they can get away with fraud on a blatant scale that would get them chased out of town with pitchforks anywhere else.

Who’s to say they’re wrong? In 2O11, the pro-abortion radical leftist, Michael D Higgins “won” a landslide in the Irish presidential election, even though he had trailed by a whopping 19 points in opinion polls carried out one day before voting. What’s more, the now-defunct Teletext service of the Irish state broadcaster, RTE, mysteriously announced this astonishing result while voting was still going on.

To the best of my knowledge, no one questioned this obviously fake election – an “event” that even Nicolae Ceausescu would have blushed to stage.

In truth, rigged elections and referendums are akin to a form of cabalistic black magic targetted directly at the masses. No other event can change the collective psyche of a nation so profoundly and so rapidly; not royal weddings, not coronations, not rock concerts, not blockbuster movies, not even false flag terror attacks. As long as almost everyone believes the result of the Irish referendum, it alters not just the political reality of Ireland, but the psychic reality too: how the Irish view themselves, and how other nations view them. In short, it becomes a self-fulfilling crime of mass psychological deception.

Are we really dumb enough to believe that any deep state conspirators worth their salt would leave a psycho-cultural weapon of such magnitude in the hands of ordinary voters?