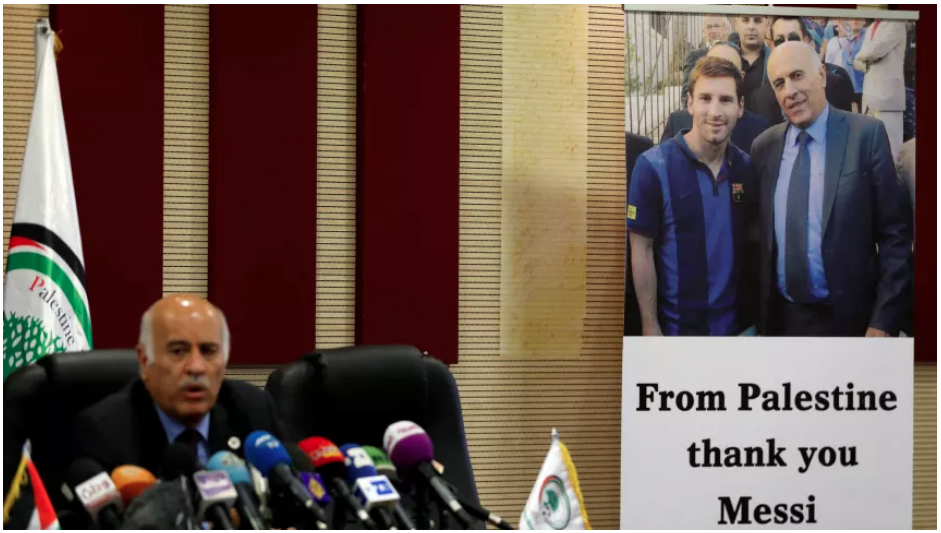 Argentina called off an exhibition match against the Israeli national soccer team that was slated for Saturday in Jerusalem, after being pressured by  Palestinan groups to call off the game.

Early Wednesday, the Israeli Embassy in Argentina confirmed that the game had been canceled, citing unspecified “threats and provocations” against star player Lionel Messi.

“This is a decision that, given the current context, the Palestine Football Association utterly rejects and condemns,” Rajoub wrote, adding that Israel was trying to use the match to help celebrate its 70th birthday.

Prime Minister Benjamin Netanyahu spoke with Argentine President Mauricio Macri late Tuesday, at Regev’s request, in an attempt to prevent the cancellation. But in a follow-up conversation, Macri told Netanyahu that he could not influence the final decision, sources close to the prime minister said.

A poster in the West Bank city of Hebron urging Messi not to participate in the Argentina-Israel World Cup warm-up match.HAZEM BADER/AFP

The Argentine daily Clarín reported that, according to official sources, Macri examined the issue with the Argentine Football Association and learned that “the players don’t want to play in Israel because of threats against Messi.” Macri apologized to Netanyahu and said the players’ motives were not political, the paper said.

Clarín also said Macri had planned to attend the game himself along with   businesspeople from the Argentine Jewish community.

Argentine player Gonzalo Higuaín told ESPN that “they’ve finally done the right thing. Rationale and health come before everything else. We think it’s best not go to Israel.”

On Sunday, Rajoub urged fans to burn pictures of striker Messi and replicas of his shirt if he played in the match.

Palestinians were not happy that the match would have been held in Jerusalem, and last week Rajoub wrote to Claudio Tapia, the head of the Argentine Football Association, accusing Israel of using the match as a “political tool.”

Pressure on Messi and the football association in recent days has included demonstrations in Buenos Aires, and in Barcelona in front of the national team’s training camp.

Defense Minister Avigdor Lieberman wrote on Twitter: “It’s too bad the soccer knights of Argentina didn’t withstand the pressure of the Israeli-hating inciters, whose only goal is to impinge on our basic right to self-defense and bring about Israel’s destruction. We will not yield to a pack of anti-Semitic terrorist supporters.”

“What happened here, truthfully, is less about the boycott. There’s a good friendship with Argentina, terrific relations. Due to violent incitement and threats by Jibril Rajoub and the whole bloodied-jerseys charade, fears rose about personal safety, and the players started to worry about being physically assaulted in Jerusalem,” Erdan told Israel Radio.

“Unfortunately, before they inquired in depth, they preferred to let the whole thing go. This is a submission to violence and terror that the Palestinians are trying to use, but let’s look at the big picture and not lose perspective.”

Deputy Defense Minister Eli Ben-Dahan said “terrorism must be fought against,” calling on Netanyahu to cancel Rajoub’s entry permit into Israel. “Rajoub is a despicable enemy,” he said, “[Israel] must declare him and the entire Palestinian Authority enemies.”

MK Itzik Shmuli (Zionist Union) said: “Instead of soccer, Miri Regev wanted politics and she got politics, and those who will pay the price are the fans who so looked forward to this historic game. It’s a great farce that gives immense momentum to the BDS campaign against Israel. Despite everything, we still implore Argentina’s players: This is a mistake. Come for the soccer, let go of the politics.”

Ayman Odeh, the head of the Joint List of Arab parties, said in a statement: saying “Netanyahu’s government may be gaining Trump, but it’s losing the world. You can’t just keep enjoying games while the rights of millions of Palestinians are being trampled. There’s only one way to win – ending the occupation and a real peace treaty. It’s still possible.”

MK Haneen Zoabi (Joint List) hailed the Argentines’ decision, saying that “holding the match while soldiers butcher the citizens of Gaza is unseemly and may be seen as allowing it.”

MK Yousef Jabareen (Joint List) also praised the decision. “The right-wing government has to realize that it cannot crudely trample UN resolutions and the rules of the international court and expect the world to ignore it,” he said, referring to the International Criminal Court in The Hague.

The Argentine national team did not want to play in Israel in the first place but preferred to prepare for the World Cup in Barcelona. The World Cup opens on June 14 in Russia.

Argentina coach Jorge Sampaoli said the chances of the Israel team going to Barcelona were small, and Argentina was already seeking another training rival.

Teddy Stadium, which was supposed to host the match, is in West Jerusalem. The match was originally slated to be played in Haifa but Israeli authorities contributed funding for it to be moved to Jerusalem, irking Palestinians further following U.S. President Donald Trump’s recognition of the city as Israel’s capital. The U.S. Embassy was moved there last month.

On Sunday, Rajoub declared a campaign against Argentina and particularly Messi, noting that he has millions of fans across the Arab and Islamic world.

“He’s a big symbol so we are going to target him personally, and we call on all to burn his picture and his shirt and to abandon him. We still hope that Messi will not come,” he told reporters after leaving the Argentine representative office in the West Bank town of Ramallah.

A small group of youths wearing Palestine soccer scarves demonstrated outside the representation office and tried to set fire to an Argentine flag.

Rajoub has long tried to get FIFA and the International Olympic Committee to impose sanctions against Israel. This is mainly because of the Israeli government’s settlements policy in the West Bank and because it has imposed travel restrictions on Palestinian athletes citing security concerns. Those bodies have not heeded his calls.

Argentina has made four previous pre-World Cup stopovers in Israel since 1986. The team has been drawn in World Cup Group D and will open its campaign against Iceland in Moscow on June 16.

Most countries do not recognize either Israel’s or the Palestinians’ sovereignty in Jerusalem and have embassies to Israel in the Tel Aviv area. However, Guatemala and Honduras followed the U.S. lead in moving their embassies last month.