Why is the US Ambassador to the UN an Israeli agent? 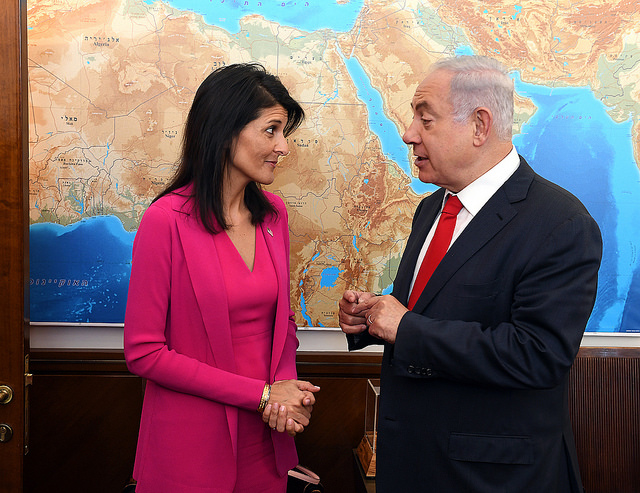 Why is the US Ambassador to the UN an Israeli agent?

The most recent claim that Russian President Vladimir Putin is “running” Donald Trump as if the U.S. president is a Russian intelligence asset comes from former Director of National Intelligence (DNI) James Clapper. “[Putin] knows how to handle an asset, and that’s what he’s doing with the president,” Clapper told CNN last Monday.

Clapper, who served as DNI under President Barack Obama, and who has repeatedly disparaged Trump both before and since the 2016 election, called the Russian president a “great case officer,” which might be the only nice thing said about Putin by a former senior U.S. official in quite some time.

Clapper was asked by CNN’s Jim Sciutto, “You’re saying that Russia is handling President Trump as an asset?” He responded “That seems to be… that’s the appearance to me.” Later in the conversation, Clapper backtracked slightly, clarifying his remarks by adding “I’m saying this figuratively.”

It was not the first time that a former senior intelligence official rendered a judgment that Trump is an intelligence asset being exploited by the Russians. Back during the campaign, former Acting Director of the CIA Michael Morell wrote an op-ed for the New York Times entitled “I Ran the CIA: Now I’m Endorsing Hillary Clinton.”

Morell reasoned that Putin, a wily ex-career intelligence officer, is “trained to identify vulnerabilities in an individual and to exploit them… In the intelligence business, we would say that Mr. Putin had recruited Mr. Trump as an unwitting agent of the Russian Federation.” Morell went on to explain that he based his critique on his assessment that “Mr. Trump has…taken policy positions consistent with Russian, not American, interests…”

Having actually been a Case Officer, unlike “experts” in tradecraft Clapper and Morell, I am not sure what figuratively or unwitting really mean. But I will accept the Morell definition that acting for a foreign power fits the definition of an “agent of influence.” Based on that, I do think that there are some individuals in the Trump administration who are more-or-less being directed by a foreign government and its intelligence service and that government would be Israel.

I would like to know more, for example, about the ties that the President’s son-in-law and family have to Israel and to its leadership. The Kushners are reported to be extremely close to Israeli Prime Minister Benjamin Netanyahu, and, if media reports are correct, they have engaged in the financial support of Israeli settlements on the West Bank, which the United States as well as the rest of the world consider to be illegal. And then there is America’s ambassador to Israel, David Friedman, who is known to be a supporter of the settlers and Jason Greenblatt, the designated regional “negotiator.” What exactly is their relationship to Israel? Do any of them have dual nationality? Shouldn’t U.S. taxpayers who pony up their salaries and expenses while also having to suffer the damage they are doing to America’s reputation through their identification with an apartheid regime know who they are really loyal to? Maybe a little transparency is in order.

Per Morell’s model, Kushner, Friedman and Greenblatt might all be considered agents of influence since their brief as U.S. officials seems to include making sure that Israel is both happy and in the loop on everything they do. How often do they meet privately with Israeli officials? Are intelligence officers involved in their meetings? What do they not report back to Washington?

Nevertheless, my candidate for most likely to be a de facto Israeli agent of influence is America’s United Nations Ambassador Nikki Haley. Haley has from the start made it clear that she is all about Israel and she has done nothing since to change that impression, most dramatically so over the past week when she was “taking names” and threatened retaliation against any country that was so “disrespectful” as to dare to vote against Washington’s disastrous recognition of Jerusalem as Israel’s capital, which she also helped to bring about.

As governor of South Carolina, Haley first became identified as an unquestioning supporter of Israel. Immediately upon taking office at the United Nations she complained that “nowhere has the U.N.’s failure been more consistent and more outrageous than in its bias against our close ally Israel” and vowed that the “days of Israel bashing are over.” On a recent visit to Israel, she was applauded honored by Israeli Prime Minister Benjamin Netanyahu.

In February, Haley blocked the appointment of former Palestinian Prime Minister Salam Fayyad to a diplomatic position at the United Nations because he is a Palestinian. In a congressional hearing this past week, she was asked about the decision: “Is it this administration’s position that support for Israel and support for the appointment of a well-qualified individual of Palestinian nationality to an appointment at the U.N. are mutually exclusive?” Haley responded yes, that the administration is “supporting Israel” by blocking every Palestinian.

Haley is inevitably a hardliner on Syria and Iran, reflecting the Israeli bias. She has said that regime change in Damascus is a Trump administration priority. A recent foray involved the White House warning that it had “identified potential preparations for another chemical weapons attack by the Assad regime.” Haley elaborated in a tweet, “…further attacks will be blamed on Assad but also on Russia and Iran who support him killing his own people.” At one point, Haley warned “We need to see Russia choose to side with the civilized world over an Assad government that brutally terrorizes its own people.”

I would point out that none of these positions taken by Haley is an actual American interest, but they all involve Israeli preferences. As in the cases of Kushner, Friedman and Greenblatt, I would like to know how frequently she meets alone with Israeli officials and, most particularly, intelligence officers. Is she taking direction from the Israeli government? Is she an Israeli agent of influence or just a gullible fool? The American public, which pays her, and has to bear the consequences of her actions need to know.

Philip M. Giraldi is a former CIA counter-terrorism specialist and military intelligence officer who served nineteen years overseas in Turkey, Italy, Germany, and Spain. He was the CIA Chief of Base for the Barcelona Olympics in 1992 and was one of the first Americans to enter Afghanistan in December 2001.