“Declaration Of War”: Trump Jerusalem Decision Sparks Outrage, Warning Of “A Fire With No End In Sight” 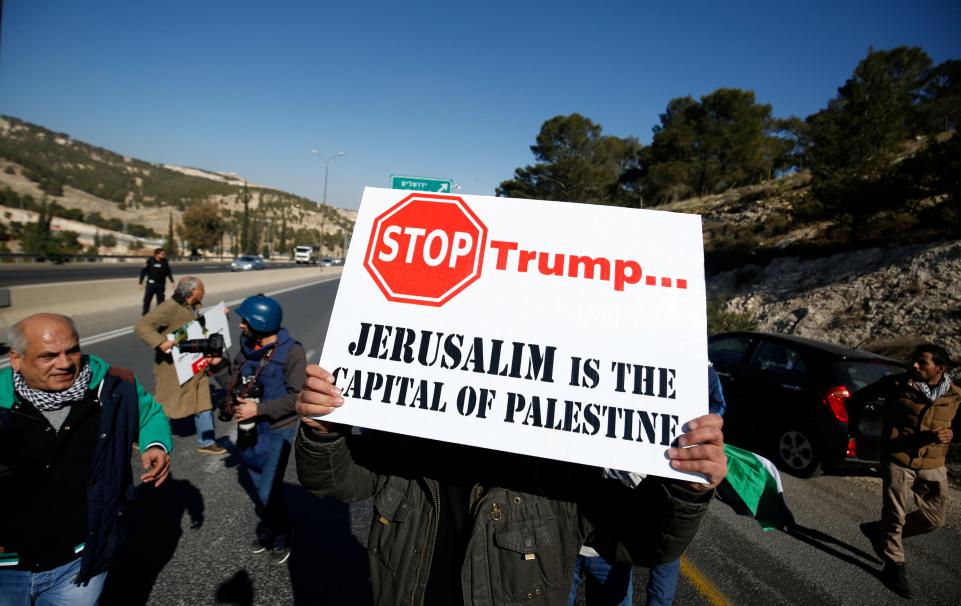 “Declaration Of War”: Trump Jerusalem Decision Sparks Outrage, Warning Of “A Fire With No End In Sight”

Today at 1pm, president Trump will announce the U.S. recognizes Jerusalem as the capital of Israel, but will sign a waiver delaying the relocation of the U.S. embassy from Tel Aviv to there for 6 months. Trump’s decision to unilaterally recognize Jerusalem upends decades of American policy in the Middle East and risks inflaming violence in an already-tense region. And sure enough, the announcement prompted an immediate – and furious – response sparking Arab, Muslim and European opposition to a move that risks violent protests.

While Israel naturally welcomed the news, Palestinian officials declared the Mideast peace process “finished”, calling it a declaration of war, and Turkey announced it would host a meeting of Islamic nations next week to give Muslim countries’ leaders an opportunity to coordinate a response.

Palestinian Authority President Mahmoud Abbas and Jordan’s King Abdullah II, warned him the announcement would have “dangerous” repercussions for regional stability. Separately, the Palestinian delegate to the United Kingdom said on Wednesday that President Trump’s move to recognize Jerusalem as the capital of Israel signals “a declaration of war” in the region. “He is declaring war in the Middle East, he is declaring war against 1.5 billion Muslims, hundreds of millions of Christians that are not going to accept the holy shrines to be totally under the hegemony of Israel,” Manuel Hassassian told BBC 4 Radio’s “Today.”

The Palestinians seek east Jerusalem as the capital of a future independent state and fear that Trump’s declaration essentially imposes on them a disastrous solution for one of the core issues in the Israeli-Palestinian conflict. “There is no way that there can be talks with the Americans. The peace process is finished. They have already pre-empted the outcome,” said Palestinian official Hanan Ashrawi. “They cannot take us for granted.”

Elsewhere, the Turkish government’s spokesman on Wednesday said that the United States’ decision to recognize Jerusalem as the capital of Israel will plunge the region and the world into “a fire with no end in sight”.

“Declaring Jerusalem a capital is disregarding history and the truths in the region, it is a big injustice/cruelty, shortsightedness, foolishness/madness, it is plunging the region and the world into a fire with no end in sight,” Deputy Prime Minister Bekir Bozdag said on Twitter. “I call on everyone to act logically, respect the agreements they signed and behave reasonably, avoid risking world peace for domestic politics or other reasons,” he said.

Turkish Foreign Minister Mevlut Cavusoglu said the “whole world is against” Trump’s move. He says that moving the embassy to Jerusalem would be a “grave mistake” and would “not bring any stability, peace but rather chaos and instability.”

Turkish President Recep Tayyip Erdogan said on Tuesday that US recognition of Jerusalem as Israel’s capital would be a “red line” for Muslims and “a big blow to the conscience of humanity.” The leader of NATO ally Turkey warned that the US taking such a step would force Ankara to sever diplomatic ties with the Jewish state. Erdogan has called for an emergency summit of the Organization of Islamic Cooperation on December 13 to discuss the possibility of Jerusalem becoming Israel’s capital.

The Council of the League of Arab States released a statement calling the recognition of Jerusalem as Israel’s capital an act of “open aggression” against “the rights of the Palestinian people and all Muslims and Christians.”

Iran’s Supreme Leader Ayatollah Ali Khamenei has also blasted Washington’s decision to relocate the US embassy to Jerusalem as a display of incompetence. “That they claim they want to announce Quds as the capital of occupied Palestine is because of their incompetence and failure,” Khamenei said, using the Arabic name for Jerusalem.

The Syrian government also weighed in on the planned move. “[The move] is the culmination of the crime of usurping Palestine and displacing the Palestinian people,” a Foreign Ministry official told state news agency SANA.

On Tuesday, Palestinian Christians in Bethlehem were spotted burning photographs of Donald Trump and holding signs reading “Move the embassy to your country, not ours,” and “Jerusalem, Palestine’s heart, is not up to negotiations.”

The harsh global reaction cast questions about the feasibility of a brewing U.S. peace plan that is expected to be presented by the White House in the near future.

The one winner, Israel, was happy with the outcome: Israel’s prime minister, Benjamin Netanyahu, said on Facebook that “Our historical national identity is receiving important expressions everyday.” He said he would comment further later in the day. Other members of his Cabinet were more forthcoming. Education Minister Naftali Bennett, head of the nationalist Jewish Home party, praised what he called Trump’s “bold and yet natural” move.

“The sooner the Arab world recognizes Jerusalem as our capital, the sooner we will reach real peace. Real peace that is not predicated on an illusion that we are going to carve up Jerusalem and carve up Israel,” Bennett told The Associated Press on the sidelines of the Jerusalem Post Diplomatic Conference.

According to AP, Pope Francis said he was “profoundly concerned” and appealed that “everyone respects the status quo of the city.” China, which has good ties with Israel and the Palestinians, expressed concerns over “possible aggravation of regional tensions.” Two leading Lebanese newspapers published front-page rebukes of Trump.

Britain’s Foreign Minister, Boris Johnson, who had already expressed concern about the U.S. decision, on Wednesday said it was now time for the Americans to present their peace plan for the region.

Trump’s Mideast team, led by his adviser and son-in-law, Jared Kushner, have spent months meeting with Israeli, Palestinian and Arab leaders. Details of their long awaited plan remain a mystery.

“Clearly this is a decision that makes it more important than ever that the long-awaited American proposals on the Middle East peace process are now brought forward,” Johnson told reporters in Brussels.

In his speech, Trump was expected to instruct the State Department to begin the multi-year process of moving the American Embassy from Tel Aviv to the holy city. It remained unclear,  however, when he might take that physical step, which is required by U.S. law but has been waived on national security grounds for more than two decades.

The officials said numerous logistical and security details, as well as site determination and construction, could take three or four years to sort out.

To that end, the officials said Trump would delay the embassy move by signing a waiver, which is required by U.S. law every six months. He will continue to sign the waiver until preparations for the embassy move are complete.

The officials, speaking on condition of anonymity pending Trump’s announcement, said the decision was merely an acknowledgment of “historical and current reality” rather than a political statement and said the city’s physical and political borders will not be compromised. They noted that almost all of Israel’s government agencies and parliament are in Jerusalem, rather than Tel Aviv, where the U.S. and other countries maintain embassies.

Still, the declaration of Jerusalem as Israel’s capital carries deep symbolic significance and could have dangerous consequences. The competing claims to east Jerusalem, the section of the city captured by Israel in 1967, have frequently boiled over into deadly violence over the years. East Jerusalem is home to the city’s most sensitive Jewish, Muslim and Christian holy sites, as well as its 330,000 Palestinian residents.

The United States has never endorsed the Jewish state’s claim of sovereignty over any part of Jerusalem and has insisted its status be resolved through Israeli-Palestinian negotiation.

The mere consideration of Trump changing the status quo sparked a renewed U.S. security warning on Tuesday. America’s consulate in Jerusalem ordered U.S. personnel and their families to avoid visiting Jerusalem’s Old City or the West Bank, and urged American citizens in general to avoid places with increased police or military presence.

Israel is bracing for demonstrations in the West Bank, the Gaza Strip and East Jerusalem ahead of Trump’s announcement. The Israel Defense Forces (IDF) are preparing for violence after Hamas called for a “day of rage” in response to Trump’s controversial decision. The main demonstration is planned for Thursday afternoon at al-Manara Square in Ramallah. People from across the West Bank are expected to participate.

On Wednesday, a large demonstration is scheduled to take place in Jenin. Israeli police and military are also preparing for demonstrations near the American embassy in Tel Aviv. Thousands of Israeli law enforcers are expected to be on duty in Jerusalem on Friday.

Foreign governments are already anticipating violence. The German Foreign Ministry updated its travel advice for Israel and the Palestinian territories on Wednesday, warning that “from December 6, 2017, there may be demonstrations in Jerusalem, the West Bank and the Gaza Strip. Violent clashes cannot be ruled out.”

The US State Department also issued a travel warning, urging government employees and their families not to visit Jerusalem’s Old City or the West Bank.

As a result, many have speculated overnight if instead promoting peace, Trump’s or rather Kushner’s decision wasn’t a catalyst for even more deadly fighting in the region, which would only ultimately benefit the US military-industrial complex.