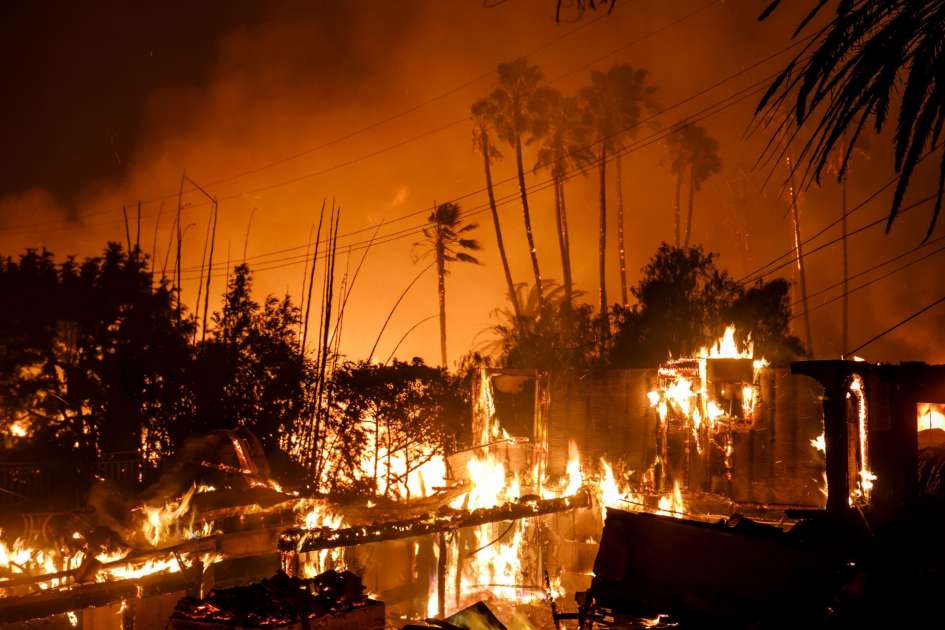 In what sounds like a replay of the devastating fires that killed dozens of people and torched a broad swath of California wine country this past summer, at least five discrete fires barreled across Southern California with extreme speed, torching more than 65,000 acres as firefighters struggled to contain the simultaneous infernos.

The first blaze started at about 6:25 p.m. Monday in the foothills near Thomas Aquinas College in Santa Paula, a popular hiking destination. It grew quickly to more than 15 square miles in the hours that followed, consuming vegetation that hasn’t burned in decades, Ventura County Fire Sgt. Eric Buschow said, according to CNN.

Powerful Santa Ana winds and extremely dry conditions have fueled the wildfires, according to the Washington Post, adding hundreds of millions – if not billions – of dollars in damage to what has already been a devastating year for fires. The winds that caused the fires were part of the season’s longest and strongest wind event – driving down from the desert and mountains into the city of Los Angeles.

So far, the latest fires have forced tens of thousands to flee their homes, burned down more than a hundred buildings and triggered power outages in the region.

According to CNN, on Tuesday, the city of Ventura declared a daily curfew, beginning 10 pm to 5 am. The curfew is to protect residents and prevent crime such as looting in the evacuation areas, the city said. The largest fire, called the Thomas Fire, was seen crossing the 101 Freeway north of the city of Ventura. That fire had been burning at nearly an acre per second Tuesday. At that speed, it would have covered Manhattan’s Central Park in about 14 minutes.

The Thomas Fire spanned 50,000 acres (about 78 square miles) in Ventura County alone, which sits just north of Los Angeles. The fire was 0% contained as of Tuesday night.

Los Angeles Mayor Eric Garcetti said about 150,000 people in Los Angeles were affected by evacuation orders for another fire, called the Creek Fire, near Sylmar and Lake View Terrace. About 43,000 homes are without power, according to Southern California Edison Tuesday night. More outages are possible because flames were burning along power transmission paths, a spokeswoman said.

The Rye Fire near Santa Clarita in Los Angeles County grew to about 5,000 acres and was 5% contained. That fire was spotted near the Six Flags Magic Mountain in Valencia. In San Bernardino County, two smaller fires sprang up. One is fully contained while the Little Mountain fire, at 100 acres, is 0% contained.

After a brief respite Tuesday evening, the Santa Ana winds are expected to pick up again on Wednesday and Thursday, which will likely stoke the flames.

At least five homes turned to rubble after #VenturaFire rolled through. A 360 view from just one street. This is a portion of Heidelberg ave. pic.twitter.com/DkGjw3N8Tp

The mayor of Los Angeles said he expects fire crews to be working all week to contain the flames. “We expect to be out here all week fighting and containing this fire,” LA Mayor Eric Garcetti said. The fires spewed so much smoke that they were captured in a NASA image from space.