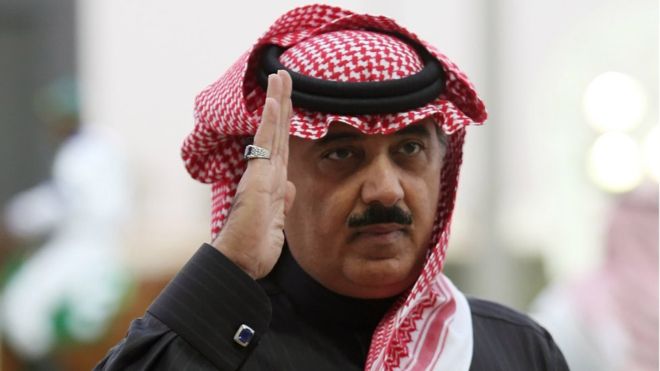 Saudi Prince Miteb bin Abdullah has been released more than three weeks after he was detained on allegations of corruption, officials say.

Prince Miteb, once seen as a contender to the throne, was freed after agreeing an “acceptable settlement” with authorities of more than $1bn (£750m).

He is one of more than 200 political and business figures detained in anti-corruption raids on 4 November.

Three other people have also reached settlements with the Saudi government.

“Yes, Prince Miteb was released this morning [Tuesday],” a source close to the government told the Agence France-Presse news agency.

Prince Miteb, who is the cousin of Crown Prince Mohammed bin Salman and headed Saudi Arabia’s elite National Guard, was the most politically influential royal detained in the corruption crackdown.

The 64-year-old son of the late King Abdullah was sacked shortly before his detention.

Princes, ministers and top businessmen were arrested at the beginning of the month and detained in a luxury hotel, accused of corruption.

Authorities grounded their private aircraft and their assets were seized.

Corruption is rampant in Saudi Arabia with bribes, sweeteners and lavish kickbacks having long been an integral part of doing business in the world’s richest oil-producing nation.

The crown prince – backed by his father, the 81-year-old King Salman – has made no secret of his belief that the country needs reform and has focused his attention on some of the richest men in Arabia.

Many ordinary Saudis have welcomed the move to tackle corruption with the hope that some of their nation’s wealth will be redistributed to the general population.