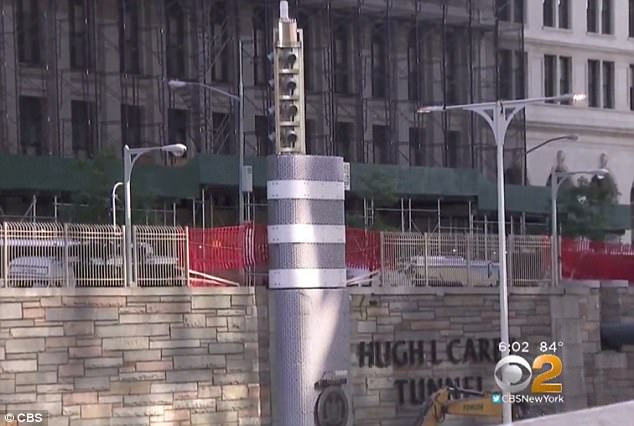 Mysterious 30 foot tower next to the Hugh Carey Tunnel

Everyone knows New Yorkers are tough to rattle, but even the most machismo Manhattanites are mumbling nervously about some mysterious metal towers that seemingly appeared overnight at the openings of tunnels around the city. The Metropolitan Transportation Authority has an answer, but no one who’s used the New York subway system trusts what they say. To make things more sinister, the towers are rumored to be connected to Homeland Security and the MTA chairman was very evasive when questioned. Conspiracy theory, here we come!

The story was broken by CBS2 in New York City. According to the report, little is known about the mysterious towers project except the price — $100 million. That alone is enough to cause concern because government officials looking to get re-elected are normally cutting costs, not spending on secret projects. It apparently has been known for some time that New York’s antiquated toll booths at tunnel and bridge entrances would be replaced by something more technologically up-to-date, but no one expected them to be metal monstrosities that defy the imagination of those who see them.

“It’s a bit mind-boggling that the MTA is approving $100 million for what appears to us to be big, decorative pylons.” 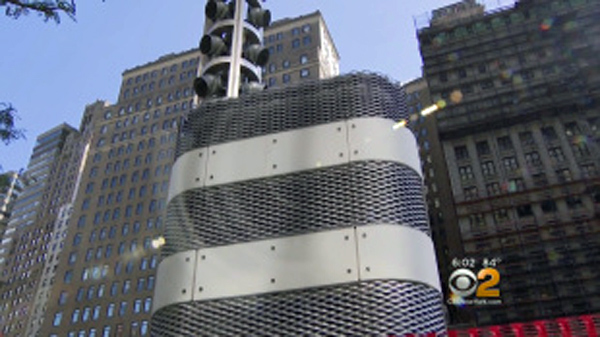 That’s the description given by John Kaehny of the watchdog group Reinvent Albany. However, he knows the metal bases and towers of what appear to be lights are much more because MTA Chairman Joe Lhota said so.

“The base of these new pieces that are going up include whatever fiber optics are necessary for those Homeland Security items.”

Homeland Security? New Yorkers rate them only slightly higher than the bottom of the barrel where MTA resides, and for good reason. When asked for details about these huge devices that will be pointed at New Yorkers 24/7, like whether they will be capable of facial recognition, Lhota said:

“I’m not at liberty to discuss that.”

Well, that’s slightly better than “No comment” … which was the response of Cedrick Fulton, MTA’s bridges and tunnels manager.

With that kind of evasive action, the purpose of the towers is wide open for conspiracy speculation and comments, which included but were not limited to:

No one seemed to have any suggestions indicating they believed the towers were put up for anything good. Most seem to agree with one of the people interviewed:

“I’m going to guess that it’s not just a decoration.”

What do YOU think these mysterious metal towers are? Would let them be installed in YOUR city? Do you think you’d be given a choice?

Do you have a safe place to hide?