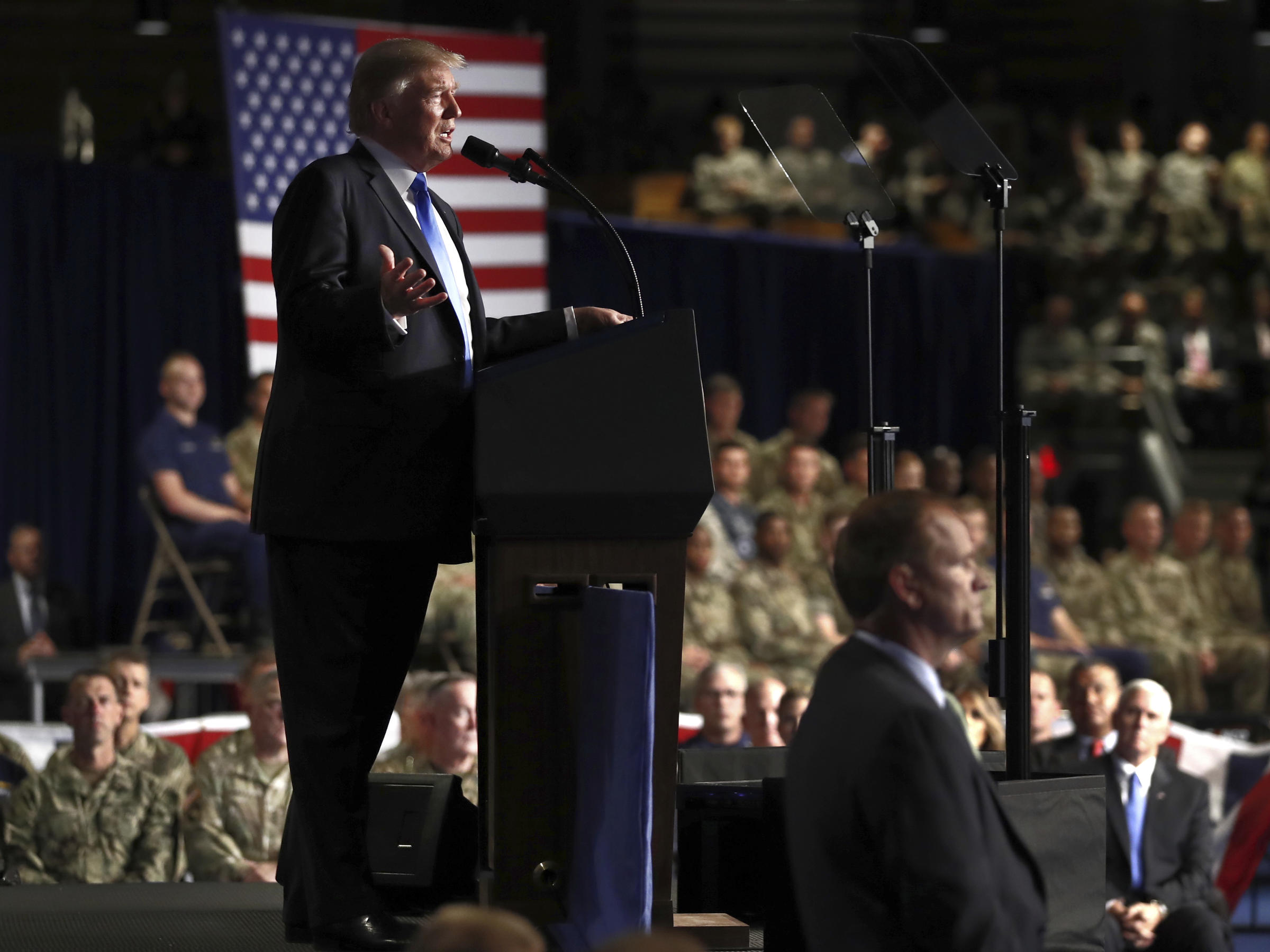 President Trump announces his South Asia strategy, saying that conditions on the ground in Afghanistan, not timetables, will dictate decisions.

In an extended tweetstorm concurrent with Trump’s Monday night Afghanistan address, Ron Paul lashed out at the president, saying that at long last, Trump’s neocon nature had emerged. “Steve Bannon brakes removed. Neocons feeling their oats” and urging the public to “Beware! @LindseyGrahamSC loves Trump’s speech! Why are arch-neocons celebrating so much? Very telling!.” It appears that Paul’s assessment of Trump’s new strategy was not far off, because as the Hill reports today, the neoconservative wing of the Republican Party applauded President Trump’s troop surge in Afghanistan, even as members of the president’s base accused him of capitulating to the national security establishment.

Some of the loudest accolades came from foreign policy hawks in the Senate, including two of Trump’s fiercest GOP critics, Lindsey Graham and John McCain, who praised Trump for going against his “instinct” and delegating the decision to his generals, who convinced him that victory could be had in the 16-year war that has spanned three administrations.

McCain echoed Graham, saying Trump was moving beyond former President Obama’s “failed strategy of merely postponing defeat,” although it was not exactly clear how since Trump was doing precisely what Obama (and Hillary Clinton did and would have one), adding that it was “especially important” that Trump did not commit to a timeline for withdrawal.

Marco Rubio, another proponent of foreign US intervention and a “muscular” foreign policy, called Trump’s strategy “the right approach.”

Support also came from prominent neoconservative writers and thinkers who had long been worried that Trump, who ran on an “America First” platform, would take a more isolationist approach to foreign policy. John Podhoretz, a former speechwriter for President George W. Bush and the editor of the conservative magazine Commentary, reacted to the speech by saying it’s almost as if Bush’s former deputy secretary of Defense, Paul Wolfowitz, has been put in charge.

The Weekly Standard’s Bill Kristol, a key voice behind every single recent US war and intervention, a “Never Trump” Republican and another “uber” neocon, reveled in the fact that Trump’s generals appeared to have won the power struggle over his nationalist advisers, like former chief strategist Stephen Bannon.

Out: Flynn, Priebus, Bannon.
In: McMaster and Kelly.
There are limits to the difference advisors can make, but that is a massive upgrade.

“President Trump’s ‘America First’ base was the biggest loser of Trump’s speech on Afghanistan Monday night, and many quickly expressed their disappointment at the business-as-usual address from the president who had once promised to limit American intervention abroad and focus on nation-building at home,” Breitbart reporter Adam Shaw wrote.

Predictably Ron Paul’s son, senator Rand Paul (R-Ky.), a prominent non-interventionist whose views on foreign policy are derided by the conservative foreign policy establishment, bemoaned the costs to the military and taxpayers for the continuing war: “I strongly disagree with the president’s actions here. If the president and my colleagues want to continue the war in Afghanistan, then at the very least Congress should vote on it. I’ll insist they do it this fall, and I’ll be leading the charge for ‘no.’ ”

I thought we were going to drain the swamp in Washington, not clear the desert in Afghanistan. https://t.co/gQFnQjoj0n

Not surprisingly, the harshest criticism for Trump’s new foreign policy came from the founder of private military company Blackwater, who ripped Trump’s new Afghanistan war plan as an “Obama-lite policy.”

Erik Prince who for obvious reason has encouraged administration officials to use contractors instead of U.S. military forces in Afghanistan, called Trump’s plan “a continuation of the same limited or failed strategy of the last 16 years…. This is a kind of Obama-lite policy,” Prince told The Hill, referring to President Obama’s 30,000 troop surge in 2009 in Afghanistan. The increase brought the total number of troops in the country to more than 100,000 in 2011 before a rapid drawdown.

“This is a lighter but almost as expensive version. Remember, the Pentagon now is spending as much as when they had five times as many troops in the country. It’s horrendous how they’ve lost control of the spending. That’s what makes this so unsustainable,” Prince added.

“He said it’s not a blank check, but the Pentagon continues to stand and plan and operationalize as if it is a blank check,” Prince said. “That’s the fundamental problem the plan now doesn’t address: How does this end. The Pentagon wants to position this like a forever occupation like South Korea. And I think that’s a horrendous and untenable position.”

Surprisingly, Prince was doubtful that the president and Defense Secretary James Mattis are fully behind the strategy: “I don’t think the president loves this plan, I don’t think Secretary Mattis does either. He’s not even on the same continent,” Prince said, referring to Mattis’s current trip to the Middle East and Europe.

So if neither Trump, nor his chief military advisor “loved” the plan – and yet every prominent neocon did – one wonders, just where did this plan come from?