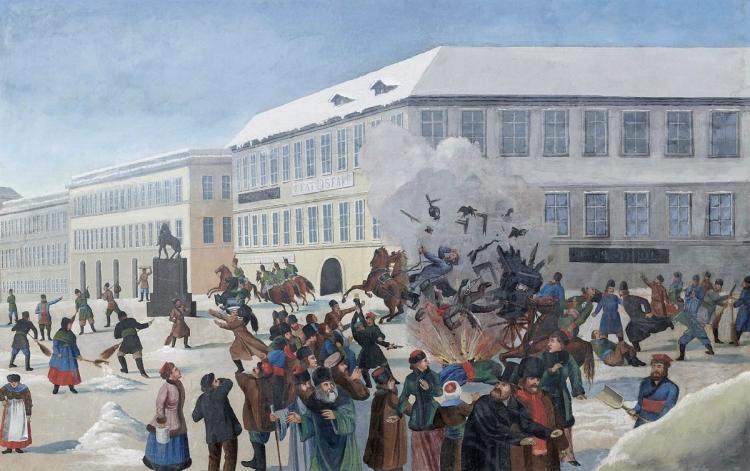 Revolutionary Jews were the earliest and best practitioners of terror and still are (i.e. 9-11). Valuldas Aneluskas describes how they assassinated the beloved Czar Alexander II in 1881. They went on to assassinate two Interior Ministers in 1902 and 1904 and the Prime Minister Pyotr Stolypin in 1911. The victims were all reformers but the revolutionary Jewish agenda was never reform; it was Communist tyranny. Reform would have robbed them of their excuse to enslave, murder and plunder.

by Valuldas Anelauskas
(Excerpt by henrymakow.com)

In Russian revolutionary history, the eventful years of 1879-81 inaugurated what is generally known as the decade of Narodnaya Volya. While Chernyj Peredel was fighting for its survival, Narodnaya Volya [People’s Will]  initiated a string of terrorist operations which culminated in the assassination of Alexander II in 1881.

When the People’s Will decided to assassinate Alexander II, first they attempted to use nitroglycerine to destroy the Tsar’s train. The Moscow railroad explosion of 19 November 1879 was part of Narodnaya Volya’s first systematic, though unsuccessful, assassination project against the Tsar.

Three Jews were directly involved: Savelii Zlatopolskii, Grigorii Goldenberg and Aizik Aronchik. The project was designed to kill Alexander II on his return trip by rail from the Crimea to St. Petersburg by mining the tracks at three different locations: near Odessa, Alexandrovsk, and Moscow. However, the terrorist miscalculated and it destroyed another train instead. An attempt to blow up the Kamenny Bridge in St. Petersburg as the Tsar was passing over it was also unsuccessful.

The next attempt on Alexander’s life involved a carpenter who had managed to find work in the Winter Palace. Allowed to sleep on the premises, each day he brought packets of dynamite into his room and concealed it in his bedding. He constructed a mine in the basement of the building under the dinning-room. The mine went off at half past six at the time that the People’s Will had calculated Alexander would be having his dinner. However, his main guest, Prince Alexander of Battenburg, had arrived late and dinner was delayed and the dinning-room was empty. Alexander was unharmed but sixty-seven people were killed or badly wounded by the explosion. The People’s Will contacted the Russian government and claimed they would call off the terror campaign if the Russian people were granted a constitution that provided free elections and an end to censorship.

On 25th February, 1880, Alexander II announced that he was considering granting the Russian people a constitution. To show his good will a number of political 14 prisoners were released from prison. Count Michael Tarielovitch Loris-Melikoff, the Minister of the Interior, was given the task of devising a constitution that would satisfy the reformers but at the same time preserve the powers of the autocracy.

Nevertheless, the People’s Will began to make plans for another assassination attempt. In 1881 a plot hatched in the home of the Jewess, Hesia Helfman, was successful. On 1st March, 1881, Alexander II was travelling in a closed carriage, from Michaelovsky Palace to the Winter Palace in St. Petersburg. An armed Cossack sat with the coach-driver and another six Cossacks followed on horseback. Behind them came a group of police officers in sledges. All along the route he was watched by members of the People’s Will. On a street corner near the Catherine Canal terrorists threw their bombs at the Tsar’s carriage.

The bombs missed the carriage and instead landed amongst the Cossacks. The Tsar was unhurt but insisted on getting out of the carriage to check the condition of the injured men. While he was standing with the wounded Cossacks another terrorist threw his bomb. Alexander was killed instantly and the explosion was so great that terrorist himself also died from the bomb blast.

Alexander II, left,  was blown up and so ended an era. The Czar Alexander II was actually so loved by the common Russian people (because he was such a reformer) that after his death there was built an incredibly beautiful church right on the spot where he was murdered and that church was given the name “Spas na Krovi”, which means “Saviour on Blood.”

Now, what, in fact, was the Jewish role in the terrorism of Narodnaya Volya during its most volatile period of activity in 1879-81? What precisely was the contribution of Jews to the terrorism of Volya, which claimed the life of Alexander II in 1881 and frightened the Russian government throughout the 1880s? The conventional answer has been that Jews contributed next to nothing to the momentous surge of Populist terrorism.

….As Narodnaya Volya’s most reliable and capable keeper of conspiratorial quarters, [Jewess] Gesia Helfman had been in charge of managing the operational base for the 1 March attempt. [Haberer,Jews and Revolution in Nineteenth-Century Russia, p.198]

As R. M. Kantor wrote, it was therefore in “the preparation and speedy execution of this terrorist act … that Helfman made a vital contribution within her unique sphere of competence.” The assassination of Alexander II on 1 March 1881 was the momentous event, the final result of two years of systematic terrorist activity that witnessed Jewish participation in almost all its facets, calls for an assessment of the role of Jews in a party committed to regicide. [Haberer, Jews and Revolution in Nineteenth-Century Russia, p.198]

[The assassination] restored the ideal condition depicted by Moses Hess (one of the earliest Zionist propagandists) in the year following the liberation of the serfs: “We Jews shall always remain strangers among the nations; these, it is true, will grant us rights from feelings of humanity and justice, but they will never respect us so long as we place our great memories in the second rank and accept as our first principle, ‘Where I flourish, there is my country’.” [Quoted in Douglas Reed, The Controversy of Zion(Durban, South Africa: Dolphin Press, 1978), p.196]

During this period Leon Pinsker, another herald of Zionism, published his book Auto-Emancipation. The title was a threat (to the initiated); it meant, “We will not accept any kind of emancipation bestowed on us by others; we will emancipate ourselves and will give ’emancipation’ our own interpretation.”

He said, “There is an inexorable and inescapable conflict between humans known as Jews and other humans”, and he described the master-method to be used to bring about this “self-emancipation” and to “restore the Jewish nation”: the struggle to achieve these ends, he said, “must be entered upon in such a spirit as to exert an irresistible pressure upon the international politics of the present.” [Quoted in Reed, The Controversy of Zion, p.196] .

The reaction to the assassination of Alexander II was, of course, instantaneous and far reaching. There was a widespread belief in and out of the government, that if the Jews were dissatisfied with the rule of even Alexander II — whom many people in Russia and abroad had described as “the most benevolent prince that ever ruled Russia” — then they would be satisfied with nothing less than outright domination of Russia.