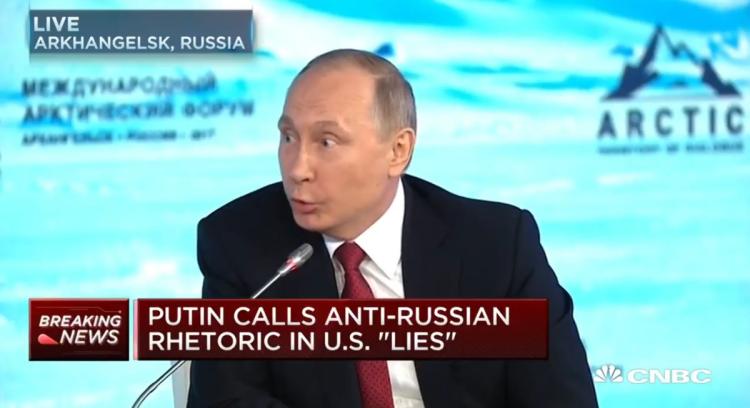 Putin: “Russian Meddling Is A Fiction Democrats Invented To Divert Blame For Their Defeat”

With McCarthyism 2.0 continues to run amok in the US, spread like a virulent plague by unnamed, unknown, even fabricated sources, over in France one day after his first meeting with French president Emanuel Macron, the man who supposedly colluded with and was Trump’s pre-election puppet master (but had to wait until after the election to set up back-channels with Jared Kushner) Vladimir Putin sat down for an interview with French newspaper Le Figaro in which the Russian president expressed the belief that Moscow and Western capitals “all want security, peace, safety and cooperation.”

“Therefore, we should not build up tensions or invent fictional threats from Russia, some hybrid warfare etc.,” the Russian leader told his French hosts. “What is the major security problem today? Terrorism. There are bombings in Europe, in Paris, in Russia, in Belgium. There is a war in the Middle East. This is the main concern. But no, let us keep speculating on the threat from Russia.”

Case in point, in the latest attempt to stir up an anti-Russian frenzy, America’s biggest neocon, John McCain said that Russia is even more dangerous than ISIS. “You made these things up yourselves and now scare yourselves with them and even use them to plan your prospective policies. These policies have no prospects. The only possible future is in cooperation in all areas, including security issues.”

“Hacking” Clinton And the DNC

Even with the FBI special investigation on “Russian collusion” with the Trump campaign and administration taking place in the background, Putin once again dismissed allegations of Russian meddling in last year’s U.S. presidential election as “fiction” invented by Democrats to divert the blame for their defeat. Putin repeated his strong denial of Russia’s involvement in the hacking of Democratic National Committee emails that yielded disclosures that proved embarrassing for Hillary Clinton’s campaign. Instead, he countered that claims of Russian interference were driven by the “desire of those who lost the U.S. elections to improve their standing.”

“They want to explain to themselves and prove to others that they had nothing to do with it, their policy was right, they have done everything well, but someone from the outside cheated them,” he continued. “It’s not so. They simply lost, and they must acknowledge it.” That has proven easier said than done, because half a year after the election, Hillary Clinton still blames WikiLeaks and James Comey for her loss. Ironically, what Putin said next, namely that the “people who lost the vote hate to acknowledge that they indeed lost because the person who won was closer to the people and had a better understanding of what people wanted,” is precisely what even Joe Biden has admitted several weeks ago, and once again yesterday. Maybe Uncle Joe is a Russian secret agent too…

In reflecting on the ongoing scandal, which has seen constant, daily accusations of collusion and interference if no evidence (yet), Putin conceded that the damage has already been done and Russia’s hopes for a new detente under Trump have been shattered by congressional and FBI investigations of the Trump campaign’s ties to Russia. In the interview, Putin also said the accusations of meddling leveled at Russia have destabilized international affairs

Going back to the hotly debated topic of “influencing” the election, Putin once again made a dangerous dose of sense when he argued that trying to influence the U.S. vote would make no sense for Moscow as a U.S. president can’t unilaterally shape policies. “Russia has never engaged in that, we don’t need it and it makes no sense to do it,” he said. “Presidents come and go, but policies don’t change. You know why? Because the power of bureaucracy is very strong.” Especially when the bureaucracy in question is the so-called “deep state.”

Asked who could have been behind the hacking of the Democrats’ emails, The Russian leader added that he agreed with Trump that it could have been anyone. “Maybe someone lying in his bed invented something or maybe someone deliberately inserted a USB with a Russian citizen’s signature or anything else,” Putin said. “Anything can be done in this virtual world.” This echoed a remark by Trump during a September presidential debate in which he said of the DNC hacks: “It could be Russia, but it could be China, could also be lots of other people. It could be someone sitting on their bed that weighs 400 pounds.”

Putin was asked about French President Emmanuel Macron’s warning that any use of chemical weapons in Syria was a “red line” that would be met by reprisals, to which the Russian president said he agreed with that position. But he also reiterated Russia’s view that Syrian President Bashar Assad’s forces weren’t responsible for a fatal chemical attack in Syria in April. Putin said Russia had offered the U.S. and its allies the chance to inspect the Syrian base for traces of the chemical agent. He added that their refusal reflected a desire to justify military action against Assad. “There is no proof of Assad using chemical weapons,” Putin insisted in the interview. “We firmly believe that this is a provocation. President Assad did not use chemical weapons.”

“Moreover, I believe that this issue should be addressed on a broader scale. President Macron shares this view. No matter who uses chemical weapons against people and organizations, the international community must formulate a common policy and find a solution that would make the use of such weapons impossible for anyone,” the Russian leader said.

Weighing on the outcome of the recent NATO summit, at which Russia was branded a threat to security, Putin pointed to the ambiguous signals Moscow is receiving from the alliance. “What attracted my attention is that the NATO leaders spoke at their summit about a desire to improve relations with Russia. Then why are they increasing their military spending? Whom are they planning to fight against?” Putin said, adding that Russia nevertheless “feels confident” in its own defenses. Washington’s appeal to other NATO members to ramp up their military spending and alleviate the financial burden the US is forced to shoulder is “understandable” and “pragmatic,” Putin said.

But the strategy employed by the alliance against Russia is “shortsighted,” the Russian president added, referring to the NATO’s expanding missile defense infrastructure on Russia’s doorstep and calling it “an extremely dangerous development for international security.” Putin lamented that an idea of a comprehensive security system envisioned in the 1990s that would span Europe, Russia and US has never become a reality, arguing that it would have spared Russia many challenges to its security stemming from NATO. “Perhaps all this would not have happened. But it did, and we cannot rewind history, it is not a movie.”