Globalists Use ISIS To Terrorize The Philippines With Syria Strategy, Duterte In Crosshairs 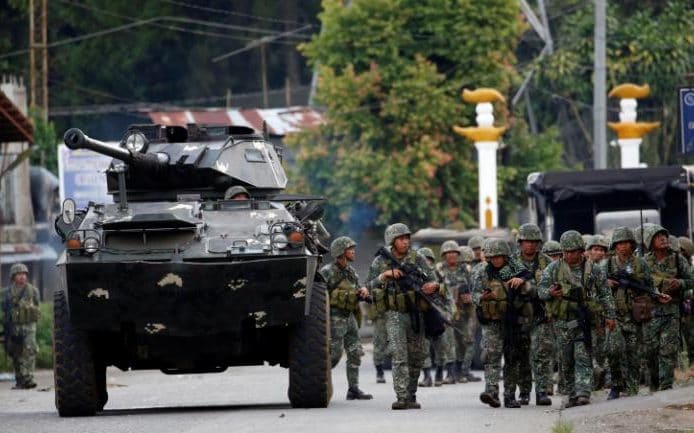 Troops have been deployed in Marawi city in the Philippines to stop the Maute rebels. CREDIT: REUTERS

Globalists Use ISIS To Terrorize The Philippines With Syria Strategy, Duterte In Crosshairs

Death toll nears 100 on sixth day of violence in Philippines

The siege in the Philippines has escalated after eight civilians were found in a ravine shot dead by militants linked to Islamic State.

Rebel gunmen stopped the civilians, believed to be carpenters, as they tried to escape the violence in Marawi City, according to police.

They were killed because they could not cite verses of the Quran, Marawi police officer Jamail C. Mangadang said.

Police found the bodies had been shot in the head, some with hands tied behind their backs, and a sign was tied to the one of the bodies that said “munafik” (traitor). Thousands of civilians have been evacuated from their homes due to the violent siege.  CREDIT: REUTERS

The Maute rebels have been fighting for control of Marawi City for six days as they try to win recognition from Islamic State as its Southeast Asian branch.

“This is a conflict that has gone beyond proportion. The magnitude of the degree of the damage and the people that are affected … it’s really massive,” local politician Zia Alonto Adiong told Reuters.

In an effort to stem the siege, President Rodrigo Duterte put the mainly Muslim Mindanao island under martial law on Tuesday, but the army confirmed that at least 16 civilians have died in the clashes, as the death toll neared 100.

Maute rebels started the takeover of the city after President Duterte’s security forces attempted to arrest Isnilon Hapilon, the man believed to be Islamic State’s point-man in the country.

Mr Hapilon is judged to be one of the world’s most dangerous terrorists and the United States is offering a bounty of $5m (£3.9m) for his capture. In response, the militants set fire to buildings and took hold of a school, hospital, and a cathedral on Tuesday, and tens of thousands of people have since fled from Marawi.

“Their refusal to surrender is holding the city captive. Hence, it is now increasingly becoming necessary to use more surgical airstrikes to clear the city and to bring this rebellion to a quicker end,” said Brigadier-General Restituto Padilla.

Guns and weapon permits were all outlawed on Sunday on Mindanao island, which is home to 22 million people.

Rockets were launched at the rebels and more ground troops were deployed as the campaign to stop the Maute group of around 260 armed followers stepped up.

President Duterte cancelled his planned visit to Japan and said: “My order to the troops is (that) all people who are not authorised by government to carry arms and they resist, kill them, wipe them out.”