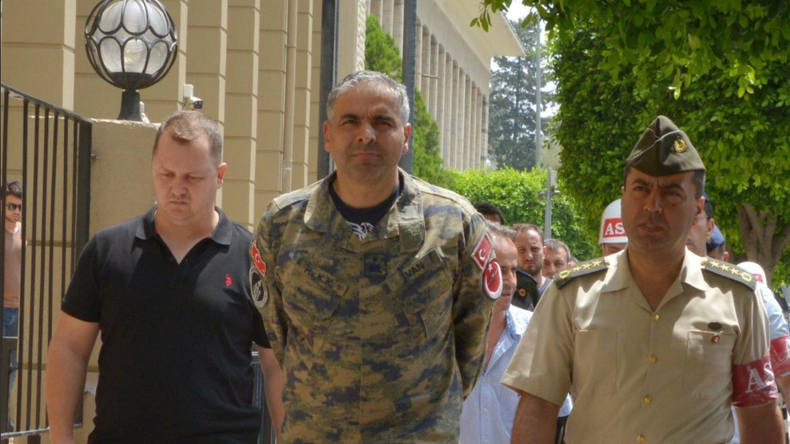 Turkish US air base commander arrested over coup plot

_
The top military official at Incirlik Air Base has been arrested, along with other officers at the base — a major U.S. air operations center in the Middle East — in connection with an attempt by a military faction to overthrow the government of Turkey, authorities said Sunday.

The arrests came as huge crowds turned out for funerals of those killed in the uprising, with secular and nationalist leaders on Sunday joining military brass for prayers at mosques — a rare display of unity in a country riven by ideological divisions.

Hundreds of thousands filled squares in cities across the country in a show of defiance after the failed military coup that left 104 soldiers and 161 civilians dead and at least 1,440 people injured.

The Turkish armed forces issued a statement Sunday saying the uprising was engineered by “terrorist traitors embedded within the Turkish army who belonged to an illegal organization.”

“The coup plotters … have been neutralized as of now and will receive the heaviest punishment permitted by law,” it concluded.

Turkish officials said the organizers of the uprising were given crucial aid from officers at Incirlik Air Base, a facility that hosts most of the 2,500 U.S. military personnel stationed in Turkey and is a key base for the U.S.-led coalition’s ongoing air campaign to defeat the Islamic State militant group in neighboring Iraq and Syria.

Though the base reopened for air operations Sunday after a 24-hour closure, official media reported the arrest of the top Turkish military official at Incirlik, Gen. Bekir Ercan Van.

Van was among 10 soldiers arrested at the base, part of an operation Turkish officials say provided air-to-air refueling for F-16 fighter jets deployed by the leaders of the coup attempt Friday night and Saturday morning.

The extent of the coup and who planned it is still largely unknown, although Ankara has blamed followers of Fethullah Gulen, an aging cleric in exile in Pennsylvania accused by the government of engineering the coup attempt and attempting to run a “parallel government.”

President Recep Tayyip Erdogan has called for Gulen’s extradition from the U.S. and suggested parliament should lift a moratorium on the death penalty to deal with the cleric and those involved in the uprising.

In a rally Saturday, Erdogan publicly addressed President Obama, saying Gulen must be turned over to Turkey, and another official, Prime Minister Binali Yildirim, said failure to do so was tantamount to an act of war. Labor Minister Suleyman Soylu said he believed Washington was behind the coup.

On Sunday, Secretary of State John F. Kerry said, “We think it’s irresponsible to have accusations of American involvement, when we’re simply waiting for their request, which we’re absolutely prepared to act on if it meets the legal standard.”

Speaking to CNN during a trip to Europe, he said he made it clear to his Turkish counterpart, Mevlut Cavusoglu, in three telephone calls since Friday night, that the U.S. was not “harboring anybody.” In one of those calls, Kerry also urged the Turkish government show “restraint” and “respect for due process” and international law as it pursues those who planned and staged the coup, according to the State Department.

Among those killed during the clashes was Erdogan’s campaign manager, Erol Olcak, along with his 16-year-old son, shot by soldiers as they held the Bosporus Bridge in Istanbul on Friday night. Ilhan Varank, the brother of one of Erdogan’s chief advisors, also was killed at the Istanbul municipality headquarters during a confrontation with soldiers that lasted more than four hours.

Erdogan himself carried the coffin of Varank at a funeral ceremony for him and other victims in the Fatih mosque, about a mile from where they were killed. A crowd of thousands surrounded Erdogan, chanting for the execution of the coup plotters, and the president pledged that parliament would take steps to ensure a “heavy price” for the renegades.

Gulen appeared before journalists at his compound in Pennsylvania to deny any involvement.

“As someone who has suffered under multiple coups during the past five decades, it is especially insulting to be accused of having any link to such an attempt,” Gulen said.

Gulen has lived in exile since the late 1990s, when a secular government allied with the military accused him of attempting to overthrow the government. Erdogan was at the time allied with Gulen, and Erdogan was jailed on similar accusations in 1999.

Gulen’s movement, called Hizmet, includes hundreds of schools, banks, trade associations and news outlets, many of which were the largest in the country until a crackdown began against them three years ago. Gulen was accused of trying to take control of the judiciary, police and national intelligence association, and over the last three years, about 4,000 Hizmet associates have been detained, many accused of belonging to a terrorist organization.

They include hundreds of journalists, such as Celil Sagir, who had been editor of the Today’s Zaman newspaper until the government seized the publication this year.

“Erdogan blames Hizmet for the coup attempt because he wants to use this as an opportunity to prove that Hizmet is an armed terrorist organization. For almost three years, he claimed it, but no one has bought it. Now he probably believes he got the opportunity to persuade people,” Sagir said in an interview.

He insisted that despite the years-long campaign against Hizmet, the group had not resorted to violence, and the idea it would do so now with a coup “makes no sense.”

He said he and his Zaman colleagues have been publicly condemning the coup attempt and would have joined protesters in the street if not for the tense atmosphere. “If I go outside and someone recognizes me … if someone says they are Hizmet, they will almost certainly be lynched right now,” he said.

Aside from Hizmet, Ankara is sifting through the military to find who was behind the coup attempt.

The prime minister, Yildirim, has said more than 6,000 coup supporters have been arrested, including 2,800 members of the military and top officers in charge of some of the NATO ally’s largest divisions.

A military helicopter landed late Saturday at Greece’s Alexandroupoli airport carrying eight Turkish officers. Ankara has asked Athens to extradite the men, saying they were part of the coup attempt, and while the helicopter since has been returned to Turkey, the officers have not.

It marked the first time Turkish military staff have sought refuge in Greece, a country with which Turkey has been at odds for centuries – they almost went to war in 1996 over an uninhabited islet in the Aegean and have been in contention for decades over the still-divided island of Cyprus.

A lawyer for the officers said the men have been charged with illegal entry into Greece, knew nothing about the coup and were ordered to carry some of those injured in the uprising in their helicopter for medical treatment. The officers have applied for political asylum.

Those arrested from the air force were just one part of a faction in the military identified by authorities as participating in the attempted uprising.

Gen. Akin Ozturk, who commanded the air force until August, has been arrested. And Gens. Erdal Ozturk,  Adem Huduti and Ekrem Caglar, who commanded the 1st, 2nd and 3rd army divisions, respectively, have been detained, as has Rear Adm. Nejat Demirhan of the coast guard.

President Erdogan’s top military aide, Col. Ali Yazici, also has been detained. Yazici is normally with Erdogan at all times, but the night of the coup, he was in Ankara, and is alleged by the government to have participated in the hostage-taking of Fahri Kasirga, a top presidential aide.