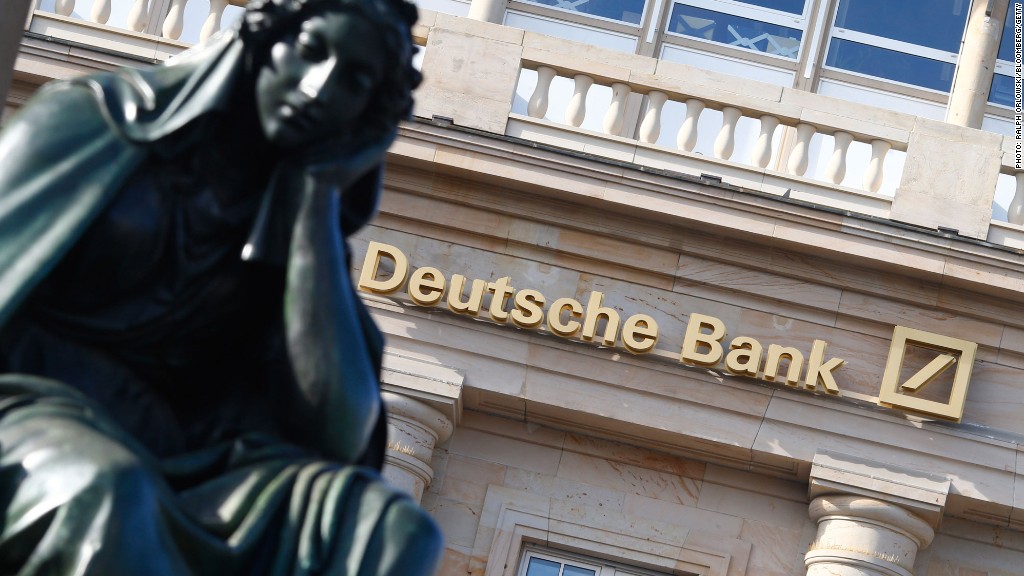 Deutsche bank (DBK) shares dropped to fresh new lows with the various news announcements, as well as a feeling that Germany will not be capable of bailing out the bank. The imminent outcome for DBK is “bankruptcy” while the world will have to bear the brunt of the fallout from all of the complicated “derivatives”, which are being held by DBK.

Amongst all of the chaos, DBKs’ head of currencies trading and emerging-markets debt trading, Ahmet Arinc, has left the company, which is the most recent negative news to impact the banks’ financial status. Traders slammed the stock by more than 6% during that trading session to touch intraday lows of $12.5 after which the stock recovered marginally to close at $12.97.

Germany will not be able to bail out DBK

The latest bank which might require a bailout is the Italian lender Banca Monte dei Paschi di Siena, which is the worlds’ oldest bank. The European Central Bank warned that the Italian bank is holding dangerously high levels of bad debt.

Italy wants a bailout for Monte Paschi, however, the Germans are opposing any such move. Wolfgang Schaeuble, the German Finance Minister, stated in a news conference, in Berlin that Italy intends to stick to the banking-union rules, as was conveyed to him by his Italian counterpart Pier Carlo Padoan.

However, Italy did not wait before hitting back at Germany and it came from none other than the Italian Prime Minister, Matteo Renzi.

Mr. Renzi stated that “the difficulties facing Italian banks over their bad loans are miniscule by comparison with the problems some European banks face over their derivatives.” He reminded the Germans that there were other European banks which had much bigger problems than Monte Paschi, in an indirect hint towards DBK.

“If this non-performing loan problem is worth one, the question of ‘derivatives’ at other banks, at big banks, is worth one hundred. This is the ratio: one to one hundred,” Renzi stated, according to Reuters.

More troubles ahead for DBK

The bank is likely to lose its’ place in the STOXX 50 index, according to analysts at Societe Generale. The bank will face renewed selling pressure as the index funds will have to reposition themselves, post the change, which is more than likely to bring about a fresh round of selling.  According to a statement by the International Monetary Fund, DBK is now the most dangerous bank in the world. DBK is currently the riskiest bank, which will bring down the entire financial banking system globally.

Gold is the key asset to own

The bond king, Jeff Gundlach, stated that “things are shaky and feeling dangerous.” Regarding the European banking crisis, the Double Line bond king noted: “Banks are dying and policymakers don’t know what to do. Watch Deutsche Bank shares go to single digits and people will start to panic…you’ll see someone say, ‘Someone is going to have to do something.’”

Gundlach stated that “gold remains the best investment amid fears of instability in the European Union and prolonged global stagnation, as well as concerns over the effectiveness of central bank policies,” reports Reuters.

The belief by Wall Street that Germany will not allow DBK to fail is fading. Post the Brexit, tensions are running high among the remaining members as seen in the spat between Germany and Italy. Due to the earlier hard stance of the Germans, it is likely that any move to bailout DBK will face considerable resistance from all of the member nations. If allowed to fail, DBK will cause a “crisis” many times over that of which Lehman Brothers did. The final meltdown commences.

Americans need to pay attention to this European financial crisis because it’s very contagious and going to spread here.

Gold remains the asset to invest in, as I have been advising my subscribers for a long time now. DBK is failing and not even the European Central Bank will be able to stop its plunge into oblivion.

Next week, I will share with you another asset class rarely mentioned or invested in which could explode in value going forward and actually become a major asset/currency world wide – stay tuned!