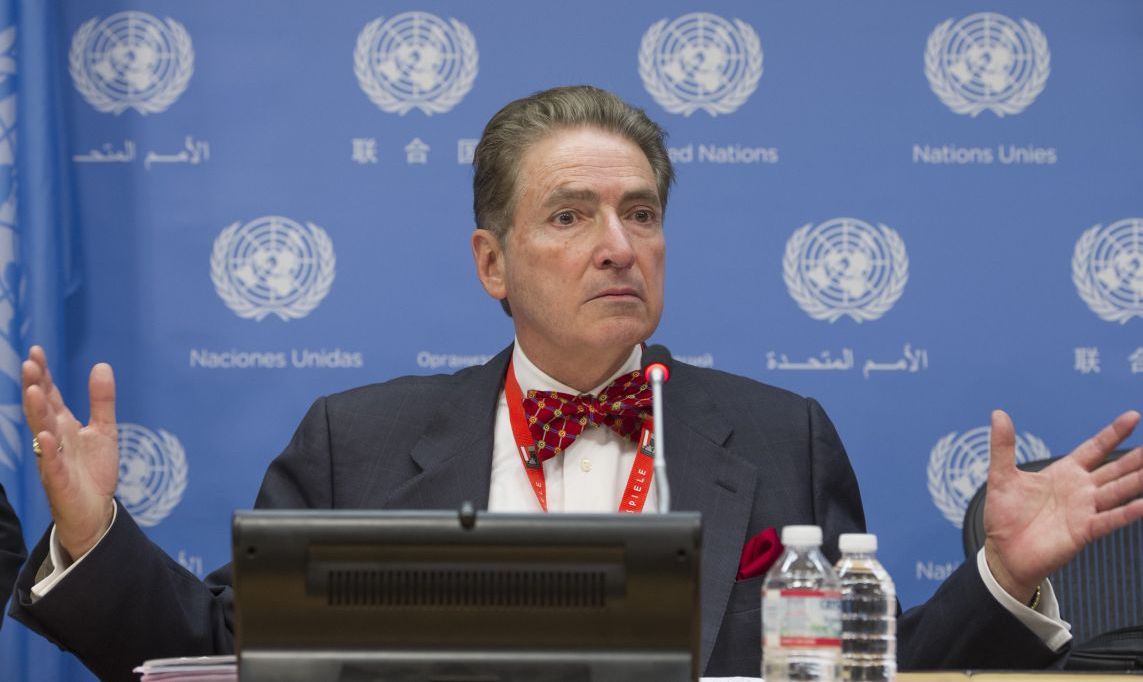 Press Conference by Mr. Alfred de Zayas, Independent Expert on the promotion of a democratic and equitable international order.

he United Nations human rights legal expert expressed concerns over the various corporate trade deals, e.g. TTIP, CETA, CISA, TTP,  that were all discussed under the public radar, in defiance to all established democratic norms.

“The TPP is fundamentally flawed and should not be signed or ratified unless provision is made to guarantee the regulatory space of States,” said the UN Independent Expert on the promotion of a democratic and equitable international order in a statement* made public today.

The expert’s appeal comes on the eve of the gathering of the trade ministers in Auckland, New Zealand, on 4 February 2016, to sign the TPP, a trade agreement among twelve Pacific Rim countries that will strengthen the position of investors, transnational corporations and monopolies at the expense of the public, and will impact negatively on labour standards, food security, health and environmental protection.

“Trade agreements are not ‘stand-alone’ legal regimes, but must conform with fundamental principles of international law, including transparency and accountability,” Mr. de Zayas stressed. “They must not delay, circumvent, undermine or make impossible the fulfilment of human rights treaty obligations.”

In his statement, the Independent Expert expressed concern that, despite “enormous opposition by civil society worldwide, twelve countries are about to sign an agreement, which is the product of secret negotiations without multi-stakeholder democratic consultation.”

“The options are not to sign the TPP as it stands, as civil society demands, or not to ratify it, which is the responsibility of democratically elected parliaments,” the expert noted. “Should the TPP ever enter into force, its compatibility with international law should be challenged before the International Court of Justice (ICJ)”.

“If a public referendum were held in all twelve countries concerned, it will be solidly rejected,” Mr. de Zayas stated.

Mr. Alfred de Zayas (United States of America) was appointed as the first Independent Expert on the promotion of a democratic and equitable international order by the Human Rights Council, effective May 2012. He is currently professor of international law at the Geneva School of Diplomacy. Learn more, log on to: http://www.ohchr.org/EN/Issues/IntOrder/Pages/IEInternationalorderIndex.aspx

Read the Independent Expert’s 2015 report to the UN General Assembly on the incompatibility of ISDS with human rights norms (A/70/285):
http://www.un.org/en/ga/search/view_doc.asp?symbol=A/70/285

The Independent Experts are part of what is known as the Special Procedures of the Human Rights Council. Special Procedures, the largest body of independent experts in the UN Human Rights system, is the general name of the Council’s independent fact-finding and monitoring mechanisms that address either specific country situations or thematic issues in all parts of the world. Special Procedures’ experts work on a voluntary basis; they are not UN staff and do not receive a salary for their work. They are independent from any government or organization and serve in their individual capacity.