Can the law stop Brexit? 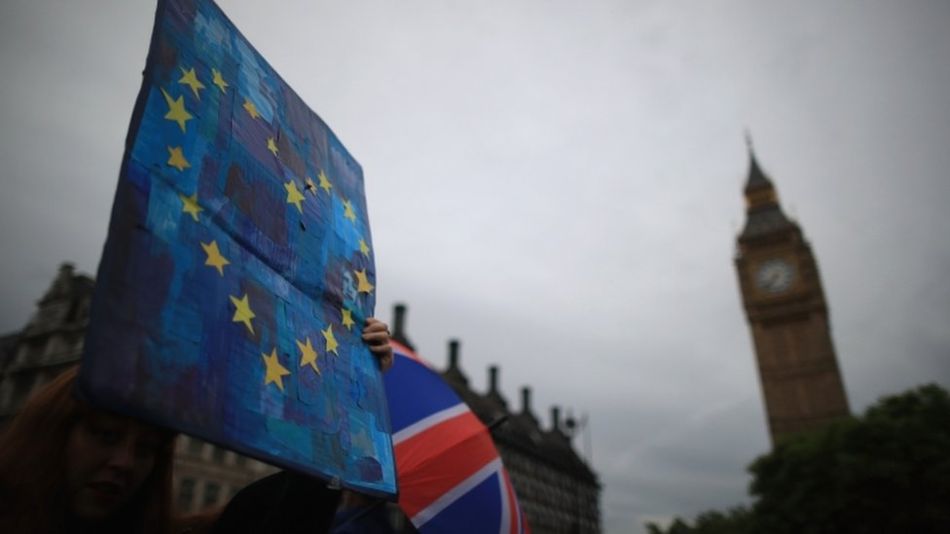 Can the law stop Brexit?

_
As the dust settles after the UK vote to leave the EU, lawyers are picking over the landscape and legal opinions are emerging as to how the UK’s departure from the European Union might be slowed or even stopped.

They fall into three main areas:

It has come as a shock to many that the referendum result itself is not legally binding in UK law and it alone does not trigger the UK’s departure from the EU.

That has to be done under the withdrawal process laid down in Article 50 of the Lisbon Treaty.

In other words, the referendum has changed nothing legally but everything politically.

Article 50 is the mechanism by which the UK has agreed to end its 40-year relationship with the EU.

Once notice is given by the prime minister, the clock starts ticking and there is a two-year time limit to negotiate an exit deal.

That time period can be extended only with the unanimous agreement of the remaining 27 member states.

_
If there is no extension, the UK ceases to be a member of the EU on the conclusion of an agreement within the two years, but in any event two years after notice has been given.

Article 50 says any EU member state can leave “in accordance with its own constitutional requirements”.

That phrase has given lawyers pause for thought as to what is lawful under our constitution.

In a piece co-authored by three legal experts, for the UK Constitutional Law Association, it is argued that under our constitutional settlement, the prime minister cannot issue a notification under Article 50 without being given authority to do so by an act of Parliament.

The argument rests on the fact that without Parliament’s backing any prime minister would be exercising what are known as prerogative powers.

These are a collection of executive powers held by the Crown since medieval times and now placed in the hands of ministers.

They are often used in foreign affairs Parliament has largely left to the government.

However, case law establishes these executive powers cannot trump an act of Parliament.

Legislation can only be altered by legislation.

And so, by extension, if a prime minister triggered Article 50 and so put the UK on a one-way road out of the EU without Parliament’s backing, he or she would be overriding the 1972 European Communities Act, which provides for the UK’s membership of the EU and for the EU treaties to have effect in domestic law.

The Article 50 process would cut across and emasculate the 1972 act, and so, the argument goes, the prime minister needs the backing of a new act of Parliament to give him of her the constitutional authority to push the Leave button.

_
Writing in the Times newspaper, the crossbench peer Lord Pannick QC, an eminent specialist in public law, said: “Whether Parliament would enact legislation to allow for an Article 50 withdrawal is a matter for it.

“However, without such legislation, the prime minister cannot lawfully give a notification.”

Similar views have been expressed by Lord Lester QC and Sir Malcolm Jack, a former clerk to the House of Commons.

There is also an attempt to crowd-fund legal advice on the issue: “Should Parliament decide?”

The Crowd Justice website says a legal challenge could be “the most important public law case in living memory”.

If it was decided that a prime minister acting alone under prerogative powers lacked the constitutional authority to trigger Article 50, an act of Parliament would need to be passed giving him or her that authority.

The passage of that act would of course provide the opportunity for MPs (a majority of whom favour Remain) to express their views on Brexit and in theory vote according to their consciences.

However, it seems constitutionally inconceivable that Parliament would fly in the face of the Leave vote secured through a national referendum and refuse to pass an act that gave the prime minister authority to begin the “divorce” process.

Scotland’s first minister has raised the prospect of Scotland attempting to block a Brexit. Could it?

The short answer is: “No.” But how could it try?

_
Nicola Sturgeon is referring to a parliamentary convention, known as the Sewel convention, that says the Westminster Parliament will not normally legislate – ie interfere – on devolved matters, without the consent of the devolved parliament.

The Scottish Parliament’s powers are limited by EU law.

So, the argument would be that if Brexit legislation enacted by the UK removed those limits, it would free the Scottish Parliament to make laws that breached EU law.

That would be to alter its powers, and that triggers the need to get the Scottish Parliament’s consent under the Sewel convention.

So, could the Scottish Parliament block Brexit by withholding consent?

The UK Parliament is sovereign.

Under devolution, it authorised devolved legislatures to make law in certain areas.

However, it retained the right to make any law it liked.

Consider also that Article 50 arguably does not need legislation and can be triggered by a prime minister using prerogative powers.

In other words, the two-year period could run its course without any agreement and thus any legislation by the UK Parliament.

That would mean the Scottish Parliament would have no legislation to withhold its consent from.

More significantly, the Scottish Parliament cannot block UK legislation on Brexit or any other issue.

It can withhold consent, but the UK Parliament can override that.

The petition calling for a second EU referendum has been signed by more than four million people.

It was, ironically, created by Leave supporter Oliver Healy, before the referendum, when a Leave victory looked unlikely, in an attempt to make things harder for Remain.

It called for a change in the referendum rules requiring a second vote if either side achieved less than 60% on a turnout of less than 75%.

Before the vote, it had 22 signatures.

The sovereignty of Parliament is a cornerstone of our constitution, so it is possible it could pass a law calling a second referendum.

However, although constitutionally possible, this is politically unthinkable.

It would take something akin to a revolution and full-blown constitutional crisis for it to happen.

If the petition grew to show a clear majority of the electorate now favoured Remain, that might be tantamount to the revolution and might possibly trigger the unthinkable.

But four million is a long way off that.

While lawyers may raise arguments, it seems impossible to see a legal challenge stopping the great democratic juggernaut now chuntering towards the EU’s departure gate.

There are times when politics simply outstrips the law.