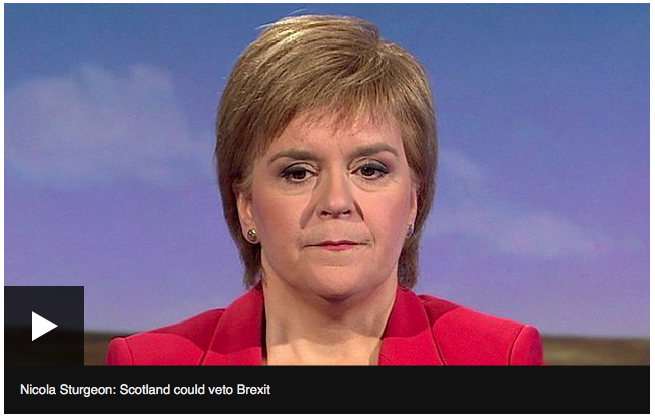 _
Scotland’s First Minister Nicola Sturgeon has told the BBC that Holyrood could try to block the UK’s exit from the EU.

She was speaking following a referendum on Thursday which saw Britain vote by 52% to 48% to leave Europe.

However, in Scotland the picture was different with 62% backing Remain and 38% wanting to go.

SNP leader Ms Sturgeon said that “of course” she would ask MSPs to refuse to give their “legislative consent”.

However, Scottish Secretary David Mundell said he “personally” did not believe that Scotland could block Brexit.

In an interview with the BBC’s Sunday Politics Scotland programme Ms Sturgeon was asked what the Scottish Parliament would do now.

Ms Sturgeon, whose party has 63 of the 129 Holyrood seats, said: “The issue you are talking about is would there have to be a legislative consent motion or motions for the legislation that extricates the UK from the European Union?

“Looking at it from a logical perspective, I find it hard to believe that there wouldn’t be that requirement – I suspect that the UK government will take a very different view on that and we’ll have to see where that discussion ends up.”

When Ms Sturgeon was asked by presenter Gordon Brewer whether she would consider asking the parliament not to back such a motion of legislative consent she replied “of course”.

She added: “If the Scottish Parliament was judging this on the basis of what’s right for Scotland then the option of saying look we’re not to vote for something that’s against Scotland’s interest, of course that’s got to be on the table.”

Earlier on Sunday, Ms Sturgeon said that she and her colleagues would begin talking to Brussels officials next week about Scotland remaining in the EU.

The day after the full result was known, the Scottish leader confirmed that a second Scottish independence referendum was back on the table.

In September 2014, people in Scotland voted to stay a part of the UK.