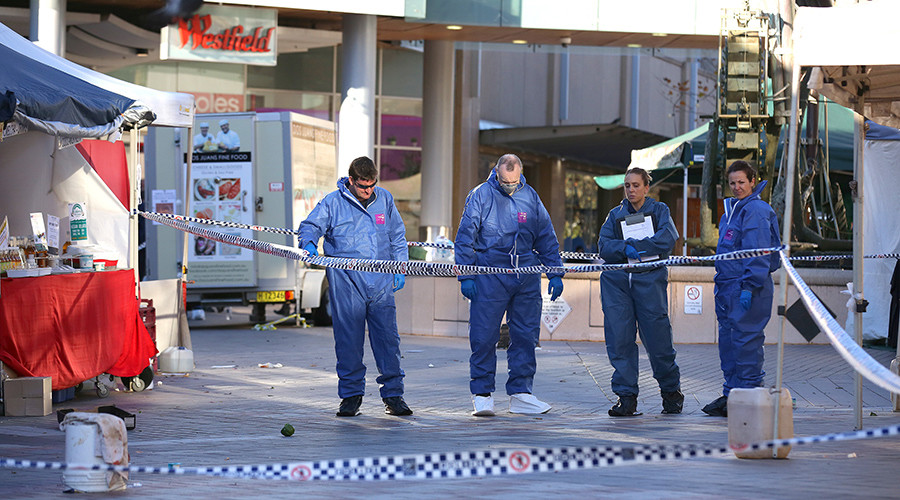 Police forensic services examine the scene of a police shooting of a man brandishing a knife at a shopping centre in the Sydney suburb of Hornsby, Australia June 9, 2016 © David Moir / Reuters

Police in Sydney opened fire at an escaped psychiatric patient after he shouted “Allahu Akbar” Three passersby were shot in the process.

Two officers opened fire at the Hornsby Westfield Mall as 23-year-old patient Jerry Sourian, armed with a knife, wandered around the center babbling and shouting.

Three bystanders were injured; all three women aged over 60 who are now recovering in hospital. Among them is an 82-year-old who was hit by police fire in the back, and a 65-year-old, wounded by bullet fragments in her lower leg.

In a video of the shooting that emerged, shocked screams are heard when police fire and shout, “Get down on the ground!” A police officer is heard apologizing to one of the women. “Ah, s***! I’m so sorry, so sorry,” a voice says.

The incident took place on Thursday, and on Friday police were forced to defend their actions. An investigation has been launched by critical incident officers looking into why other options were not used, such as a Taser, AAP news agency reports.

“In a life-and-death situation police had to make a very critical decision on the actions they took. It’s alarming [that bystanders were injured], but I wonder what may have happened had the police not intervened and stopped this person with a knife,” Assistant Commissioner Denis Clifford told reporters Friday.

Witness Guillaume Schmidtt also told 7 News that police “tried to shoot him [Sourian], but they missed him so this is why they shoot someone else in the crowd.”

James Yeom, a store owner at the mall, said he saw the man holding what appeared to be a kitchen knife and called police straight away.

“He was just wandering around the fountain area. A lot of people didn’t realize what was happening,” Yeom told 7 News.

He said police appeared to miss two shots at the suspect before hitting the man with a third.

A few sources close to the investigation have told Fairfax Media that the suspect was involuntarily admitted to Hornsby Hospital’s Mental Health Intensive Care Unit several weeks ago due to schizophrenia. His doctor’s report clearly stated that Sourian should not be released under any circumstances.